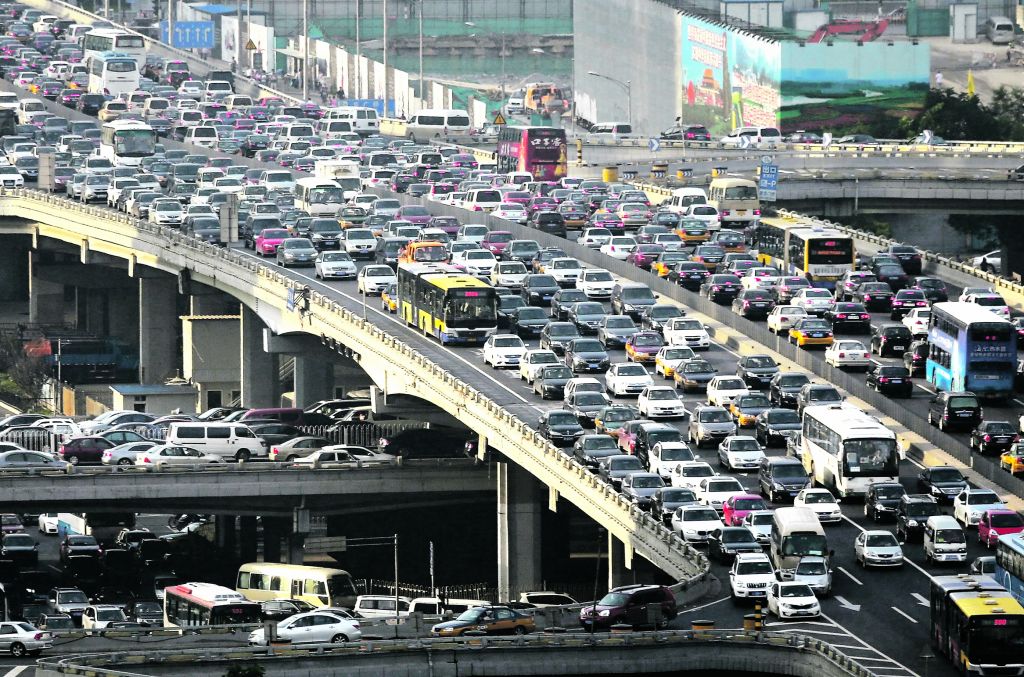 According to the Department of Transportation, the average American spends upwards of 35 hours a year sitting in traffic. Given that this is an average gleaned from all across the country, those of you living in places like Los Angeles, Boston or Miami are probably scoffing (and honking your horns) at this relatively low number. Those of you from more rural areas are probably wondering how city folk could throw so much of their lives away. Regardless of where you live and how much of your life you spend in traffic, we think we can all agree that these jams put a little gridlock in perspective with the worst traffic jams.

This pick on our list of worst traffic jams slowed down vehicles over 100 kilometers for about two weeks.

On September 11, the horrific assault of the World Trade Center resulted in a lockdown of bridges and tunnels.

The city traffic was at a halt, but emergency vehicles were allowed to get through. Air traffic was also grounded, leaving lots of travelers in the US stranded.

This was one of Asia’s worst traffic jams in the ’90s.

This terrible traffic jam was caused by people going home after holidays and evacuation because of a typhoon warning. This caused an incredible amount of traffic in Japan’s capital on August 12, 1990.

There have been talks about the worst traffic jams across the globe. This one deservedly belongs on the list.

On November 30, 2012, a snowstorm buried Highway M-10. This was bad because this is the road between St. Petersburg to Moscow.

The Moscow traffic jam was one of the worst and longest traffic jams in the history of Moscow. The congestion lasted for three days.

This was a bad time to go to Paris on vacation. Inclement weather caused a massive gridlock about 109 miles long.

This congestion happened in 1980 and is a good candidate for the list of worst traffic jams in history.

Hurricane Rita was approaching Houston, so all residents were asked to leave on September 21, 2005.

But the category 5 hurricane turned into a category 3 and never actually hit the city. The panic that was induced did result in one of the worst traffic jams of the country, with people being stranded in their cars 20+ hours. Many became impaired or died because of heat strokes, many fights broke in, and a bus carrying senior citizens even caught fire.

The Berlin Wall had fallen, and the Germans were traveling for Easter to reconnect with family members and friends they had been separated from.

This happened on April 12, 1990. Approximately 18 million cars were on the roadway.

This was one of the worst traffic jams in the history of the United States. It started with 20 inches of snow on February 1, 2011.

The traffic was slowed for 12 hours, particularly for those who were heading north on Lake Shore Drive.

This one was one of the worst traffic jams because people died as a result.

This jam lasted for three days and killed 12 people, some from fatigue. The traffic was caused by thousands of people heading home after a major holiday.

In 2010, a group of “musicians” pulled off one of the most thoughtless, ill-conceived publicity stunts in recent memory.

The three members of the Imperial Stars climbed on top of a van in the middle of the CA 101 Freeway and began jamming away. This led to a mile-long backup and, fortunately, their arrests and a nearly $40,000 fine.

If you set out for a drive on the Beijing-Tibet Expressway in August of 2010, we hope you brought nearly two weeks of food and water along with you. That’s how long some cars were stuck in one of history’s worst traffic jams.

More than 60 miles of roadway were choked with tens of thousands of cars for what became a 10+ day odyssey of gridlocked hell. The cause? Construction meant to ease congestion, of course.

From the 15th to the 18th of August, 1969, Woodstock gained two notable distinctions. First, it became forever synonymous with the music and culture of the counter-culture. Second, it “hosted” one of the worst traffic jams.

The jam stretched for more than 20 miles and lasted for more days than the iconic concert itself. It was largely caused by music fans simply ditching their cars and heading for the venue on foot.

In February 2018, there were 10,000 cars that were stuck in a major traffic jam after a holiday. It happened at the end of China’s seven-day holiday, Lunar New Year.

The cars stretched back over 6.2 miles because there was heavy fog throughout the area.

L.A. has got nothing on the world’s worst traffic, it turns out. Even Beijing with 20 million residents and Moscow with its famously loose enforcement of traffic laws don’t have the worst traffic. It seems that lovely Brussels, Belgium, takes the cake when it comes to wasting motorists’ time.

The average Belgian driver living in and around Brussels can expect to spend more than 80 hours in traffic a year.

Well, the torch has been passed once again, and Los Angeles has taken the dubious crown back from Honolulu as the American city with the worst traffic conditions.

The average Angeleno’s commute is hampered by at least 30 minutes of traffic regardless of distance. L.A.’s population density ranks near the top of the domestic scale, and its public transit system is ranked near the bottom, so what do you expect, really?

So next time you’re in traffic, be grateful that you’re not caught in traffic jams like the ones on our list!