The Top 5 Most Garish Celebrity Graves 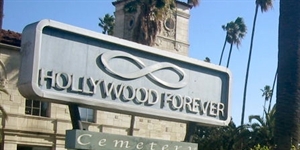 We’ve grown accustomed to celebrity excess: our movie stars get into trouble with the law over everything from drugs to drunken car crashes, our sports stars forget they’re off the field and get charged with disorderly conduct/assault and our musicians or (worst of all) reality TV stars conduct themselves with such a smarmy sense of entitlement we wonder how humanity managed to create both the pyramids of Giza and the suddenly vaguely mustachioed Justin Bieber. Given the largess of our culture’s most self-aggrandizing celebrities, it should come as little surprise that, for many stars, the excess hardly halts just because life has. Just take a look at some of these garish celebrity gravesites. 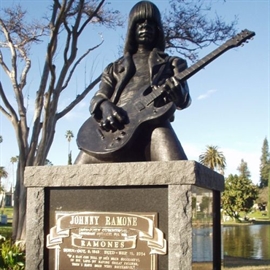 If you’re looking for a gravesite marked by introspection and humility, you might want to look elsewhere than the tomb of famed punk rocker Johnny Ramone. Flanked by towering palms and a manmade lake, a statue of the rocker perches forever atop a black stone tomb, digging into a guitar just as he did in life. The plaque beneath him sports a quote, his birth name, his years alive (1948 – 2004) and the humble description of Johnny as the “Legendary Guitarist for the Ramones.” Which… he was, really, so who are we to be clucking our tongues? 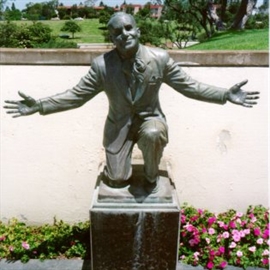 Maybe the kids these days don’t get worked into a frenzy when they heard the name Al Jolson, but at one time he was known by many as “The World’s Greatest Entertainer.” That time was the first half of the 20th century, as Mr. Jolson died in 1950. His heyday corresponded with the Golden Age of silent movies and coincided with the first “talkies.” In fact, Jolson starred in the first major talking motion picture, “The Jazz Singer.” To match his once monolithic stature, his gravesite features a terraced fountain, a large finely carved tomb, a statue of Jolson and other pertinent details. 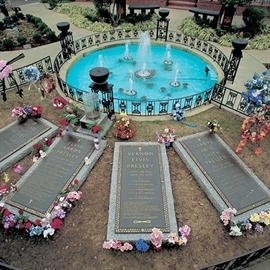 The King resides in death where he spent much of his life, the Tennessee mansion he had built for himself which he named Graceland. Presley was initially buried in a large mausoleum at a cemetery in Memphis, but his ardent fans kept trying to take mementos away from the site, so finally his body was moved back home where it could be monitored more closely. He rests near a fountain, by a large marble statue of an angel and is surrounded by buried family members. His original crypt was put up for sale last year. 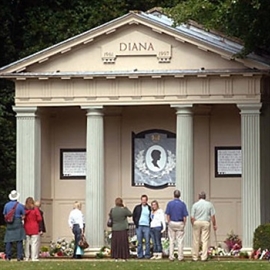 Every bit a celebrity in the modern sense of the word, Princess Diana was laid to rest in high style. Meaning wildly elaborate style. Her gravesite surpasses that of most any other individual since Khufu. Her body rests in a mausoleum built atop a small island called The Oval. Thirty-six trees, one for each year that she lived, are planted on a walkway approaching the gravesite, and swans patrol the moat around The Oval. All this is located on a 14,000 acre estate that has been in the family for generations. 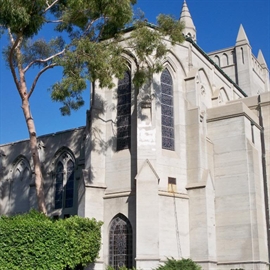 The King of Pop is also the undisputed King of Ridiculously Ostentatious Gravesites. Michael Jackson’s life was, in many ways, a sordid affair, marked by both celebration and controversy, loneliness despite world renown and capped off with a tragic death. In 2009, his body was interred at the Great Mausoleum in the Holly Terrace section of the Sanctuary of the Ascension in the Forest Lawn Cemetery of Glendale, a city near Los Angeles. The Great Mausoleum was not created for MJ or anything like that, mind you, but it is one of the most exclusive burial sites in the country, closed to the public and reserved for only a select few of the richest, most famous, most dead people in our country.

5 Animals That Were Charged With Crimes 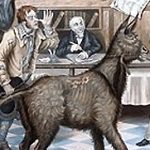