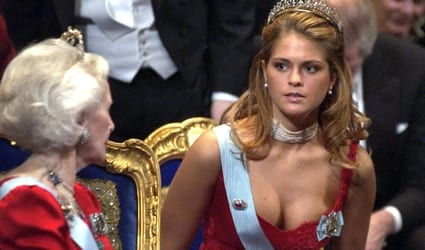 Despite the adoration we have for movie and television stars, we still hold a soft spot for the original celebrities – royalty especially the real princesses.

Every little girl dreams of growing up to be a princess, while young men dream of one day winning a princess’s heart. Especially a hot one. Here to excite/frustrate your fantasies of one day winning that fair, royal hand are five real princesses who are really easy on the eyes.

Ok, so yes, technically Catherine Middleton became the Duchess of Cambridge upon marrying Prince William, she does not technically have the title “princess.”

But if Kate Middleton can’t be called a princess, then no one can. And we don’t even mean that derisively!

She rose from comfortable but common roots to be one of the most famous women alive and mother to the heir to the British throne!

Also, she has managed to maintain a sense of poise and elegance without losing the humility we like to see in our royalty (yes, we’re looking at you, Henry VIII).

Even three decades after her death, Grace Kelly still holds the honor of being the hottest princess of all time. She was a great actress, a refined woman of, well, grace, and damn was she fine.

And if you find another princess, who won an Academy Award for acting, then give us a call. But for now, Princess Grace reigns supreme.

After their divorce, her life was thrown into the public spotlight. In 1997, she died in a tragic car crash.

If you have been living under a rock, you know Meghan was a famous actress in America before she married Prince Harry. She was born and raised in Los Angeles by a single mother. She’s not an official “princess” as she does not come from royal blood, but Duchess is good enough for us!

In May 2018, the wedding was broadcasted all over the world recently and we were all wishing we were just like her.

Beatrice and Eugenie, Princesses of York

The two real princesses are most known for their style, including some memorable hats, but they usually quiet about their personal lives.

Both Beatrice and Eugenie are British princesses by birth.

At the age of 37 with the looks of a fashion model, Princess Tatiana is deservedly one of the hottest real princesses in the world and despite this, she is regarded as a very down-to-earth person.

According to Vogue, she said shortly after her wedding to Prince Nikolas of Greece, ” I do not feel like a princess. I do not feel that I married a prince, with a title. Well certainly, yes he is my prince, but nothing more.”

Before her marriage, she worked as an event planner and publicity consultant.

She is one of the hottest real princesses no doubt despite her age. Princess Haya was born to King Hussein of Jordan and is married to Sheikh Mohammed bin Rashid Maktoum, the prime minister of the United Arab Emirates and ruler of Dubai.

On this list of real princesses, Princess Haya is one of the oldest but that does not excuse the fact that she is considered one of the most fashionable royal women in the world. She is also an avid sportswoman who has participated in a number of sporting events for her birth country and is the president of the international Jordan Athletes cultural Association.

She is another example of a normal person who became a real princess. Prior to being a royal, Princess Letizia was a journalist who worked for CNN and had also been previously married for a year.

Apart from being a head-turner, her sense of style is said to amazing. She got married to King Felipe VI of Spain in 2003 while he was then Prince of Asturias. After Prince Felipe’s father, Juan Carlos 1, abdicated the throne in 2014, Felipe and Letizia became King and Queen of Spain.

She is not only one of the real princess in the world but she holds a considerable amount of influence in the middle east especially in the Arabian region. In 2015, she was said to be the most powerful Arab woman.

Ameera is the daughter of Aidan bin Nayef Al-Taweel, a member of the ruling house of Saud in Saudi Arabia. She is one of the most desirable women in the world and she is also reported to be a philanthropist and a progressive who has contributed to the empowerment of Saudi women.

Outside these qualities, she is also regarded as one of the most stylish and fashionable royals in the world.

The list of real princesses wouldn’t be complete with mentioning the second daughter of the king of Sweden. Princess Madeleine is not only royal by blood but she is considered as one of the hottest royals in the world. In 2011, she was the most beautiful royal princess of all time.

She is third in line of succession to the Swedish throne.

What is it about statuesque blonde former Olympic swimmers that attract men of royal blood? Perhaps, we will never know, but nonetheless, something drew Albert II, Prince of Monaco to her. And it surely had nothing to do with her being 20 years his junior.

Charlene Lynette Wittstock won multiple races as a competitive swimmer, both in her native South Africa and around the world, but never managed to medal in any Olympics.

Get ready for a mouthful of a name… this young royal’s full name is Alexandra Jose´phine Teresa Charlotte Marie Wilhelmine of the House of Bourbon-Parma. She is supposedly related to almost every other living member of any European royal family. And she’s pretty hot, too.

Princess Alexandra is still working on her education, much of which she has undertaken in the United States, and is an avid sports enthusiast. What she’ll do once she has blossomed into a fully grown woman, we can only guess, but we’re assuming the paparazzi will be there to keep us informed.

When your grandmother is Grace Kelly, chances are you’re going to turn out looking pretty damn fine. And that’s just what happened to Princess Charlotte Casiraghi, a stunner who is fourth in line to the throne of Monaco.

She is also, therefore, not exactly what you would call poor. Princess Casiraghi splits her time between “official duties” such as overseeing equestrian events and journalism.

She has an active social life, much of which involves flashing sultry looks at cameras.

Sikhanyiso is is the current Minister of ICT of Eswatini. She is the eldest daughter of King Mswati III of Eswatini. Sikhanyiso is the first child of Inkhosikati LaMbikiza and has more than two hundred blood-related uncles and aunts through her grandfather, King Sobhuza II.

He had seventy wives and two hundred and one children. She is also one of his one thousand grandchildren in the Royal Swazi House of Dlamini.

The fierce princess is also a member of the King’s Advisory Council, is a Global Ambassador of Limkokwing University, the Director of MTN Board and the founder of  Imbali Foundation.

The princess is the daughter of the 4th King of Bhutan Jigme Singye Wangchuck and Queen Mother Ashi Tshering Pem. She is a half-sister of the 5th King, Jigme Khesar Namgyel Wangchuck.

She went to the United States to get her bachelors and masters degree. Her goal is to work with children all over the world and to make a difference.

Princess Tessy is the estranged wife of Prince Louis of Luxembourg. They announced their divorce on January 2017 and their divorce will be handled in the United Kingdom court.

She and her twin brother joined the Luxembourg army and they eventually rose to the rank of Corporal.

Played by the late Carrie Fisher, Princess Leia was one of the Rebel Alliance’s greatest and fearless leaders on the battlefield Sister of Luke Skywalker. Her outfit when she was Jabba’s slave is one of the most famous (and hot) of all time.

With a soft spot for scoundrels, Leia ranks among the galaxy’s great heroes.

Lily Collins played Snow White in the live-action adaptation of Mirror Mirror. Snow White, an orphaned princess, is the rightful ruler of her kingdom.

Princess Giselle from the movie Enchanted, who was played by Amy Adams, is a young woman originally from the animated world of Andalasia.

She now lives in the live-action world, in New York City, with Robert Philip and Morgan Philip.

Mia was just a geeky girl who undergoes a transformation after finding out that she is really a princess.

Emma Watson played Belle in the live-action adaption of Beauty and the Beast.

People praised her character because she was kind-hearted and her singing voice was beautiful!

Drew Barrymore played Danielle in Ever After, which is a film based on Cinderella.

Danielle was a poor girl who was a cook and cleaner for her stepmother. After, she fell in love with a boy who was a prince.

After an evil women, Ravenna, killed her father, Snow White must escape to save her kingdom.

Snow White, who is played by Kristen Stewart, joins an army to destroy her stepmom and save everyone she loves.

She is a farm girl who lives in the country of Florin and is the true love of Westley.

Julia Stiles played Paige Morgan, who is your typical American girl who falls in love with an undercover prince.

Later on, she becomes the princess of Denmark.

Anna Kendrick slips on Cinderella’s glass slipper in Disney’s Into the Woods.

In this movie, Cinderella was joined by a few other characters and a lot of musical numbers.

Princess Margaret’s struggle with being a modern woman and part of a monarchy steeped in tradition is portrayed perfectly by Vanessa Kirby in The Crown.

Natalie Portman was the breakout star in Star Wars. She played Padmé Amidala who was a courageous, hopeful leader, serving as Princess, then Queen and finally Senator of Naboo.

And spoiler alert: she is technically Luke and Leia’s mom!

Lily James plays Cinderella in the (another) live-action adaption of the infamous character.

After losing her mother at a young age, Cinderella promises to follow her mother’s dying wishes: to have courage and be kind. She grew up to be a strong woman who married a prince!

Even though 2014’s Maleficent was all about the red-lipped villain, who was played by Angelina Jolie.

There was a breakout star who was the beautiful Princess Aurora, played by Fanning.