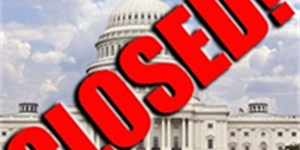 Well, it happened. Contrary to all pragmatism and in complete dereliction of their duty to American citizens, law makers have allowed the government to “shut down” by not passing a budget deal to keep myriad federal sectors and services funded. In a stomach-turning display of intransigence, a divided congress has allowed disagreement over single wedge issue—the Affordable Care Act AKA Obamacare—to wreak havoc on a scale not seen since 1995, the last time the government went through a shutdown. Here are the first 5 effects of this debacle that most Americans can expect to feel.

The Dow Jones Industrial has fallen several hundred points in the first two days of this week, and the NASDAQ has been jumpy at best. Investors have their eyes on lawmakers this week, and a protracted shutdown caused by the latter will almost surely lead to a selloff by the former. While past shutdowns have not led to nosedives for the stock market, they have almost always led to some dip, with the average hit being around a 2% drop in market value. The longer the shutdown lasts, though, the worse it gets.

4 Nature Is Closed for Business

Dozens of parks operated by the National Park Service will begin hanging “CLOSED” signs across their gates today. Everything from Yellowstone to Yosemite will suddenly be off limits to visitors. In the ultimate irony, the Statue of Liberty also falls under the purview of the National Parks system, so the very symbol of America’s enduring values will go dark until our government figures out how to do its job.

3 Residents of D.C. May Soon Be Living in a Trash Heap

During the 1995 shutdown, almost all services in our nation’s capital shut down. Emergency responders stayed in business, but beyond police, fire and EMT personnel, almost every other service came to a halt, and that included trash collection. This time around, Washington has tapped a small cash reserve and labeled more city services as “essential,” but if this shutdown lasts more than a couple of weeks, D.C. could see trash piling up.

2 Science Is Closed for Business

Fully 97% of employees of NASA (it is the National Air and Space Administration, after all) will be heading home until the shutdown is over. The NIH (yep, National Institutes of Health) won’t start any new clinical trials of medicines or treatments and the Centers for Disease Control and Prevention may even have to cease its annual flu vaccination program for a while. And the EPA? Forget about it! The Environmental Protection Agency is on a forced holiday; sorry, environment—we have a healthcare law to ceaselessly debate.

1 Nearly One Million Workers Will Be Sent Home

And many will be sent home without pay. The actual figure is closer to 800,000 people who will be furloughed, i.e. forced to stay home and temporarily without income. And that means money they are not putting back into the country, and that means a double-whammy to the economy. The Feds can’t appropriate money while the government is stalled, and those not making any money aren’t going to spend a single penny they don’t have to. And the longer the situation lasts, the worse it gets: the White House released an estimate saying a protracted shutdown could cost the nation upwards of ten billion dollars of lost revenue in the first week.