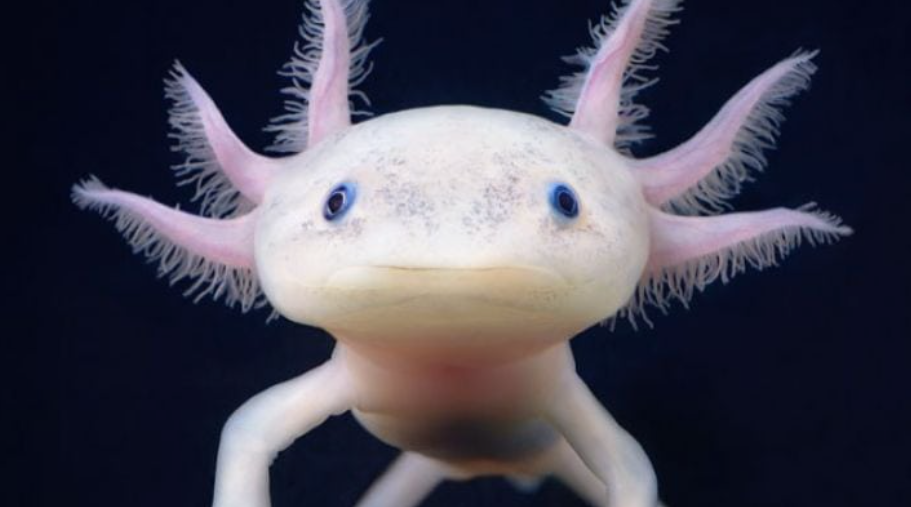 Considering the list of animals on this list, the phrase, “Beauty is in the eye of the beholder,” rises to a whole other level when you consider the weird-looking animals mentioned.

Here are the 24 weirdest looking animals in the world:

A tiny primate in the same family as monkeys, lemurs and humans, the tarsier, from Southeast Asia, looks like a combination of a “Star Wars” Ewok and Yoda. When opened all the way, its eyes—that are enormous—look as if the poor thing just sat on a pencil or something. The eyes are so big, they cannot move; they can only stare straight ahead. The little creature must rotate its neck Exorcist-style to see its surroundings.

But the eyes, while strange looking enough, don’t compare to the weird fingers this freaky animal has. Those look like ET’s. Instead of using them to phone home, this tree-living animal uses them to grip branches. The tarsier is endangered from habitat destruction.

This is not Photoshop. This deer actually has natural fangs but it is not a blood-sucking demon creature of the night or a descendant of Dracula’s Pet. This deer also known as the Water Deer is a herbivore, meaning it feeds primarily on vegetation.

The tusks of the water deer are held loosely in their sockets and can actually be moved about and controlled through facial muscles.

This animal obviously got its name from its huge schnoz securing its place as one of the weirdest animals in the world. Here’s the weird thing about this monkey’s huge nose. It is theorized that these huge sneezers help the male to attract a female mate who also has large sneezers but not as gigantic as the male.

Not only do they have large noses but they also have come packaged with a big pot belly for their special digestive system, enabling them to eat unripe fruit and leaves. They are also said to have almost permanently erect penises.

Don’t be fooled by the size of this creature. This is the Hagfish. It is considered one of the nastiest and weirdest animals in the world.

When it gets hungry, it attaches itself to a passing fish, bores its way through the skin, and then consumes the fish from the inside out. The Hagfish also has 4 hearts. It’s a true monster of the deep.

When you think of a crayfish, you never imagined something other than the smallish version of a lobster. But this crustacean is far from what you imagined. They are larger than your average lobster.

One of the weird things about this crayfish is can potentially live forever, due to its ability to regenerate its body parts. Also, these crustaceans have been around for quite some time and are said to live up to 40 years.

This dog was originally bred in Hungary.

Although they don’t look threatening, these dogs are said to be excellent guard dogs who are very protective of their homes.

It certainly deserves a spot as one of the weirdest animals in the world. Sphynx cats appear completely bald but it’s not true.

While at first glance many individuals feel startled to look at what appears to be a completely naked cat but brace yourself to gently stroke one and you’ll be amazed. The reality is that Sphynx cats are actually covered with a fine layer of soft fuzz!

This animal is not actually a fish, although it looks like one.

It’s an amphibian. This animal is called the “Mexican Walking Fish”. It is also known as the “axolotl.”

Most amphibians grow like this: Eggs hatch into larvae — for frogs, these would be the tadpoles — which metamorphose into adults; swapping gills for lungs along the way. But the axolotl, formally known as Ambystoma mexicanum, stays in its larval form throughout its life.

More often than not, the glass frog is also referred to as the see-through frog, as its internal organs are visible through its transparent abdominal skin.

What makes this animal one of the weirdest animals in the world is that one can actually look inside its body, and see the beating of its heart and the expansion and contraction of its lungs.

You know how sometimes men don’t think using their brains; they make certain decisions using a different body part? Well, there’s a particular fish from Vietnam called the Phallostethus cuulong, and it just cuts to the chase. It doesn’t make any bones about it.

This fish has a penis on its head—actually, its chin. And as if that isn’t weird enough, the organ has a hook on the end that the fish uses to grab a female fish during mating.

The aye-aye looks like a cat in the process of transforming into a vampire. This primate, related to lemurs, chimps, apes, and humans, has teeth like a rat that needs to be worn down because they constantly grow. An interesting feature of the aye-aye is its extremely long, thin middle finger that it uses as a tool.

Did we mention the aye-aye was related to humans? People of Madagascar, where the aye-aye lives, consider this animal to be bad luck (or bad mannered when it flashes that weird middle finger) and kill the poor animals. Because of that, the aye-aye is endangered, but laws now protect it.

The sloth, from the rainforests of Central and South America, moves so slow that algae have time to grow on its fur, which makes the sloth even weirder looking then it already is with its ultra-long arms and little round head. The sloth resembles Chewbacca, the Wookiee from “Star Wars.” (Why do so many strange animals resemble “Star Wars” creatures, anyway?)

Because it’s related to the aardvark and the anteater, two weird looking creatures themselves, the sloth is bound to look odd, especially when it tries to travel on the ground. Its long curved claws on its toes prevent it from walking on the ground; it needs to crawl on its belly and use its claws to pull itself around, which is the reason the sloth lives mainly in trees.

Imagine seeing one of these on the road during an early morning run. You would obviously think somebody just lost their organ due to a rough night. Looking at this image, there is no dispute that this animal looks like a replica of the male genitalia but this animal is neither a penis or snake.

It is an amphibian that was rediscovered in 2011  in South America. Little is known about these animals. They are limbless and generally navigate by utilizing their sense of smell. Due to lack of information about the animal, it is classified as “Data Deficient” by the International Union For Conservation of Nature.

The tapir, mainly from Central and South America, looks like a strange conglomeration of many animals: a pig, an elephant—although one with a nose job—a bear and a hippopotamus. Viewing one with its mouth open reveals big, crooked horse teeth. The tapir, related to a horse, is kind of the ugly cousin.

It’s also related to a rhinoceros, not an animal known for its good looks, but the tapir still would fall behind. The tapir doesn’t care about any of that, though—its penis is so long it touches the ground. The tapir, an animal more than 10 million years old, is sadly, now endangered by predators and habitat encroachment.

Aquarium of the Pacific

These strange creatures live deep in the ocean. They are often hovering just above the sea floor. And their fins look like the ears of Walt Disney’s Dumbo the Flying Elephant, hence their name.

Dumbos swim around by flapping those “ears,” and they can also travel along the sea floor with their tentacles, which they use to capture prey.

Naked mole-rats have a strange appearance and feature. Scientists found that these weird looking animals do not feel pain and they rarely get cancer.

Recent studies discovered the naked mole rat can survive for up to eighteen minutes in an environment without oxygen.

They prefer to blend in to the bottom of the ocean floor by covering themselves with sponges and other sea animals, consuming basically whatever they can find.The Japanese spider crab is a gigantic marine crab and one of the world’s largest arthropods.

It holds a record for largest leg span. The heaviest ever reported specimen was around 42 pounds, making it also the second heaviest arthropod.

The Goblin Shark is not a pretty shark, and that is being nice. In fact, it is probably one of the strangest-looking sharks you are likely to come across. The shark is rarely seen, and it is the only living species of a family of sharks that has otherwise died out.

For that reason, it is sometimes referred to as a “living fossil.”

The panda ant may look cute, but its sting is painful! Even though it has the word “ant” in their name, it’s considered a wasp. Despite sometimes being referred to as the “cow-killer ant,” its sting isn’t the most deadly or painful.

These wasps can be found in Chile and Argentina. They live alone and do not live in colonies. Also, the panda ant is not aggressive.

The Hummingbird Hawk-Moth is an amazing insect that replicates the hummingbird. Like their namesake birds, these large moths are able to hover while feeding on the nectar of flowers.

They also generate a buzzing hum during flight. Like the long beak on most hummingbirds, the hummingbird hawk-moth also has a specialized feeding apparatus – an extraordinarily long, tongue-like proboscis that rolls out from its resting, coiled shape to reach deep inside a flower.

The sea pigs are in fact a type of sea cucumber. They are a group of marine animals that includes sea urchins and starfish. Sea pigs are found in all the world’s oceans.

In some areas, they comprise more than 95% of the total weight of animals on the deep-sea floor. Despite their abundance, most people will never see a sea pig, as they live in the coldest and deepest parts of the ocean.

They lack jaws, eyes and bones, but lampreys and their “primitive” anatomy have survived 360 million years and four major extinctions relatively unaltered.

Modern lampreys attach their circular mouth suckers to unsuspecting fish. After puncturing their host’s skin, they slurp up fishy body fluids before detaching and slithering away.

Males have an elaborate courtship ritual, during which they spread out their black cape until only a bright blue breast plate and blue eyes are visible in an all-absorbing blackness. Then he puts on a dance, moving around a female in semi-circle motions until she’s wooed.

The bird seemingly transforms into a bouncing, fuzzy black ball with iridescent blue “eyes” and “mouth” that appear to glow.

The blobfish is a foot-long pink fish found in the deep waters off the coasts of Australia and New Zealand. It has soft bones and few muscles and lacks a swim bladder, the gas-filled internal organ that allows most bony fish to control their ability to stay afloat in water.

However, that doesn’t mean that the blobfish just sinks to the ocean bottom. Instead, its body is jelly-like, with a density slightly lower than the water in which it lives. Because of that, it floats slightly above the floor of the ocean, where it waits for small crustaceans and other edible matter to pass by.