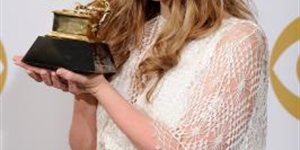 Every year since 1957, the National Academy of Recording Arts and Sciences, also known as the Recording Academy, awards the music industry’s most prestigious award, the Grammy, to a diverse cross-section of artists who have produced outstanding work in a given year. From country and R&B to jazz and classical, every genre of music is represented. A few artists stand out as having been awarded the most Grammys of all time.

Also the winner of 25 Grammys is the late pianist and composer Vladimir Horowitz. Horowitz is widely considered one of the 20th century’s greatest classical pianists. Amazingly, he won his first Grammy at the age of 60 for his 1962 album “Columbia Records Presents Vladimir Horowitz.” Between the years of 1968 and 1993, he would go on to win the majority of his 25 Grammys, including Best Classical Performance and Album of the Year. Horowitz was also posthumously awarded the Lifetime Achievement Award in 1990.

Within a breath of Quincy Jones’s total wins is composer and conductor Pierre Boulez with a total of 25 Grammys. Also in his 80s, Boulez’s work has spanned several decades. The France native has worked with numerous orchestras, including the BBC Symphony Orchestra, New York Philharmonic Orchestra, Cleveland Orchestra and Chicago Symphony Orchestra. His work with the latter two yielded Grammy wins, one for the recording of Debussy’s “La Mer” and another for “Boulez Conducts Varese.” Boulez has dominated the Classical category, with numerous Grammy wins for Best Classical Album.

The third name on our list will likely come as no surprise. Now in his 80s, legendary composer and producer Quincy Jones is right on Krauss’s heels with a total Grammy win of 27. With the gift of musical arrangement, Jones has worked with the likes of Michael Jackson, Ray Charles, Duke Ellington, Frank Sinatra and Ella Fitzgerald. His career spans more than six decades and shows no signs of slowing down. In addition to his 27 Grammys, Jones has also been awarded a Recording Academy Trustees Award and a Grammy Legend Award.

Solo artist and producer Alison Krauss holds several distinctions. With 28 Grammys under her belt, Krauss is the female artist with the most Grammy wins to date as well as the most-awarded living artist. In addition, Krauss has dominated the Country category, winning the most Grammys of any other artist in the field. Krauss’s achievements are even more remarkable considering she has only been nominated a total of 41 times thus far, which means she has won a majority of the times she has been on the ballot. At this rate, Krauss is likely to pass Solti’s 31-Grammy lead sooner rather than later and she’s still only in her 40s.

With 31 total wins, the late conductor Sir Georg Solti has the distinction of winning the most Grammy awards of any artist in any genre. Leading the Chicago Symphony Orchestra for 22 years, Solti was nominated a total of 74 times. Not only is Solti the record holder when it comes to total Grammys, he also has the most wins in the Classical category. For a time, no one else expected to win the Classical category because Solti was such a powerhouse conductor that his win was all but assumed—with good reason. Solti’s last win was in 1997. He won the Grammy for Best Opera Recording for “Wagner: Die Meistersinger Von Nurnberg.”
Must Read
Ex-Army Dog Jumps At Girl And Dad Decides To Take Him To The Vet
Man Hears Noise In Yard Sale Dresser, Finds Hidden Drawer Inside
Stepfather Asks Wife's 8-Year-Old To Pay Rent, Learns Valuable Lesson