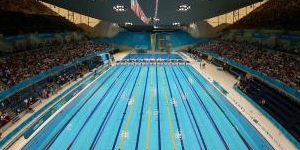 Medals make the swimmer. Although aquatic athletes covet their world championships wins, they gain fame and a place in swimming history with their Olympic medal take. Female swimmers, unlike their male counterparts, compete in and out of lanes, leading the list to include the relatively new Olympic water sport, synchronized swimming. These five stars set records beyond those measured by seconds.

Anastasia Davydova became the most decorated Olympic synchronized swimmer since the sport joined the Olympic Games in 1984. The Russian holds top place in her sport’s gold-medal count with five. Davydova won an Olympic double-double by taking gold in team and duet events in both the Athens and Beijing Games. After adding her fifth gold at the 2012 London Games, Moscow-born Davydova retired to become an ambassador for the 2014 Sochi Olympic Games. FINA—the International Swimming Federation named her the decade’s best underwater swimmer.

Yana Klochkova swam the 200-, 400- and 800-meter individual medleys and swam them well, winning four gold and one silver Olympic medals. “Swimming World Magazine” considers her to be one of the greatest female IMers in the sport, in part because she’s the only one to win what it calls an “Olympic double-double:” the same two events—200- and 400-meter medleys—at two different Games—2000 Sydney and 2004 Athens. The Ukrainian became an International Swimming Hall of Fame honoree in 2013.

Krisztina Egerszegi holds the distinction of being the youngest Olympic gold medal swimmer and the sole female swimmer to win 100- and 400-meter events in a single Olympic Games. The backstroke specialist’s owns the gold-medal streak for the 200-meter backstroke event by winning it at three consecutive Olympiads. Two world records, seven Olympic medals and induction into the International Swimming Hall of Fame in 2001 made this Hungarian athlete a Top 5 female swimmer.

Dutch sprinter Inge de Bruijn holds eight Olympic medals, including three golds she won in individual events at the 2000 Sydney Olympic Games. Her 11 world records in freestyle and butterfly 50- and 100-meter events helped earn her place in the International Swimming Hall of Fame in 2009. Like Dana Torres, De Bruijn swam against much younger competitors late in her career. The two-time World Swimmer of the Year won gold at age 31 in the 50-meter freestyle at the Athens Olympic Games.

Her Olympic run may have ended when, at age 45, she failed to make the 2012 U.S. team by a mere nine-hundredths of a second, but Dara Torres chalked up an impressive medal count throughout her 24 years as an Olympiad. The first American swimmer to compete in five Olympic Games, she joined an elite trio of athletes who won at least four medals in each color—bronze, silver and gold.