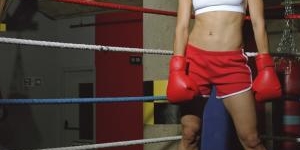 Although the first female boxing match took place in 1876, women were prohibited from boxing by most major organizations and licensing bureaus until the late 1980s. In 1988, Sweden lifted its ban on women in amateur boxing, becoming the first country to do so. The U.S. and other countries followed suit and female boxers gained global respect and recognition, culminating in the debut of women’s boxing at the 2012 Olympic Games. The relatively short history of women’s boxing has produced a few who are destined to become fighting legends.

Mia St. John began her professional boxing career in 1997, winning by a knockout 54 seconds into the first round. She combined her fighting prowess with media acumen, amassing an empire including television and commercial appearances, championship titles, a fitness DVD and even her own PlayStation game. Throughout her long professional career, St. John remained dogged by a 2002 title loss to Christy Martin—a loss she avenged in 2012 at the age of 45. After capturing the WBC super welterweight championship of the world, St. John retired from professional boxing with a 47-11-2 record including 18 KOs.

Ann Wolfe’s athletic career began on the basketball court, where she competed for the 1995 NCAA national championship at the University of Tennessee. Wolfe began boxing professionally in 1998. Her defining fight came in 2004, when she knocked out the light heavyweight champion in a blistering 68 seconds. Opponent Vonda Ward suffered a concussion as a result and spent a few days in the hospital. Wolfe retired in 2006 with an impressive 24-1 record, her only loss coming in 2000 to a fighter she turned around and beat three years later.

Known in the boxing world as “the Coal Miner’s Daughter,” Christy Martin is best remembered for her fight with Ireland’s Deirdre Gogarty in 1996. The match-up was a preliminary to the Frank Bruno-Mike Tyson title fight at the MGM Grand in Las Vegas. The brutality of the fight, which was aired on Showtime, shocked a lot of viewers who weren’t expecting such a raw and gory fight between two women. Martin’s last fight was a rematch with Mia St. John for the WBC middleweight title, which she lost in a 10-round unanimous decision. Martin retired with a 49-7-3 record that included 31 KOs.

One of the pioneers of women’s boxing, Regina Halmich began boxing in 1994 and retired in 2007 with an unmatched 54-1-1 record. The German native fought in five different weight divisions over the course of her career. Her lone loss came in 1995 in a fight for the Women’s International Boxing Federation flyweight title. One of the most financially successful women in boxing, Halmich is credited with boosting the popularity of women’s boxing in Europe. Eight million television viewers tuned in to watch her sold-out final bout, an estimated 40 percent audience share.

In 2009, Lucia Rijker became the first female to be inducted into the World Boxing Hall of Fame. Rijker began boxing professionally in 1996 and retired undefeated in 2004 with a 17-0 record that included 14 KOs. Prior to her boxing career, she amassed five world titles as a kick boxer, holding an unblemished 37-0 Muay Thai record with 25 KOs. No wonder some call her “The Most Dangerous Woman in the World.” A year after her retirement she could be seen in the Academy Award-winning film “Million Dollar Baby.” She not only appeared as a boxer in the film but also trained star Hilary Swank.