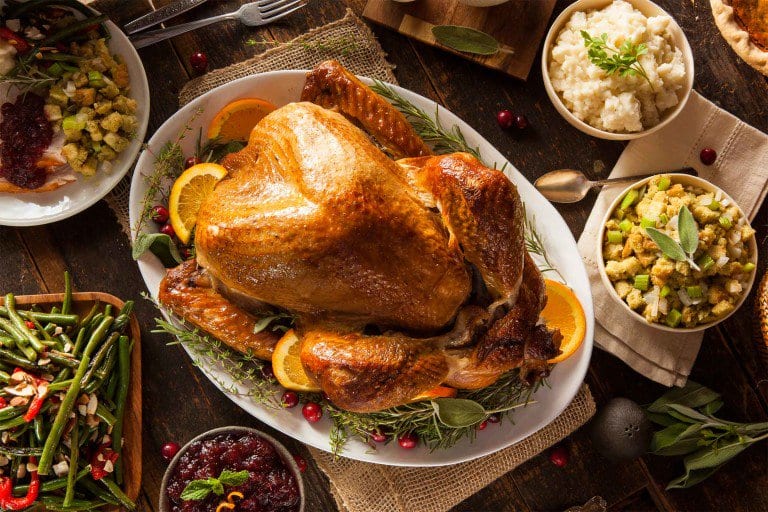 If you’re anything like us, you may have been skimming the internet for tips to land the BEST BLACK FRIDAY & CYBER MODAY OFFERS.  Now you can check out some Thanksgiving history facts that anyone could use to wow their guests or fill any awkward silence around the table!

But on this occasion, it’s also good practice to look back on the events that shaped Thanksgiving as we know it today. Who knows, you may even find out that not all presidents endorsed Thanksgiving or that a Turkey Talk-Line is available for everyone in this busy holiday season!

Thanksgiving history facts that made our jaws drop:

Thanksgiving May Not Have Started in 1621 in Plymouth

The popular belief is that the first Thanksgiving celebration happened in the autumn of 1621 in Plymouth, Massachusetts when the colonists and Wampanoag Indians shared a harvest feast.

Some historians don’t agree with this version of history though. They argue that the first Thanksgiving in America actually happened in Florida, almost 60 years before Plymouth!

According to them, the encounter happened between 800 Spanish settlers and the native Timucuan people, after the Spanish arrived at the new settlement of St. Augustine, Florida. A mass to thank God for their safe arrival was held, followed by a feast to celebrate, to which the local Timucua tribe was invited.

The Name “Thanksgiving” Came Later On

When the first Thanksgiving feasts were being held, no one actually called them by that name.

It was a small indication in the publication of a letter by Pilgrim Edward Winslow that pushed this name forward. Sent to the Boston publisher Alexander Youn in 1841, the letter contained a description of the feast, where the pilgrim stated: “Our harvest being gotten in, our governor sent four men on fowling, that so we might after a more special manner rejoice together.”

When Young published the letter, he included the name “Thanksgiving” in a footnote, even though the pilgrim never used it, but the name became widely used since then.

We Could Have Been Eating Venison Instead Of Turkey

This one can be hard to believe, so brace yourselves: there is no record that turkey was 0n the menu at the first Thanksgiving meal.

If we were to be eating the food that was brought to that feast, we would be eating venison—offered by the Wampanoag tribe on that day— and local seafood including lobster (fancy!), mussels, and bass. How about the beloved mashed potatoes? Absolutely not! However, pumpkin was on the menu, in addition to other fruits and vegetables from the first pilgrim harvest.

Sarah Josepha Hale Is The Mother of Thanksgiving

Does the name ring a bell? Sarah Josepha Hale was the editor of the famous Godey’s Lady’s Book, and if there is anyone to thank for the holiday, it should be her.

In the mid-19th century, she campaigned hard for a national Thanksgiving Day to promote unity amongst different sections. Abraham Lincoln listened to her plea and supported her idea. This is how he proclaimed, during the Civil War, that Thursday, November 26th will become a national day of Thanksgiving.

The following presidents kept on proclaiming the holiday, although on different dates. If you’re wondering who set out the day once and for all, keep on reading!

Thanksgiving Was Cancelled Due to No Pumpkin Pie

With hundreds of pumpkin pie recipes made available online, one might wonder just *how* important it is on a Thanksgiving table.

While pumpkin pie has been a fundamental treat on New England Thanksgiving tables since the 18th century, residents of Colchester, Connecticut proved that they didn’t joke about their Thanksgiving essentials.

Due to a molasses shortage in 1705, residents of Colchester, Connecticut delayed Thanksgiving for a week! Talk about commitment.

READ MORE: The Most Beautiful Thanksgiving Pies with Recipes

What’s The Deal With Cranberries?

To add to the list of items that weren’t actually on the menu of the first Thanksgiving is sweetened cranberries.

It is true that cranberries were eaten by Native Americans but they weren’t sweetened. The Pilgrims didn’t eat the sweet relish either since they exhausted their sugar supply by 1621.

Bonus info: The first jellied cranberry sauce was canned by Marcus Urann in 1912.

Are you one of the many Americans who tunes in to watch football on Thanksgiving? If yes, then you’re carrying on a tradition that started almost one and a half centuries ago!

It all started with a college match between Princeton and Yale, recorded as the first Thanksgiving football game, in 1876. The next years, the tradition spread to many high schools and colleges where games were played on Thanksgiving.

Thomas Jefferson Was Not Very Thankful

Not everyone was on board of recognizing government proclamations of Thanksgiving, and there was one person who was unapologetically against it: Founding Father and then-President, Thomas Jefferson.

But let us get our Thanksgiving history facts straight. First of all, Jefferson didn’t cancel Thanksgiving, it wasn’t an official holiday then. Second, he didn’t abolish its celebration. The only aspect he opposed was its government proclamations. Indeed, he strongly believed in the strong separation of state and church, which could be compromised by officially endorsing a religious celebration.

No one can deny the economic boost the country knows on this holiday season. But before multi-million profit-making Black Friday sales and Cyber Monday deals, the holiday shopping season was comprised of Thanksgiving and Christmas only.

With that thought in mind, and concerned that a late Thanksgiving would shorten the Christmas shopping season and dampen the economy, President Franklin D. Roosevelt decided to issue a Presidential Proclamation to move Thanksgiving one week earlier.

Did that work though? Not really. As many states didn’t comply in that year of 1939, he was obliged to issue another proclamation in 1942 to choose the fourth Thursday of November as Thanksgiving Day.


Who Was The President Who Officially Pardoned a Turkey First?

If turkeys could talk, they would probably tell us their dream career is to become a White House Thanksgiving Turkey! But when did this tradition start?

According to the Obama White House website, tracking down when the very first president to pardon a turkey happened is quite tricky. However, there are tales that it all started with Abraham Lincoln. His son Tad begged him to pardon the turkey that was destined to be on their family’s table. Arguing that the bird had the right to live, as much as anyone, Lincoln granted his wish.

In 1963, President Kennedy also spared the life of the bird he received, saying: “We’ll just let this one grow.”

However, it was President George H.W. Bush who was the first to officially pardon a turkey, in 1989, announcing: “[The turkey] had been granted a presidential pardon as of right now.”

But for the record, two turkeys are sent to the White House, one pardoned and one for the feast.

Benjamin Franklin Prefers The Turkey Over The Bald Eagle

The turkey? A national symbol? Yes, that’s what Benjamin Franklin wished for.

In a letter to his daughter, he wrote: “For my own part I wish the Bald Eagle had not been chosen the Representative of our Country… For the Truth, the Turkey is in Comparison a much more respectable Bird.”

First Macy’s Thanksgiving Parade: Had Live Animals Instead of Balloons

Yes, you read that right. Major Thanksgiving history facts that will blow your family’s mind when you’re watching the parade on TV.

Let us explain. Macy’s wanted to celebrate the expansion of its Herald Square superstore and decided to throw the “Big Christmas Parade” in 1924, two weeks before Thanksgiving. The twist? It didn’t have any balloons but instead showed live animals from the Central Park Zoo, bands, and magnificent floats.

The first balloon introduced was ‘Felix the Cat’ in 1927.

Can you remember the biggest mistake you made as an intern or an employee? No matter whom you offended or which project you forgot to turn in, there is a big chance it won’t come close to what an employee of C.A. Swanson & Sons did in 1953.

He overestimated demand for Thanksgiving turkey and the company found itself with 260 tons of extra frozen food.

According to Smithsonian reports, after the panic moment, a genius Swanson salesman came in with a brilliant idea: instead of wasting the food, the company would package it alongside some vegetables and sell it in aluminum trays, that will be easy for people to buy and reheat.

“Jingle Bells” Should Have Been a Thanksgiving Song

No way, you’re saying. It’s hard to believe, we know. But the “Jingle Bells” song—that was originally titled “One Horse Open Sleigh,”—by the way—was originally composed by Jame Pierpont in 1875 for Thanksgiving.

The song gained such popularity on Christmas that it changed to the version we know and love today.

There are four cities in the USA named Turkey.  They are Turkey Creek, AZ; Turkey Tx, Turkey Creek, LA; and Turkey NC.  There are no towns named Thanksgiving.

There are some other tasty Thanksgiving related cities.  A few of our favorites are Cranberry, PA; Pie Town, NM and Yum Yum, TN.

Loosen that belt and get your grub on.  The average American will eat roughly 3,000 calories on Thanksgiving — for dinner alone. Drinks, dessert and appetizers can bring the total calorie count to 4,500, according to the Calorie Control Council, an industry group.

A healthy average man and woman eats about 2000 calories a day.  The Thanksgiving meal is a good two days worth of eating at one sitting and it will take an adult over ten hours to burn all those calories.  I guess that is why Thanksgiving is limited to one day a year.

46 Million Turkeys Are Killed for Thanksgiving Each Year

An estimated 46 million turkeys are killed each year for Thanksgiving alone.  Often these turkeys are genetically manipulated to grow faster than a normal wild turkey.  They do this in order to get to the right weight to be sold.

Turkeys are mostly grown in Minnesota, North Carolina and Arkansas.  The revenue generated from the Thanksgiving turkey sales is at $6.18 billion in 2016, according to the National Agriculture Statistics Service.

Butterball has had a Turkey Talk-Line open since 1981.  For more than 30 years, the professionally trained turkey experts answer turkey related questions each holiday season.

Open every November and December, Butterball’s 50+ experts answer more than 100,000 questions, for thousands of households around the United States and Canada.

What do you think of these Thanksgiving history facts? Got anyone we can add to the list? Let us know in the comments! And for more history-related mind-blowing facts, make sure to read the next article!