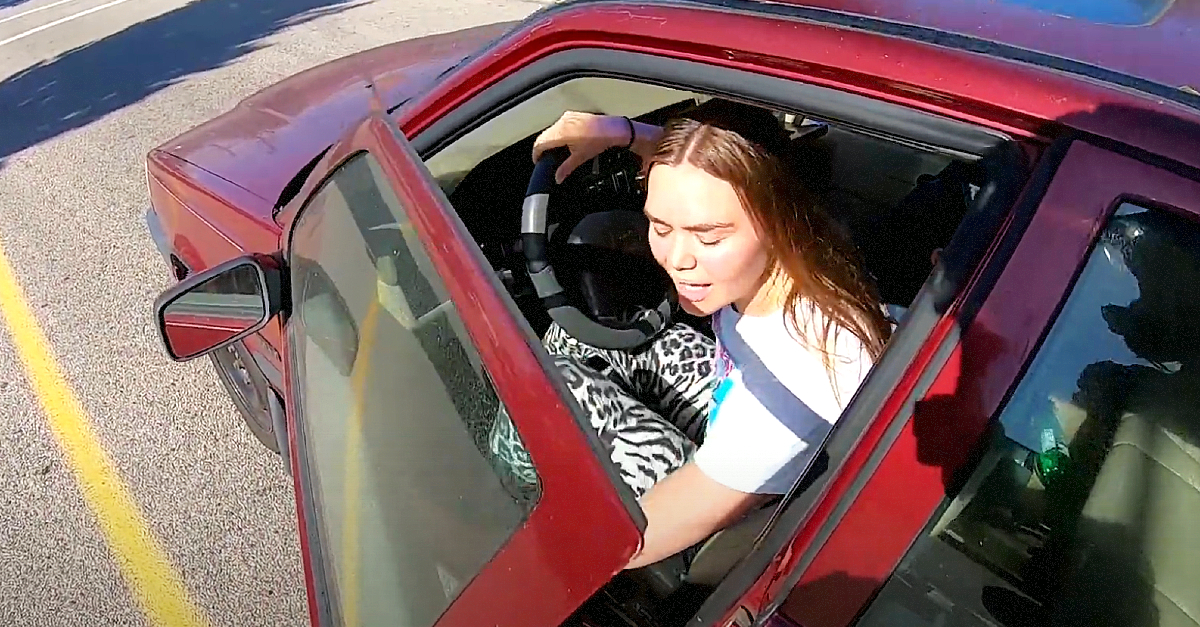 The ringing in her head still hadn’t stopped.

A burnt stench lingered in her nose and mixed with the sour taste of panic. This was the last thing she needed. But, as if things couldn’t get any worse, a vehicle pulled up beside her and rolled down the window. The smile felt all wrong, and her stomach twisted into painful knots.

So far it had been a crazy morning rush.

Tina Jacob’s 5-year-old son, Kenneth, was already late for swimming practice and the grocery list was looking longer and more expensive than expected. On top of it all, her 2-year-old, Mary, was screaming and crying over her new socks that felt “funny.”

Tina was a single mom which meant she was the only one in charge of getting the kids from A to B and taking care of all the household errands.

She more or less worked two jobs and felt all over the place, even at the best of times. But today was already off to a bad start. And it was about to get far worse.

No Respite In Sight

The madness seemed to spill over into the afternoon, and she already felt like curling up into a little ball and sobbing.

The dry cleaners had lost one of the shirts from her order, and her job still hadn’t paid her. The string of bad luck came to a peak when she turned a sharp corner, and a loud bang made her head ring and world spin.

She looked wildly around, looking for the source of the threatening noise. Suddenly, she felt a weird vibration course through her. It felt as though she was driving over a pit of stones.

When things finally settled, she could smell the distinct scent of burning rubber. The unpleasant smell tingled her nostrils causing her to scrunch up her face. What just happened?

Tina put on her indicators to pull over. As she brought the car to a definite halt, a heavy feeling came over her. She braced herself for what would surely come.

Tina poked her head out the window and let out a long, defeated groan. She had blown a tire. It was like a bit of icky confetti had been scattered over the road. But that wasn’t her only problem.

No Money For Help

Tina raced through her options in her mind. Calling for roadside assistance cost money – and her job was being tardy with her salary. It was out of the question. She’d have to try to fix this herself.

She threw her head back and sighed before she hopped out of the car and headed towards the trunk. She was in the middle of nowhere. But someone was watching her.

Tina opened the trunk, lifted the liner, and stared at the spare tire with a deep frown. In theory, it should have been easy to fix. But the rust on the bolts said otherwise. Anxiety built up in her chest. How was she going to do this?

Suddenly a loud honk made her jump out of her skin.

TIna looked up to see someone had pulled in beside her.

She stared at the scruffy man behind the wheel. He flashed a toothy grin and offered to help her out. On the outside, she smiled and politely declined – saying she had it under control. However, on the inside, something screamed that something was off… very off.

Maybe it was just a general sense of caution most women developed, but the last thing she wanted was for him to get too close.

He didn’t accept her rejection and offered to help her again. Tina smiled and assured him that she got it. He stared at her. No doubt wondering if she was actually capable of changing the tire herself. To Tina, each second felt like an hour. Then, an abrupt noise.

It was her cell phone. She answered it and talked confidently as if it was a friend asking her where she was but it was a teleprompter. Still, it was enough to drive the unwanted help away.

He drove off, shouting horrible names at her as he left. Tina hung up the call and looked around. It was a close call but what could she do now. She already saw another car hot on her tail.

Her car stuck out like a sore thumb on the long dirt road surrounded by fields. She truly looked like a damsel in distress – and let’s face it, she was!

If she saw a car like this, she would probably pull over too. Just like the large, blue pickup truck that soon parked behind her. Freaked from the previous encounter, Tina pulled out her phone and braced herself.

This man got right out of his car. He was tall, dark and handsome. He towered over her and looked like he worked out. The fear grew in the pit of her stomach and twisted it hard.

She got her camera ready and pressed the record button – you couldn’t be too careful these days. The man had a sweet southern accent. But he didn’t ask her if she needed help, instead, he insisted.

Man On A Mission

The Sadsti Center For Aesthetic Dentistry

This man wasn’t like the first. His smile was warm and he seemed genuine. He offered to change the tire and dove straight in. Tina couldn’t really say no. He was a man on a mission.

He wore dirty jeans and a shirt. He drove a nice car and he made light work of the tire. It wasn’t long until the bolts were flying off like they were nothing.

Done In No Time

“How’d you get them off so easy?” she asked.

The man chuckled and said, “Strong hands come with the job,” he answered. She tried to offer him a bit of money to say thank you. But he declined. They talked for a while while he put the new tire on. Then she noticed something peculiar.

She had seen his shoes before. She spotted them in a boutique window a while back. Her brow furrowed as she recalled why she remembered them. They were expensive. Like, very expensive.

She looked at the handsome man sideways and wondered what he did. She felt it was too impolite to ask so she said nothing. Instead, he wished her a nice day, and then drove away. However, that wouldn’t be the end of their chance meeting.

Part of her still felt bad she wasn’t able to give a better thank you.

So, she uploaded a picture with a simple note saying how much these acts of kindness meant. Her day had been terrible, but he made it a little better. The next day, she saw a note in the comment section that made her fall to the floor.

Luke Bryan is currently one of the biggest country stars today. It was also no coincidence that he had been in the area just when her accident occurred.

It turns out that he owned property in the area! Tina broke down in a small suburban town in Tennessee. The home of country music where a lot of big stars, like Luke Bryan, choose to live.

Luke Bryan is best known for his songs ‘What Makes You Country’, ‘Most People Are Good’ and ‘One Margarita’. For over a decade, he has remained one of the most successful and awarded country music artists – no wonder he didn’t accept Tina’s money. But online, people had more to say.

Tina watched as a stream of comments poured in. Her heart pounded at the excitement of it all. Her post was getting more and more likes and engagements.

From the rest of the comments, it seemed like acts of kindness wasn’t odd behavior for the country star. He was known to take time out of his busy lifestyle to help others. Tina watched in amazement as the story went viral.

Tina watched gobsmacked as her small social media post of gratitude travelled its way through nearly every news and radio channel in America.

Her lucky encounter spread across social media like wildfire. She was delighted that the kind man who she now knew to be Luke Bryan was getting the attention he deserved for helping her out.

Even the mayor of Columbia Chaz Molder tweeted to Bryan about his generosity.

“To show our appreciation, we would like to honor you by presenting you with a key to the city and having you serve as the Grand Marshall of the @ColumbiaTNUSA Christmas Parade alongside Santa. You in?”. But it was only a matter of time before her post reached him.

Tina was already the envy of half the nation. There were many people who would have done anything to have Luke Bryan fix their car yet Luke Bryan wasn’t quite done giving his attention to Tina.

When Tina’s post finally reached him, he commented underneath, conversing with her one last time. He said “It was my pleasure Tina. You have a beautiful family. I wish you all the best”.

Red In The Cheeks

Part of her felt foolish for not recognizing such a famous person.

However, on the other hand he probably liked to be treated as any other normal person. But, more than anything, she had got her message of gratitude out – and that’s what mattered most. Tina also knew one more thing.

She was going to pay it forward.

So often people get wrapped up in the stress of their lives that they forget about others. The next time she saw someone struggling, she was going to reach out and help them.