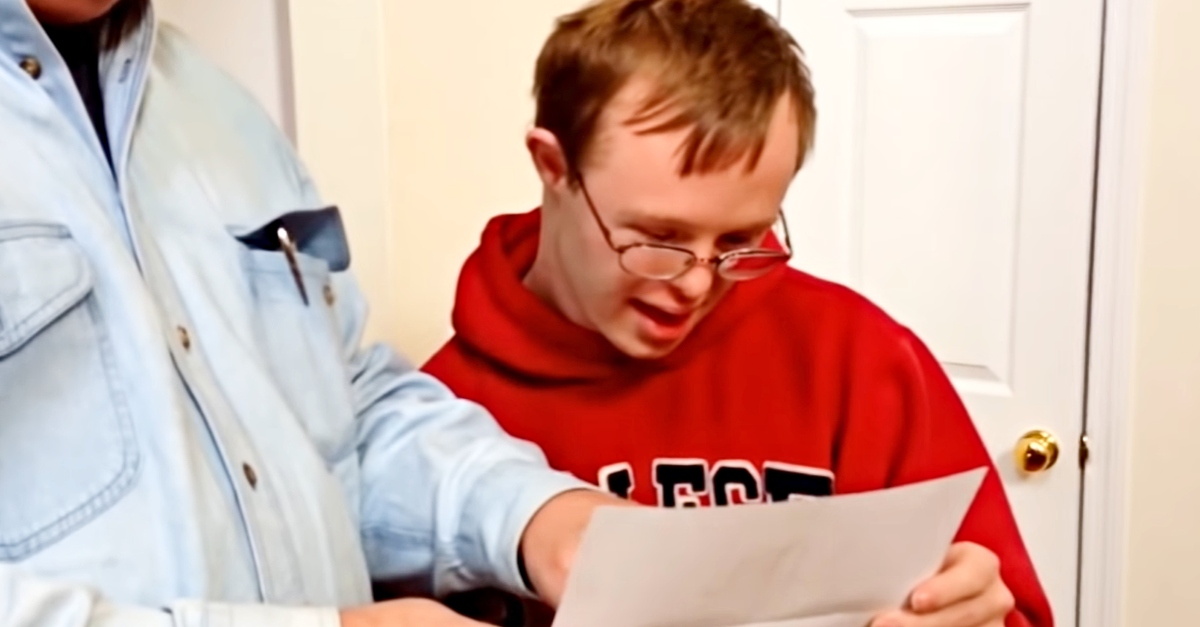 The whole world watched as Rion Holcombe read the letter that changed everything. Through the screen, his contagious excitement and bright smile could be seen.

However, there was more to it. It was the culmination of Rion’s journey to break down barriers and vindicate himself against all doubters. His letter silenced all the haters, and it was his time to shine.

Rion’s mother knew that he was destined to live a good life. It was apparent that he had a light that was unlike much of the world, and she saw it even though he had obvious obstacles.

A child’s upbringing in the world could not be easy. Rion and other children with exceptional needs, who had to navigate life despite numerous obstacles, had a harder time.

Rion has Down syndrome. Even though it is fairly common (in the U.S., about one in 700 children are diagnosed with it each year), many antiquated beliefs still persist.

Unfortunately, more information is needed to dispel false assumptions about the illness, which makes it more difficult for kids with Down syndrome to receive the respect they merit.

Many parents of children with Down syndrome lament their children’s early experiences with teachers and other staff members. It appears that beliefs occasionally need to be changed, even among adults.

These preconceived notions are still prevalent today, sadly. It was well known to Rion’s family that he was not a slow learner.

This was not evident to everyone, however. In his formative years, he was subject to doubt, whether it was through prejudice or a simple lack of knowledge.

The school psychologist had to evaluate Rion when he was only five years old. The results of her research were discussed with his parents. Since they knew Rion was capable, positive news was expected.

Instead, they received an assessment that left them feeling incredibly disappointed. The psychologist’s comments were really worrisome.

A sliding scale of intellectual development was used to assess Rion, as per his former school psychologist. This made her opinion of him quite unsettling.

The assessment’s ramifications were unpleasant to think about. In essence, it suggested that Rion’s cerebral development was anticipated to “plateau” around the age of 13.

Rion’s narrative has prompted an important conversation about how underappreciated these children are. Similar accounts were shared by numerous other parents who shared their experiences.

It seems that many children, like Rion, are expected to “struggle cognitively” and face difficulty. In some severe instances, parents received obscene counsel.

Doctors, educators, and counselors have warned some parents that raising children with Down syndrome can be extremely taxing on the family. Sadly, their advise to stay away from it demonstrates how little awareness and empathy society has for the condition.

It is advised that parents with kids who have Down syndrome consider institutionalizing them. In Rion’s case, parents saw his ability as equal to any other child and refused to contemplate such alternatives.

It is regrettable that many ethnic communities still exhibit the prejudice that once pervaded society. Children who have physical or mental problems are frequently viewed as inconveniences or embarrassments and are compelled to live their whole lives in facilities.

Rion’s family found the psychologist’s evaluation of him puzzling. As the years passed, they struggled to square Rion’s behavior at home with the prognosis. It became quickly clear that he was truly quite accomplished.

Rion’s intellectual and behavioral development continued to improve throughout his life. By the time he was 19 years old, he harbored similar ambitions to any teenager his age.

The problem was that society, internet trolls, and even so-called professionals had never given him a fair chance. However, this extraordinary young man was about to prove them all wrong when he received a much-anticipated letter.

When Rion opened the letter and read its contents, his family had the foresight to record the moment. It was later shared on TikTok and quickly went viral for Rion’s heartwarming reaction and huge, beaming smile when he got the news.

So what made it all so amazing? Far from intellectually plateauing at the age of 13 like his psychologist had predicted, the fateful letter confirmed that Rion Holcombe had been accepted to college.

Rion’s video was well-received by the overwhelming majority of people who viewed, liked, and shared it. However, the comments that came after exposed many ignorant views that still existed in society.

Aside from being shocked that a child with Down syndrome was intellectually capable of making it to college, many people were also stunned to discover that such colleges even existed.

Thankfully, far from the disturbing past when people with mental disabilities were hidden away and institutionalized, the world now offers many opportunities for them to live regular lives.

In fact, many people may be surprised to learn the truth. Hundreds of colleges and higher learning institutions are available to kids with Down syndrome, autism, and many other conditions that affect developmental and intellectual ability.

Rion Holcombe completed a two-year “LIFE Program” at Clemson University in South Carolina. He now works two jobs that allow him to pay all his own expenses and live a far better quality of life than people might assume.

He also has a girlfriend with Down syndrome, and the couple regularly goes on dates together. Rion thus stands as a beacon and an inspiration to many. His story proves that archaic notions that seek to preclude special needs persons from society have no place anymore.