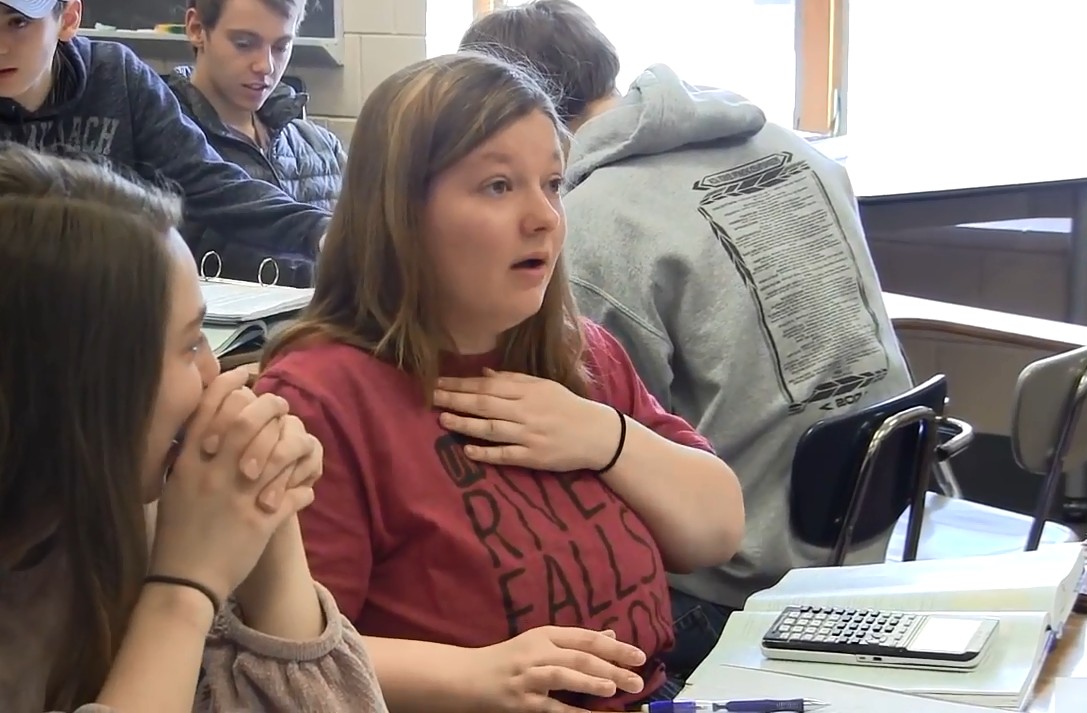 Not Just Another Day

She was daydreaming, barely conscious of the teacher’s voice when the intercom suddenly flicked on. After a second of static, a smooth voice that definitely didn’t belong to the principal began to speak through the loudspeaker. “Let’s start this Friday morning announcement off with a little bit of fun…” The students looked around frantically, unsure of what was happening.

Then, Katie heard her name. 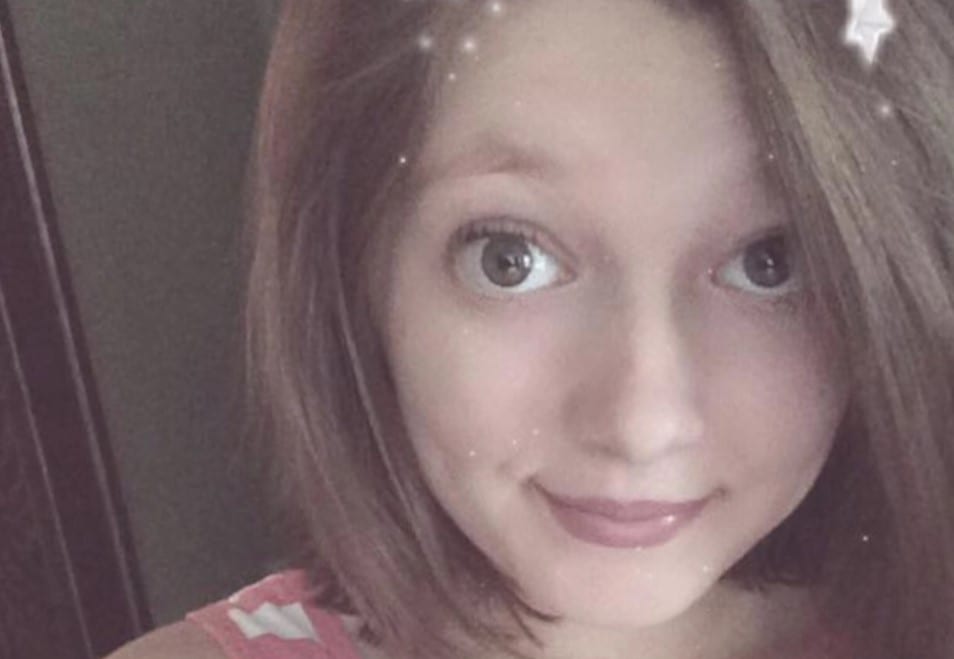 Katie Kelzenberg, Minnesota resident and senior at Stillwater Area High School, was trying to put on a brave face. After being rejected by the boy she had mustered up the courage to ask to prom, she found herself wondering if she would be going at all.

It seemed like the end of the world. But then, she had an idea. 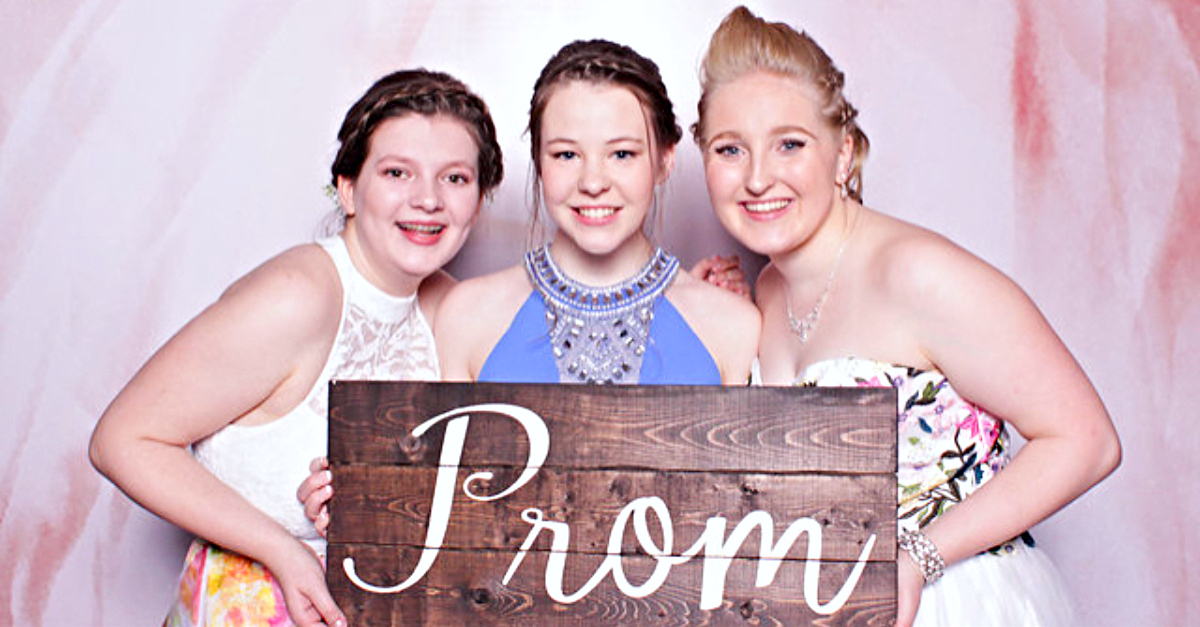 With senior prom just around the corner, all the other students in her class had already paired up. It was then that she decided to do something that few would be brave enough to do. The stakes were high. If she failed, she risked looking like a fool.

Then, Katie realized that she had nothing left to lose. 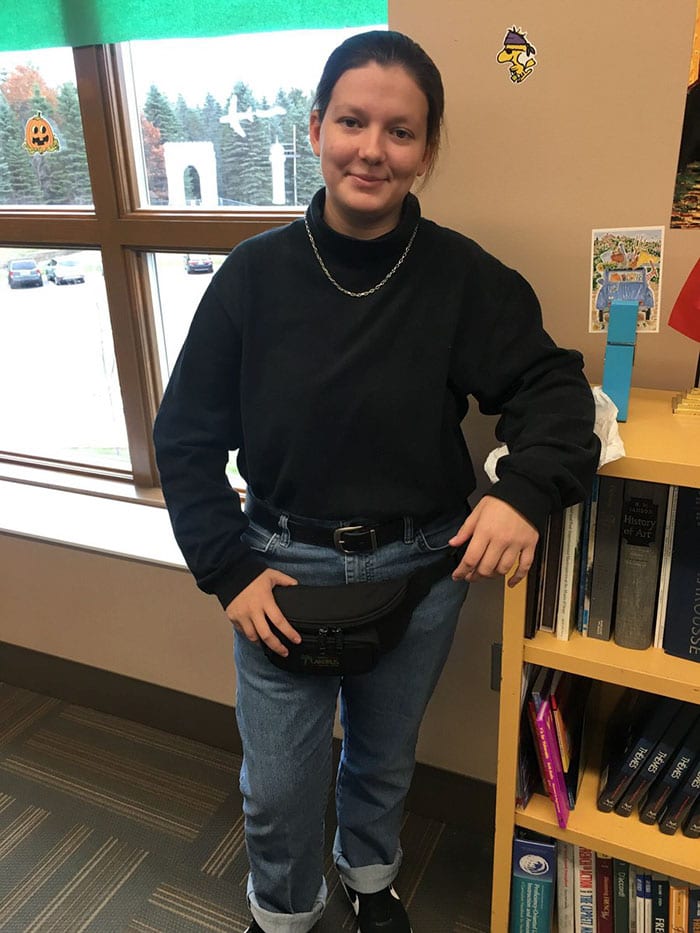 Everyone in her class knew that Katie was a little obsessed. While other girls her age stuck Justin Bieber posters inside their lockers, Katie was re-watching the action blockbuster Skyscraper. While her peers dressed as the usual characters for Halloween, Katie painstakingly recreated her favorite male star’s iconic 80s look.

Katie was a Dwayne “The Rock” Johnson superfan. 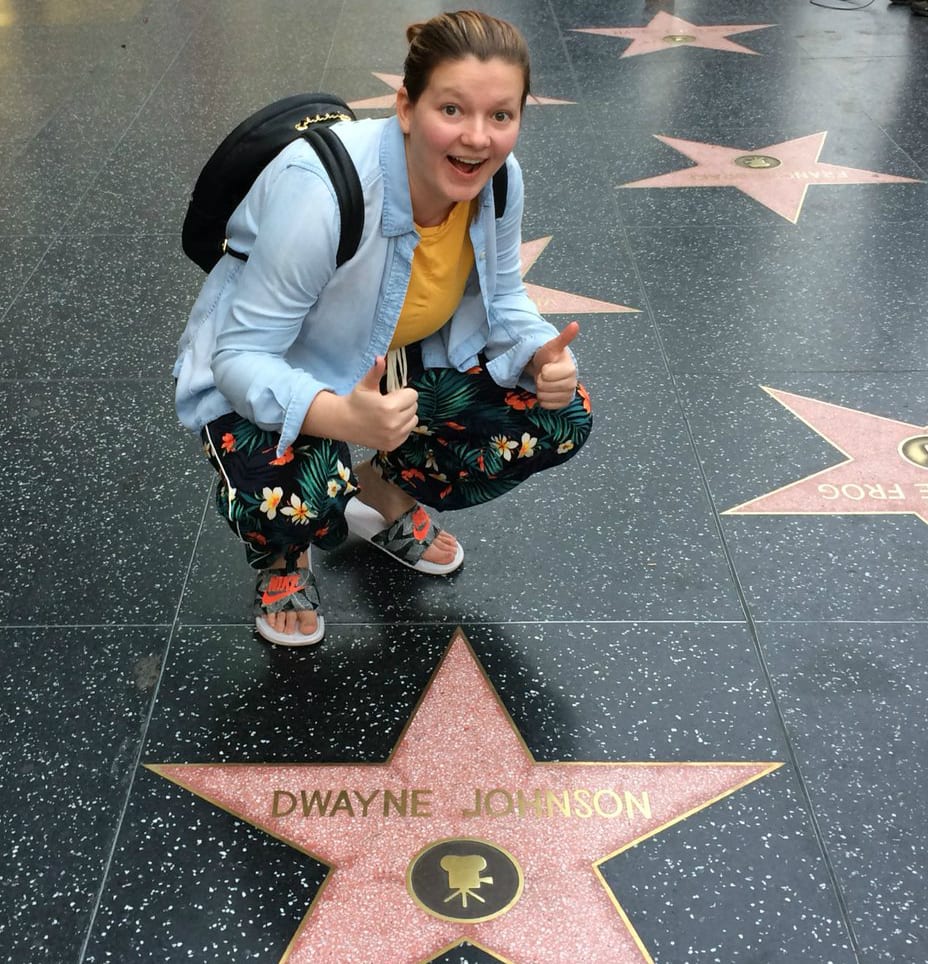 If Katie couldn’t go to prom with someone at her school, she figured that she might as well ask the person she would most like to go with. The only question was: how?

She knew she needed to go big, or go home. But she was just one of his millions of fans. How could she get the superstar’s attention? 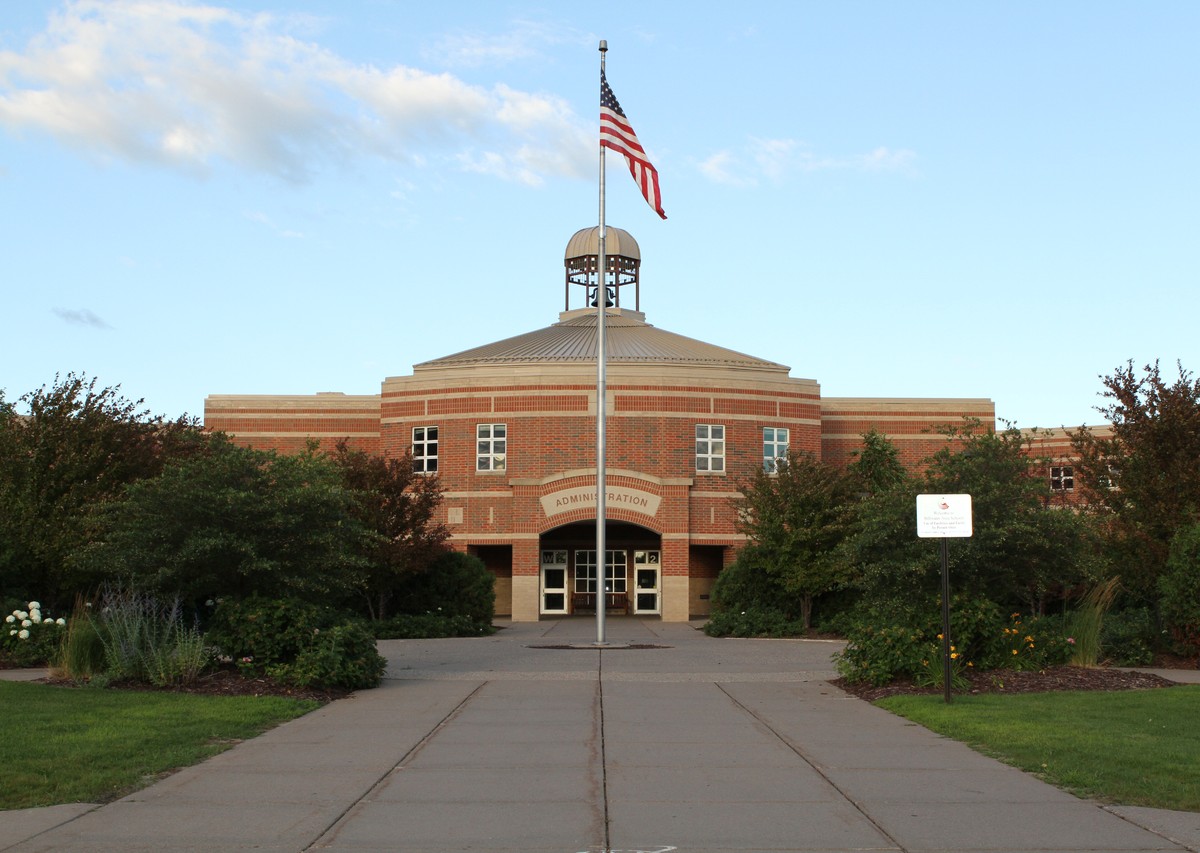 Katie decided to post a video online. She made a giant sign, donned her blue jeans, a black sweater, a moon bag, and silver chain. Then, she got down on her knees and hit record. After she had sent the video out into the world, all she could do was wait.

But was it enough for The Rock himself to take notice? 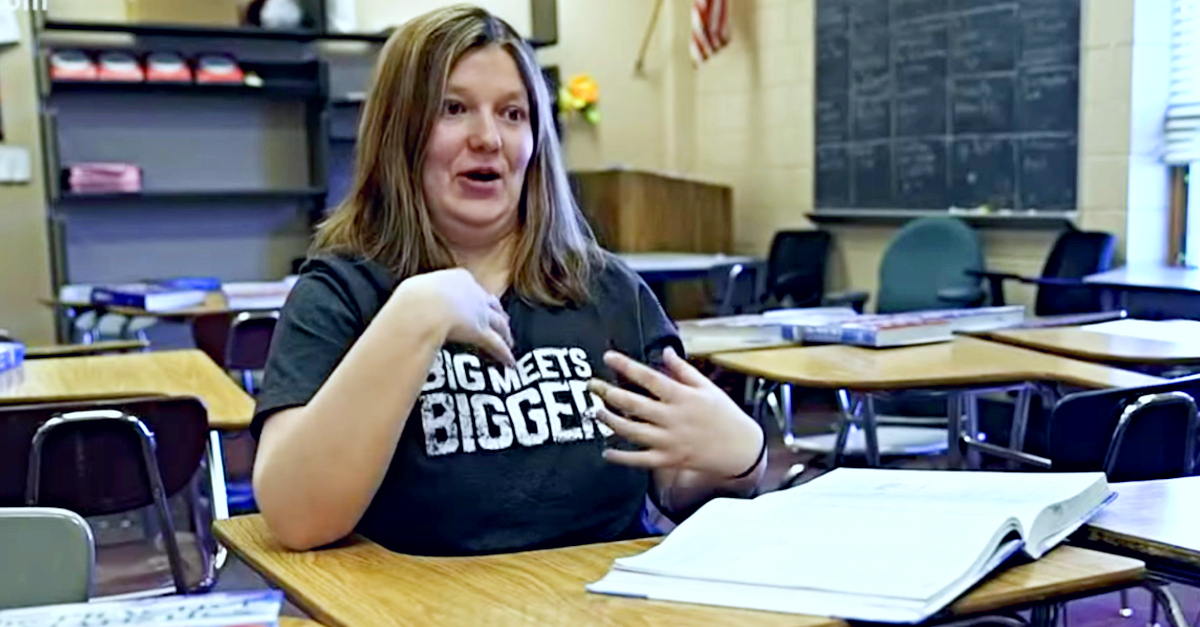 To Katie’s surprise, her post was retweeted on Twitter over 3,000 times. Her video was quickly going viral. One commenter wrote: “Hey, you took a shot. Good for you. Someone will be honored to take you. Have a great time!”

Followers waited with bated breath to see if Dwayne Johnson would respond to his biggest fan’s gutsy promposal, but nobody really had any expectations. 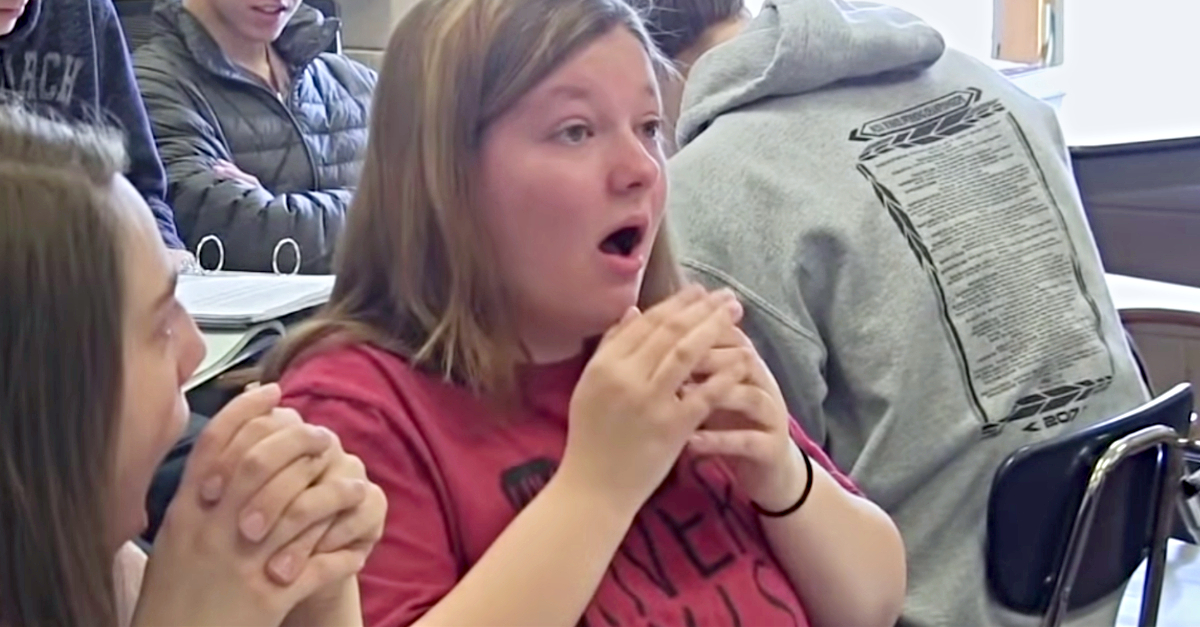 Days went by with still no reply from the action star. Nevertheless, Katie was glad that she had put herself out there. It took some moxie to ask such a famous celebrity to prom! It had been worth a shot.

After a long week of lessons, it was finally Friday. Then, something happened that rocked Katie’s world. 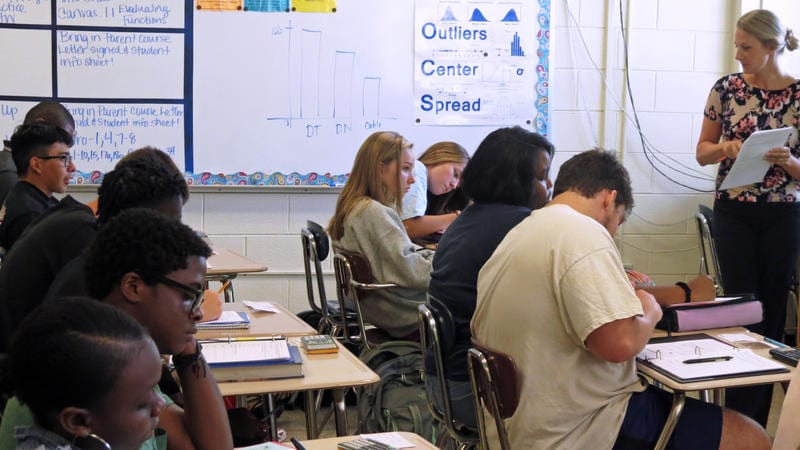 Katie was summoning up all her concentration to pay attention in statistics class. Her head filled with graphs and averages, but she was still daydreaming.

She wondered if Dwayne Johnson had even seen her video. She knew he probably had a full schedule and was probably shooting for his new film, Jungle Cruise. Then, the intercom flicked on and she found herself listening to a familiar voice. 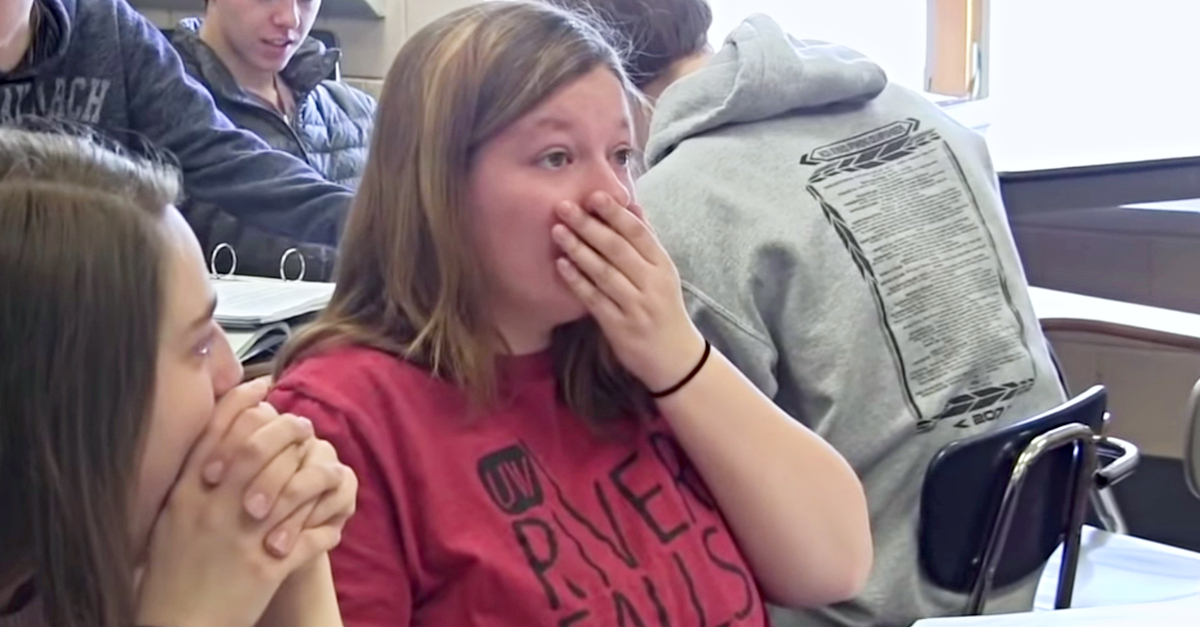 “Alright. Let’s start this Friday morning announcement off with a little bit of fun and a little bit of excitement,” the confident voice over the intercom said. “Good morning to the Stillwater Area high school students.”

Katie knew that voice. She knew it so well. She just couldn’t believe it. Her mouth opened and her eyes widened in disbelief. Could it really be? 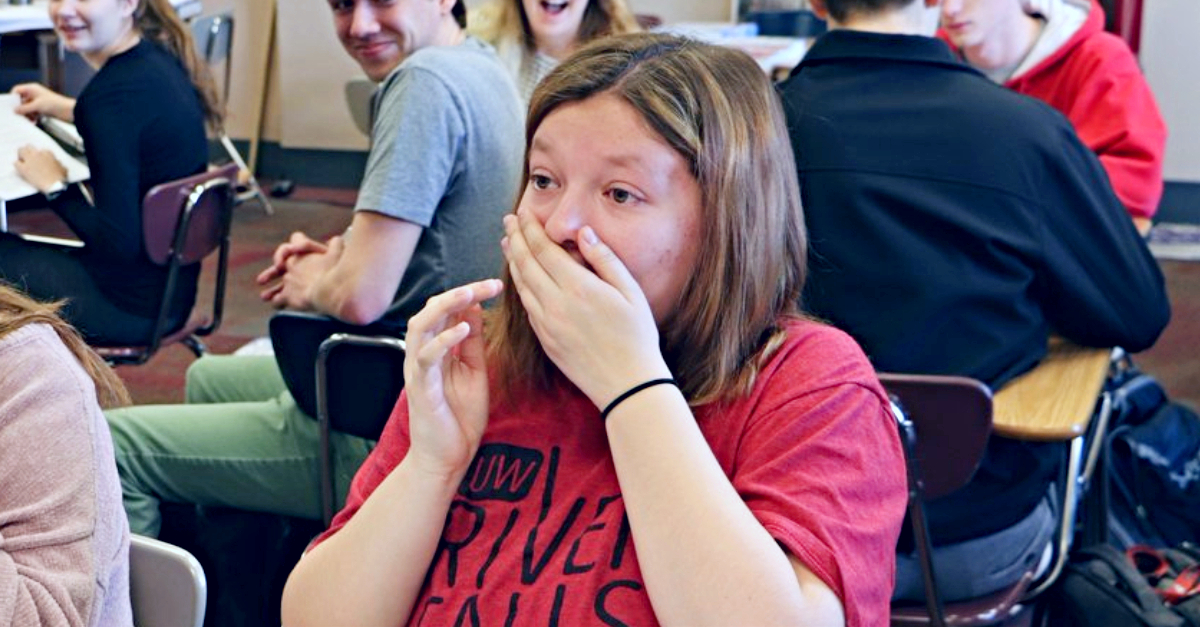 “This is, as you might have guessed by now, Dwayne Johnson,” the voice continued. Katie’s friend looked over to her and said: “No!”

Katie held her hands over her mouth as she continued to listen, hardly believing it. But what did Katie say in her video that had warranted an appearance from The Rock himself? And was he actually accepting her promposal?

A Message Just For Her 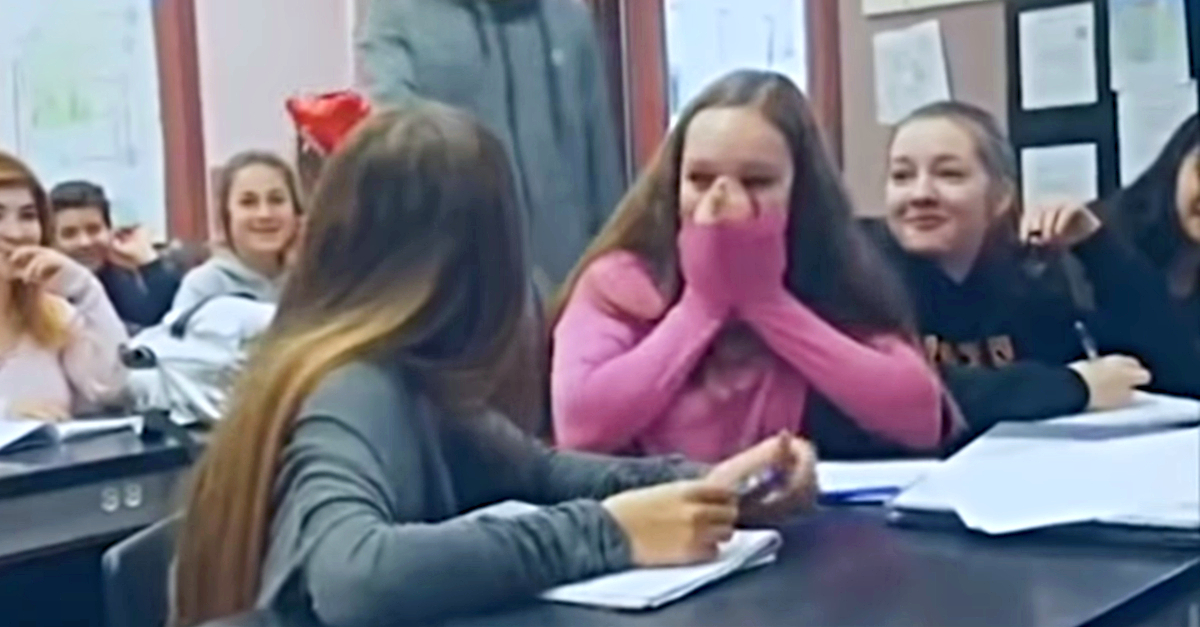 Katie’s world seemed to stand still. She sat motionless with her hands over her mouth as her ultimate idol addressed her directly. He thanked her for her invite but declined politely as he would be in Hawaii on the night of the prom, shooting his new movie.

But, he had arranged another surprise for her. 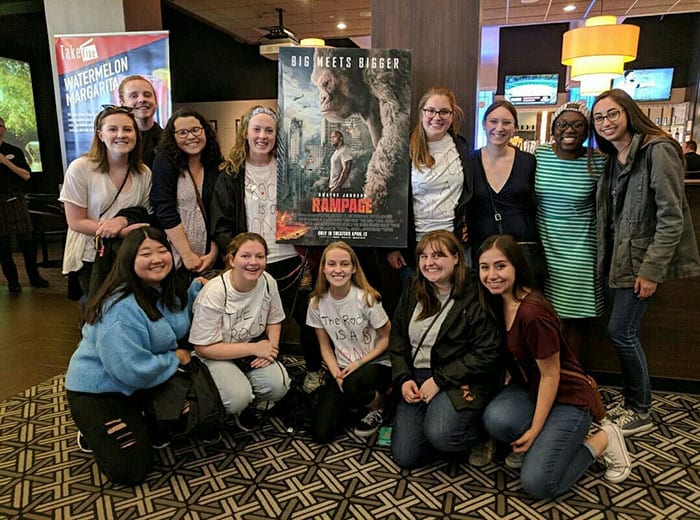 “However, Katie… because we are now best friends, and because I have so much love for you,” The Rock continued, “… as a very special gift I have rented out a theatre tomorrow… And I’m showing you a screening of my new movie, Rampage. I rented out 232 seats!”

He even added that the popcorn and drinks were on him. 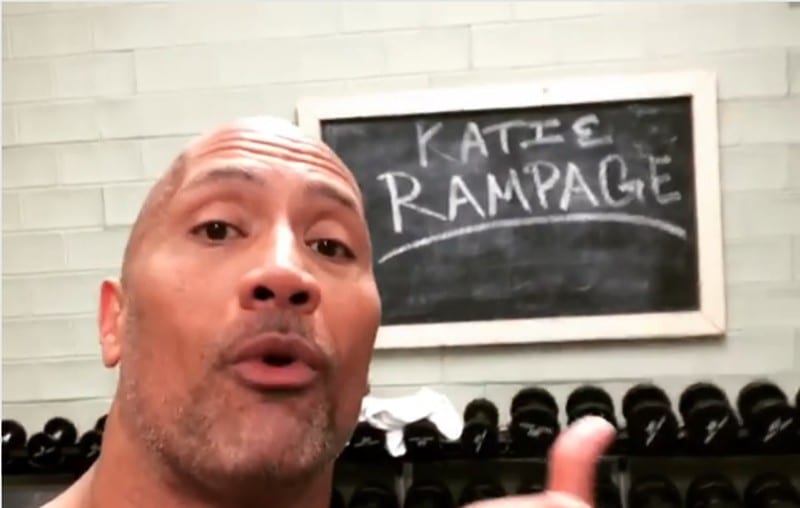 “I just can’t, like, really believe that it’s happening, because not in my wildest dreams could I imagine this happening, but here I am,” Katie said later in an interview.

And when it was finally time for her big prom night, Katie decided that she didn’t need to go with a boy after all.

Time Of Her Life 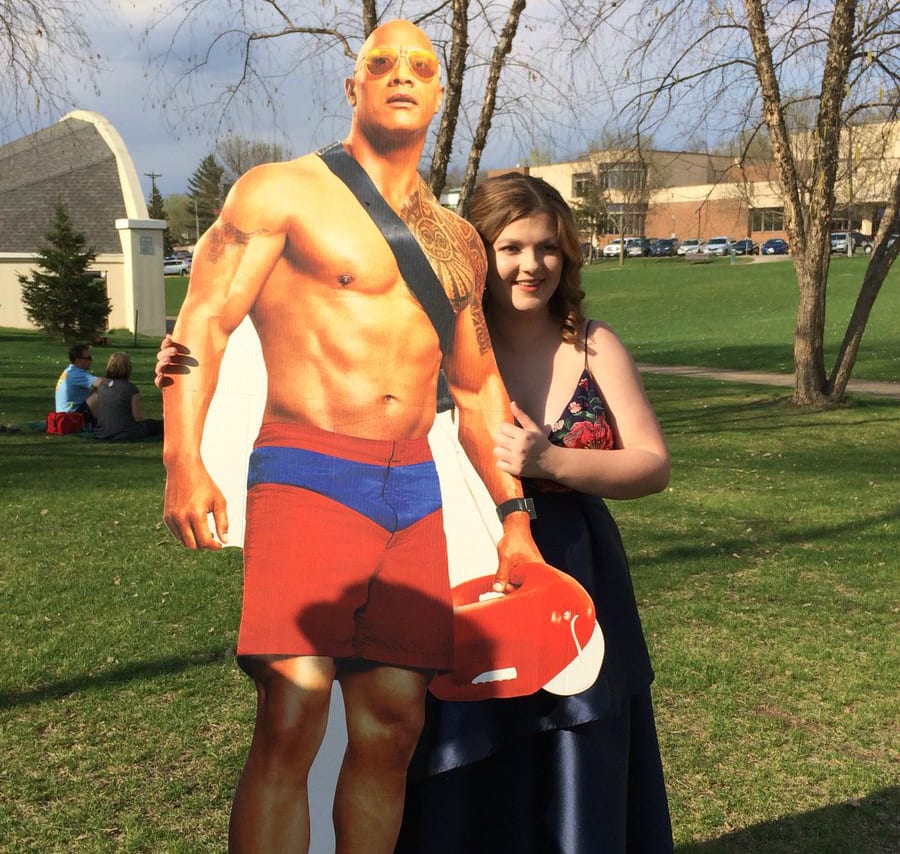 Katie attended prom with her close girlfriends by her side and had an amazing night. She was still floating from Dwayne Johnson’s special words and nothing could dampen her spirits.

She posed for photos on the big night with a life-sized cardboard cutout of her idol and had the time of her life. So, just what had she said to him in her video that he’d found so charming? 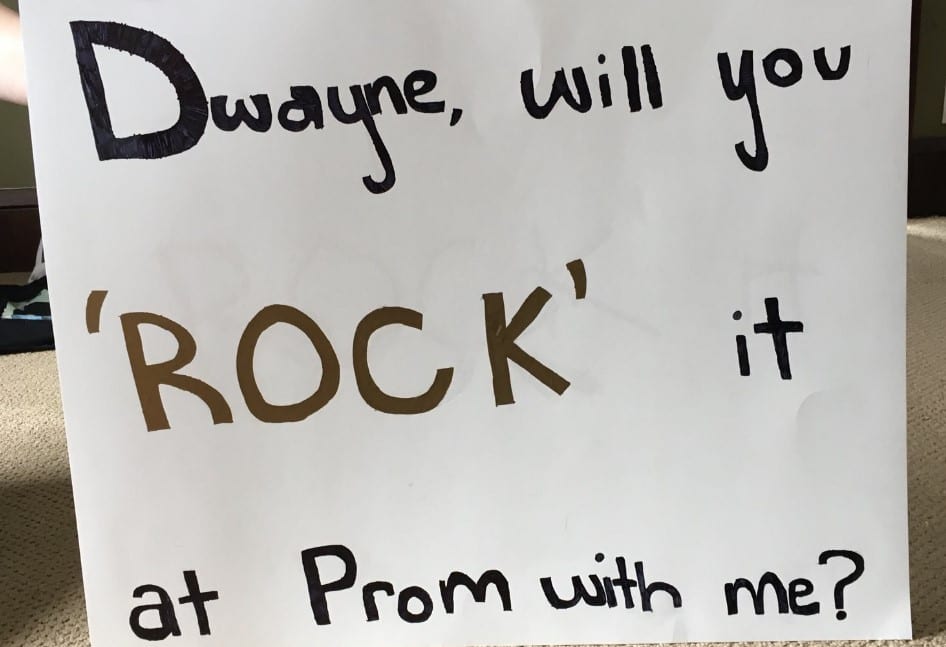 “So, Dwayne… will you rock it at prom with me?” 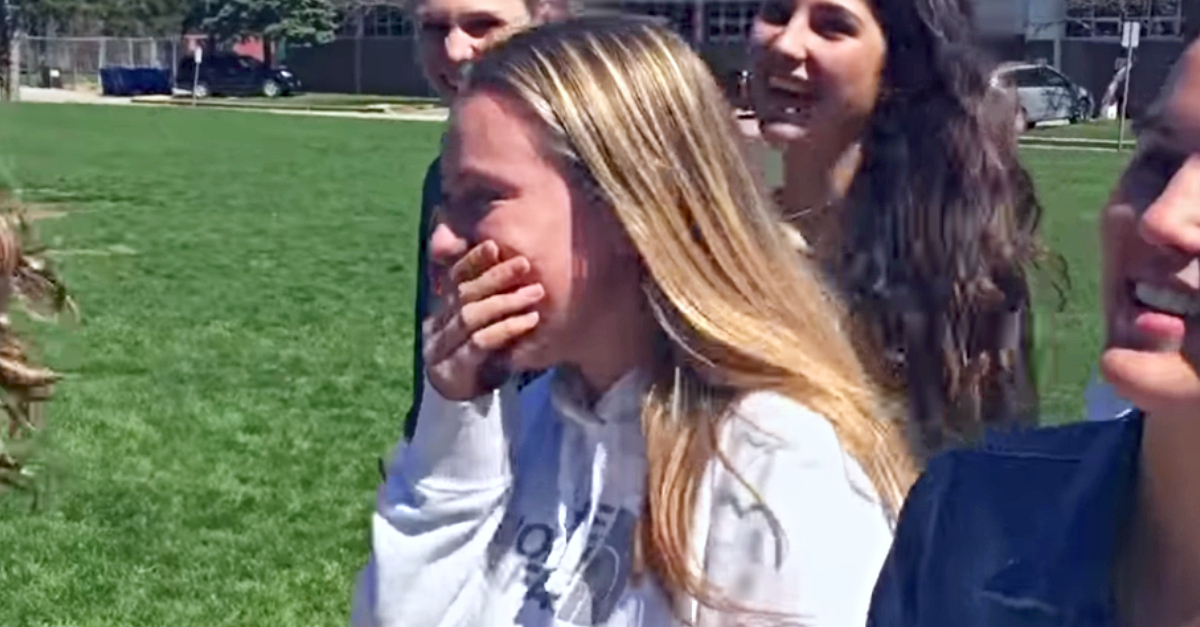 After Dwayne Johnson had successfully surprised Katie with the announcement over the school’s loudspeaker, he posted why he did it on Twitter and sent fans into a frenzy.

He wrote: “I was so impressed by this young lady’s charm and confidence to even ask me (ladies always get shy in front of me) that I had to do something special.” 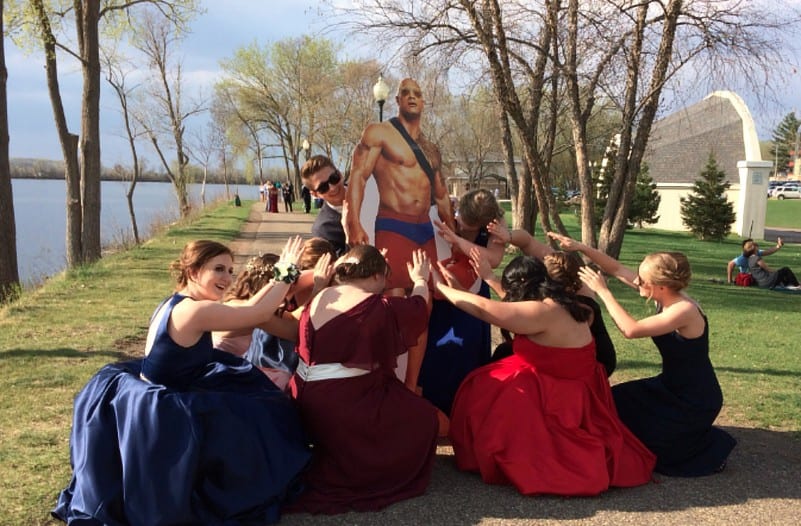 One commenter wrote: “This video made a grown man shed a tear. So awesome! The Rock really is the coolest guy in Hollywood. So excited for Katie and her friends. Keep up the great work Rock!”

Another couldn’t believe that Dwayne Johnson took the time to respond to his biggest fan: “This is the cutest thing, you go Katie!! And what’s even more inspiring is that someone as famous as @TheRock has responded!! I love that he’s humble, other celebs just ignore their fans mostly.” 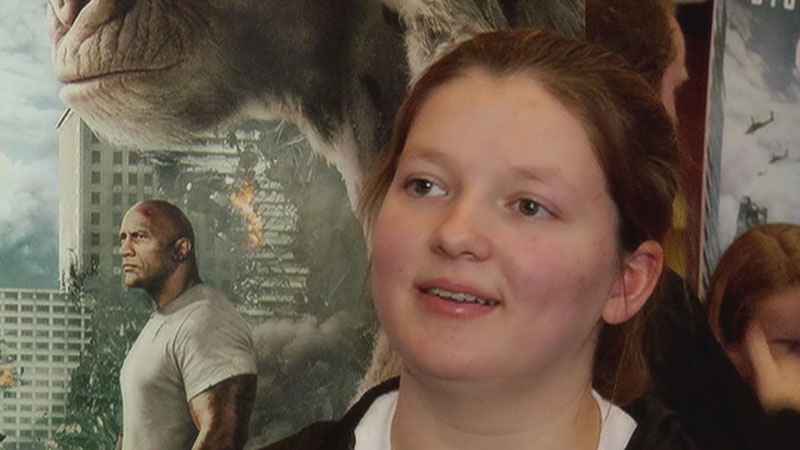 Katie had taken a chance, and it had paid off in the most spectacular way. The moment that her idol’s voice came over the loudspeaker was undoubtedly the finest moment of her high school career.

Soon, the media got wind of the amazing story. Katie had no idea that her 15 minutes of fame were just beginning! 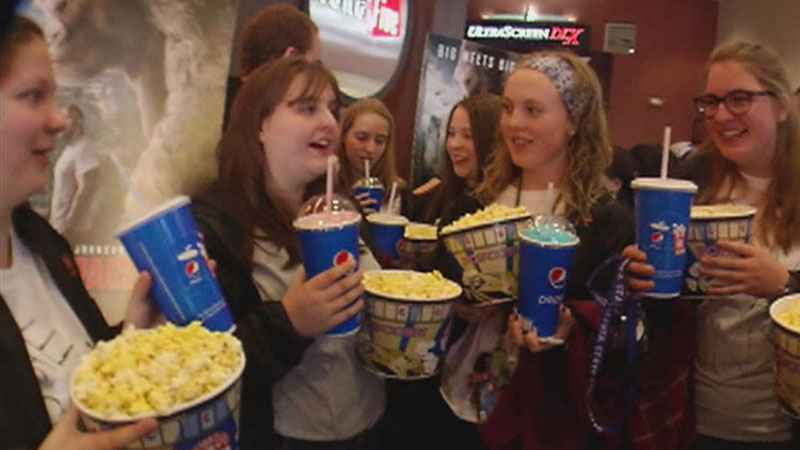 Everywhere she goes, people recognize Katie as “The Rock girl.” Her best friend, Hannah Gilsdorf, says that strangers on the street approach her on a daily basis.