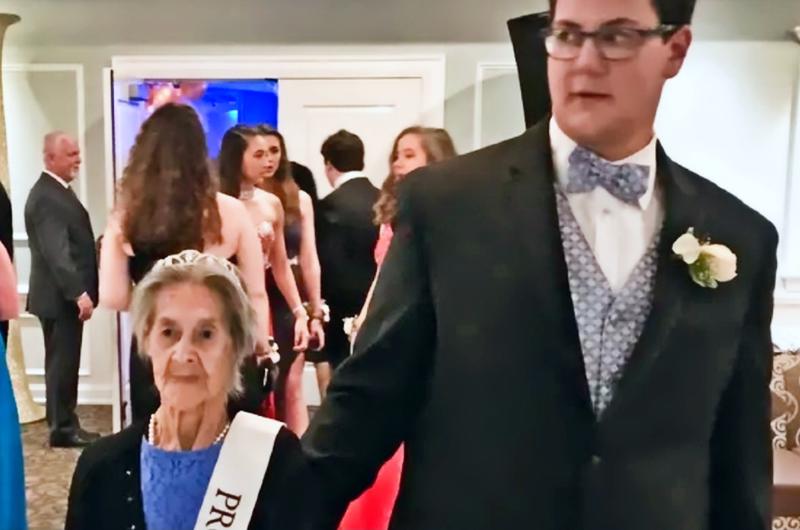 He rashly left the principal’s office in a mood. How could they say no to bringing her? It’s not like this would affect anyone else.

When he did bring her everyone stared. She was the oldest woman but Conner didn’t care, other people would have to mind their business.

He wasn’t extremely popular or nor a loner either. He was an average guy who kept his friends close and didn’t keep attention.

Conner’s father tragically passed away when he was young so his single mother and grandmother raised him. His mother worked to provide for him so he spent a lot of time with his grandmother.

His grandmother was Betty Jane Keene, a strong 93-year-old woman who loved him very much. Conner wanted to repay her somehow. But things would get complicated when he tried.

He remembered his grandmother talking about one of her only regrets in life being that she never attended her prom. Her family, unfortunately, couldn’t afford it when she should have had hers.

So Conner thought he make her regret into a reality by bringing her to his prom. But he couldn’t foresee what was coming.

She smiled with joy and accepted his invitation. He would pay for her ticket and give her the details.

He knew what he was doing was a little unorthodox but he didn’t care. Even if people stared, it wouldn’t matter to him. But other people would make it their business.

Conner told his grandmother to look for her dream dress while he bought the tickets.

“I’ve always shopped at Draper’s and Damon’s and so I had a catalog and I flipped and I saw this pale pink long dress with a light jacket, and I thought I looked good in pink,” Betty told Conner who couldn’t have been more ecstatic.

Connor knew he was doing the right thing when he saw how happy his Grandmother was. But he had no idea what was brewing behind the scenes.

Conner would get a letter that he hoped was the tickets, instead, it denied his grandmother entry into the prom. He even had to go to his principal to discuss it further.

When Connor met with his principal, he plainly told him that it was against school policy to bring an overaged woman to prom with him.

When Connor tried to explain to the principal that she was his grandma and he wanted to do something nice for her in return for raising him, the principal looked unimpressed. But what he said next shocked him.

The principal continued to say that the age gap was inappropriate and went against their policy. “Rules are rules”, he said. Connor was shocked. It’s not as if he was actually dating his grandma!

He left the office disgusted at the principal’s lack of understanding but he wasn’t going to give up on his grandma’s wish that easily. He had a plan.

Connor let the whole school know about the predicament he was in with his prom date. At first, people thought it was weird to bring your grandma but after he explained why they couldn’t help but admire his kindness and became enraged by the principal’s reaction.

Connor released an online petition asking for help and it spread like wildfire.

The principal had no choice but to approve of his date by the time the media got hold of his story.

When Connor showed up to prom with Betty, he received roaring applause as they stepped into the hall. Betty smiled ear to ear as she re-lived her younger years. They wore matching outfits and danced the night away. But was all the drama worth it?

Life Of The Party

“I told her to turn her hearing aids down before we went,” Connor laughed. “Everyone was really nice to her,” he said. “Everyone came up and spoke to her.”

“It was wonderful. It was really great,” Betty told ABC News of her magical evening at her first-ever prom. And what’s more, was that everyone seemed to know her before she even arrived!

“He had told all his friends. Every boy and girl. There were about 100 children at that dance and it was so lovely and they all came up and shook my hand and then I got Connor to dance with me. He’s not a dancer, but I am.”

“Jackie, my daughter, did my face and made me up. And I had my hair done Saturday and my nails done. I was really dressed up for a 93-year-old.” Betty proudly said. And what was her favorite part?

“Dancing with Connor,” she said sweetly. “I thought that was great”. For Connor’s mom, she couldn’t have thought of a cuter occasion for them both.

“It just warmed my heart,” said Connor’s mom. “They both had a good time. It wasn’t like anyone’s arm was twisted to go. Both of them had a wonderful time and they both said it was the best thing ever.” But will Connor do the same next year?

Hopes For Next Year

“I won’t go next year,” Betty laughed. “I want him to find a girlfriend”. With the amount of attention and popularity Connor received for making his grandma’s wish come true, we’re sure he won’t be stuck for a date next year!

And who knows, at this rate, maybe he’ll even become prom king!