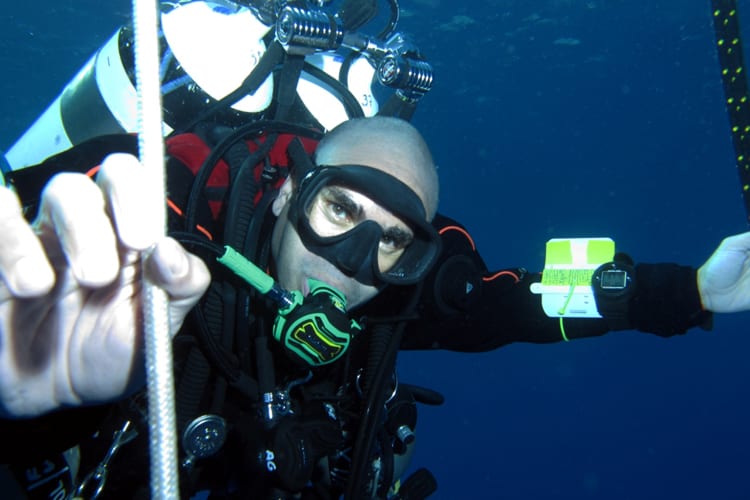 It’s often said that we know more about the surface of the moon than we do about what lies within our own planet’s oceans. While that may be true, we can be absolutely certain about one aquatic detail. Namely, that the underwater records presented here are enough to amaze and impress you — and likely convince you to leave both underwater and lunar exploits to the experts.

See what the weirdest 15 underwater records:

Being put up in a tank filled with water can also be considered being underwater. That was the condition Tom Sietas was placed in when he created his breath-holding record.

Sietas spent 22 minutes and 2 seconds in the tank. You will be forgiven if you thought he had hidden gills because this is one of the craziest underwater records to think about.

This is one difficult underwater record.

Hitting the gym and bench pressing a barbell seems okay, but pulling it off underwater without any breathing apparatus is very impressive. Ex-professional swimmer Gerald Rioual did this feat this at an impressive time of  90 seconds.

The blue whale owns this underwater record without any challenge

With a length spanning three buses, the blue whale is the largest mammal. Eclipsing even the weight of dinosaurs, the blue whale’s heart weighs about 180kg. Even a human weighing this much is considered overweight.

Migration is necessary for animals to survive changing seasons or searching for breeding grounds during mating season.

The gray whale does this with much gusto, covering a distance totaling 14000 miles for a round trip. This sets the underwater record for the longest migration.

Micheal Phelps, an all-time Olympic great is regarded as the fastest swimmer has nothing on this sea creature.

The sailfish move at speeds up to 40km/h, or 25mph, compared to the Olympic legend who swims at about 8km/h or 5mph.

The deepest part of the ocean has a depth of 11,000 meters. This trench would successfully swallow up Mount Everest, and the peak still wouldn’t make it out of the ocean.

Only a few people have managed to set an underwater record by visiting this spot. The first set of people to do so were Jacques Piccard and Don Walsh in a submarine called the Trieste in the year 1960. This is probably one of the most dangerous underwater records on this list.

9.) The Longest Ever “Flight” by a Flying Fish

This is one of the most amazing underwater records set by an aquatic denizen that spends a lot of time above sea level. The longest ever “flight” by a flying fish was clocked at over 45 seconds. This 2008 record beat the record set 80 years earlier by three seconds.

Flying fish don’t fly in the traditional sense, as they generate no real lift, but that is some seriously impressive gliding by a sea creature.

The world record for the deepest ever scuba dive (without the use of a specially pressurized suit) is held by a gentleman named Nuno Gomes. In June of 2005, he reached a depth of 319 meters (or 1,046 feet) underneath the Red Sea.

Who knows how long he will hold this record? We’ll have to wait and see. He has a good chance of keeping this underwater record for a while, but he beat the previous depth record by a mere six meters.

7.) The Traditional Pearl Divers of the Arabian Gulf

The people boasting the most impressive underwater abilities and underwater records are the traditional pearl divers of the Arabian Gulf.

Deep diving has taken place in many parts of the world from sponge diving in the Indian Ocean to pearl diving in the Caribbean. But for hundreds of years, the Arabian divers routinely completed the deepest dives, often to depths more than 130 feet. Records of these dives date back almost a thousand years and continue in the modern era.

6.) The World’s Most Impressive Dives

The human being who completes the world’s most impressive dives is a statuesque blonde woman named Tanya Streeter. Ms. Streeter has set multiple underwater freediving world records, including swimming to a depth more than 136 meters and back up again in one breath.

She routinely completes underwater swims lasting more than six minutes. Next up? She’s planning to try for a record 145-meter dive.

5.) The Underwater Record for “Best Diver” Went to the Sperm Whale

These mammals (see, we’re not counting animals that “breathe” using dissolved oxygen in the water (that’s cheating) take the trophy for the underwater record of the best diving, thanks to their regular visits to depths nearing 10,000 feet below sea level.

The next deepest diving mammal, the beaked whale, has been known to spend time around the 6,500-foot depth. That’s still impressive, but they’re not battling giant squid down there like the sperm whales.

633 divers in 2019 went to a Florida beach to start cleaning up the litter in the ocean.

There were 633 people that entered the beach between 9am-11am. They stayed beneath the waves for at least 15 minutes.

Now that is a strong person.

Dan Meyer swallowed two swords at the same time while he was underwater.

The Mako shark is the highest jumping fish, able to reach an astonishing 30 feet out of the water!

Now that is impressive!

Do you like learning about the ocean and underwater records? Read our next article to learn about records you won’t believe anyone bothered to set.