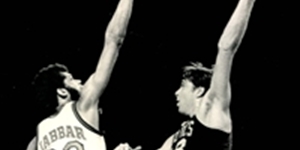 There’s arguably nothing that makes an NBA defense more formidable than a truly proficient shot blocker. After all, what’s more intimidating than a big man waiting patiently for his opponent to break through the exterior defense, just so he can cock back and toss his sad little layup attempt into the fourth row, spilling some guy’s nine-dollar beer?
A truly great swat-man is hard to find, and these are the top five in NBA history.

Though injuries hampered “The Admiral” late in his career, he still managed to become one of only a handful of players in NBA history to average 3.0 blocks per game. Over the course of 14 years and 987 games, the first overall pick out of the Naval Academy turned away 2,954 of his opponent’s shots, leading the league in blocks twice and taking home two Defensive Player of the Year awards. If not for missing all but six games of the ‘96-‘97 season, Robinson would have easily eclipsed 3,000 career blocks and been higher on this list, but then again, that injury eventually landed the Spurs Tim Duncan, so it worked out pretty okay.

Despite standing 7-foot-4-inches tall, Mark Eaton was never great at putting shots in the basket. But boy, could he ever swat them away. In just 11 seasons in the league, the Utah Jazz center blocked 3,064 shots, good enough to land him in fourth on the all-time list, a massive accomplishment considering the fact that he played more than 300 fewer games than those ahead of him on the list. Just a fourth-round pick out of UCLA, Eaton proved to be an absolute steal, averaging a whopping 3.5 blocks per game, leading the league four times, and winning two Defensive Player of the Year awards.

This all-time NBA great was more than just goggles and sky hooks; the man was also an absolute block-machine. In fact, Kareem would likely be the all-time league leader if not for the fact that the block didn’t become an officially recorded stat until his fifth year in the league. Based on even modest assumptions of his numbers, it’s likely that his 3,189 career blocks would have been closer to 4,000 had they all been counted. While winning an unbelievable six MVP awards throughout the 70s, Kareem led the league in blocks four times, and was in the top two every year but one.

While Dikembe may never have turned into the offensive weapon coaches might have hoped for, you all still remember exactly who he is for one reason … the finger wag. Mutombo flashed his signature “finger wag” 3,289 times over his 18-year career, constantly reminding opponents of the poor choice they made after he turned away yet another of their puny shot attempts in the paint. Playing for six different teams, Mutombo retired with an average of 2.8 blocks per game, four Defensive Player of the Year awards, and led the league in swats for a ridiculous five straight years from 1993 to 1998.

“The Dream” did a lot more than just drive defenders insane with his ridiculous repertoire of moves on the offensive side of the floor, he also happened to be one of the greatest defenders to ever play the game. During the late 80s and early 90s, Hakeem absolutely dominated the paint, leading the league in blocks twice, and – at the very least – always landing in the top five at season’s end. Over the course of his illustrious 18-year NBA career, the Hall of Fame Houston Rockets center averaged 3.1 blocks per game and retired with 3,830 total for his career, good enough to land him atop the list of all-time blocks leaders.
Must Read
Just Food For Dogs
Man Vanishes After Winning $326 Million
Married Couple Trying For Baby Learn They're Twins