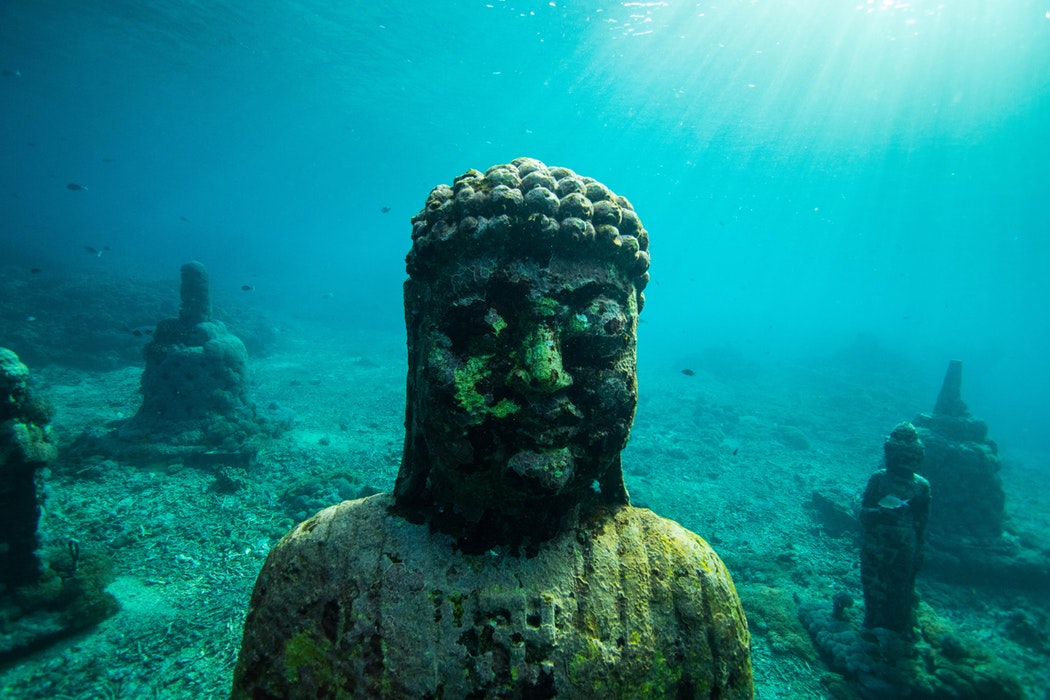 Humankind has created some amazing inventions: machines for flying through the air at 40,000 feet; gear for breathing underwater at a depth of 100 feet; and gadgets for racing down the side of a mountain at 100 mph. There’s one achievement still missing: time travel. Or is there?

The beauty is, you can go back in time with the help of one of those previously mentioned inventions: scuba gear. Hidden beneath the deep dark blue are sunken cities from antiquity just waiting to be explored.

Many of these ancient cities were found quite recently, thanks to modern technology and, for the most part, sheer dumb luck. The stories of these ancient civilizations flood our mythology books, movies and television, but how much of these were actually true? Uncovering these sunken cities could be the key to unraveling some of the mysteries, especially why they were lost in the first place. Although the displaced inhabitants shared their stories for us to enjoy, as they were passed down from generation to generation, some truths were undoubtedly lost.

Now is the time to dive a little deeper into antiquity, no pun intended. We’re not promising to share the secret location of the Lost City of Atlantis, but if you’re a mythology buff or simply a purveyor of beauty from a long, long time ago, then this one’s for you. Feel free to play around with the maps on each page to see where each one is located.

As you sink to the bottom of Qiandao Lake, you’ll go back in time almost 2,000 years. Lion City was immaculately preserved under 130 feet of water when it was submerged more than 50 years ago. This was the result of a newly built power plant in 1959 that needed to dam a nearby river causing it to flood the Thousand Islands area.

The result: a time capsule effect on the city that has kept everything intact. As you explore this ancient city, you’ll find wooden beams, stairs in ancient houses, walls and marvelous arches that have been shielded by erosion, wind, rain and sun. You might not be able to find the famed Atlantis, but China’s version is a close second — and we know this one actually exists.

This town was an upscale resort amid the Roman Empire. It was thought to be superior to Pompeii, Herculaneum and Capri – and those were some high-class places. The incredibly wealthy Romans built luxurious villas here between 100 BC to 500 AD, and the infamous Julius Caesar even owned property there.

This resort was a hotbed of hedonistic offerings, corruption and scandal and was justifiably dubbed the “vortex of luxury.” Think of it as a modern-day Las Vegas, where what happened in Baiae stayed in Baiae – for over 1700 years. Although the resort was lost as the result of the volcanic and seismic activity, many parts of it still remain intact. Want to check out Caesar’s villa? Set your sights on Baiae.

3.) The Ancient City of Dwarka Ruled by Lord Krishna

In the early 2000s, researchers conducted a pollution survey off the west coast of India but ended up finding a lot more. Sonar machines started picking up signals of stone structures underwater, and researchers were surprised to find two cities. Upon closer inspection, they discovered that the cities were positioned next to ancient rivers, and the area dated back 32,000 years. This led to an extensive search of the surrounding waters, which struck gold.

Off the coast of Dwarka, explorers found signs of another settlement just 70 feet underwater: the legendary city of the deity Krishna. Ancient Sanskrit texts say that this powerful city was ruled by this legendary god of Hindu culture. He protected it from attack by firing weapons that roared like thunder. and when he left, the city was taken by the ocean. A mythological story at its finest …

2.) The Lost City Of Heracleion In Alexandria, Egypt

Hidden for almost 1,200 years under 30 feet of water, the lost city of Thonis-Heracleion sits off the coast of Alexandria in Egypt. For centuries, trading ships entering the Nile were greeted by a statue of the god Hapy, known as the god of fertility, lord of the river and the live-giving steward of its floods. This settlement was once known as the greatest port city on the planet.

Upon the discovery of this ancient statue, the team unearthed the ruins of temples, shards of pottery, precious jewelry, coins, oil lamps, processional barges and busts. A network of canals linked the harbors, wharves, temples and tower-houses, and the ferries and bridges helped control boats coming in from the Mediterranean. Although many of the artifacts have been removed, you can still dive there in crystal-clear water.

Off the southern coast of Yonaguni, Japan, and in close proximity to Taiwan are ruins dating back 10,000 years. Since the ruins are not as typical as the ones found in other parts of the world, experts are still debating whether they are manmade or a natural formation. They were discovered in 1995 by a stray diver off the Okinawa shore who saw stacked blocks.

Have you visited any of these sites before? Share any photos or videos from your adventures below, or tell us what your favorite sunken cities are.