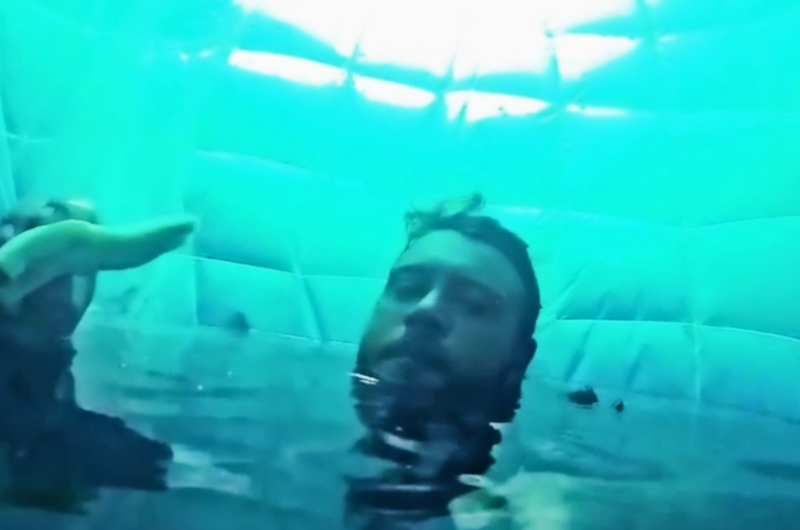 He felt the water coming down the dark hallway, pushing him back into the bathroom.

He felt debris hitting his body in the dark. It was cold and wet. His thoughts only reflected on his family, and his crew. He knew that there was only one thing that he could do.

Harrison Okene knew that his job came with its dangers.

The worst were pirates, storms, and natural disasters. But he needed the money and enjoyed cooking meals for his crew. He knew he had a lot in life that he was grateful for.

The company said that he had to lock his cabin door at night in case of a pirate raid at night.

But Harrison had no idea that it wouldn’t be pirates that he’d have to worry about in the pitch-black darkness of night. But he should have counted himself lucky that he had to use the bathroom.

He had now gotten used to the way that the boat swayed over the ocean tides.

But when he heard a loud crash and the wall of the bathroom now became the floor, he knew that the worst possible scenario had happened. The boat had capzied. He opened the bathroom to hear the flood of water filling the hallway.

He heard the panic in his crewmate’s voices as he was hit with water like a truck, then everything went dark.

Harrison then felt his way to a small air pocket, he had somehow survived and was in a small room. But he knew there would be much more to get through.

He was blind in the dark and knew he couldn’t stay put, he swam to another room feeling with his hands. Thankfully the air pocket here was much bigger.

He managed to get the paneling of the wall and constructed a floatation device with a mattress. He had to get most of his body out of the freezing cold water before he could think of anything else.

He only thought of his family in the silent darkness.

He was completely alone and thoughts of home comforted him. But then he heard things that no man should hear. The predators in the rooms adjacent to his were eating friends he had been making dinner for mere hours before. He started to weep, hoping that they wouldn’t find him and praying that he would make it home.

He didn’t want to be fated to be a shark’s dinner. He had made it so far and to his knowledge, he was the only survivor.

He just wanted to hug his mother and look at his father’s face again. He even wondered if help was coming, would his company care to look in the wreckage for him? He knew he was on the bottom of the sea floor.

He knew he was weakening by the hour and eventually started seeing lights coming in from underneath the water. Were they there to take him to heaven?

He didn’t even know if it was worth struggling anymore, the coke bottle he had found was now empty and he knew his air pocket was filling with deadly carbon monoxide by the hour. Then he reached out.

Then a single hand touched his from under the water and startled him.

He wasn’t seeing things. It was a real diver that had come to save him. He couldn’t believe it, he must have been the luckiest man alive. But he knew that getting back onto the surface wouldn’t be so easy.

His body shook uncontrollably – from the cold and the utter joy of such and unbelievable rescue.

But through the microphone in the diver’s helmet, he heard how he had been there too long and the team above was trying to figure out how to get him to the surface safely. It wasn’t long until an empty helmet was put into his hands. The plan was simple.

It had been three days to get a deep-sea salvage saturation diving team to the location.
By then, everyone had braced for the fact it was a body-retrieval mission. They weren’t prepared for any survivors. So, there was only one thing to do. Harrison embraced the frigid waters as they slowly pulled him into a decompression bell-chamber.

He sipped on water while the tears uncontrollably streamed down his cheeks.

The divers sat around him explaining what had happened. There was an immediate first time on site just after the tugboat went down, but they had banged on the hull with no response. That’s why it took days to come back with a better team – they needed better gear and people for a longer salvage operation. They had no idea Harrison had been down there and alive for the three days.

The entire ordeal had been so disorienting, he thought he had only been done there for 12 hours! It would take four more days before he would be allowed to leave the decompression chamber. But he had no problem with that.

He was alive and floating above the waves once again!

He put his head in his hands and prayed. The only thing that had saved him was going to the bathroom at that moment and being lucky enough to find an air pocket. It really was a miracle.