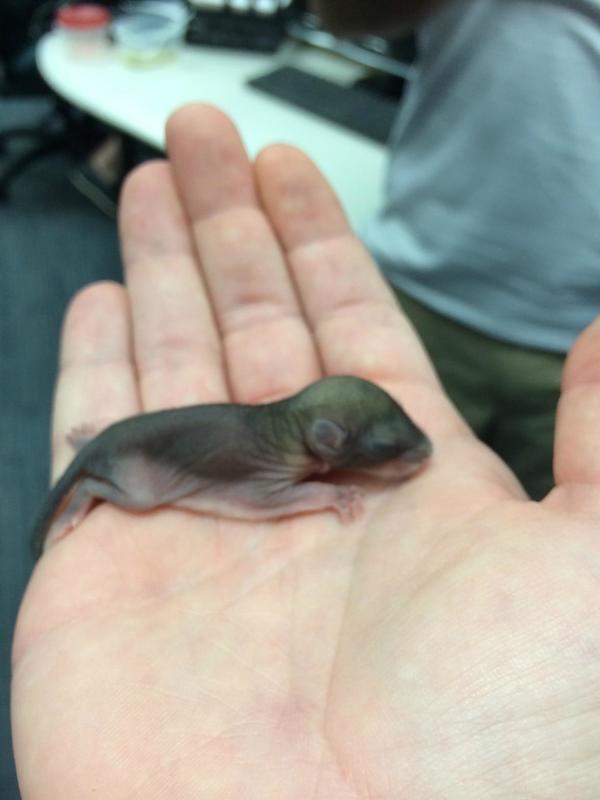 Jeff Longo thought it would be a day just like any other while he was walking home when he noticed something on the sidewalk. What he found made stop him stop dead.

Right in front of Jeff, there was a small creature lying on the hot sidewalk. It didn’t look there was any of its family there to help it. It wouldn’t last long in the Florida sun.

Longo knew he had to do something. The small creature wouldn’t have a chance on its own, so Longo felt that he would be the one to lend it a helping hand. He picked up the small animal and rushed home. What would have been the end for this animal became a beautiful story and gave Jeff Longo a new best friend.

Back to the important question though… What could this creature be?

Not On His Watch

The creature was blind, hairless, and had small razor-sharp claws. No one would have thought that this thing was cute, but that didn’t matter to Jeff Longo when he stumbled upon it on the hot sidewalk in Tampa, Florida.

Longo assumed that its family must have just left it there to bake in the sun. He didn’t know what this small animal was, but he wouldn’t let anything happen to any animal while he was around. Nothing deserves to die in the hot sun.

Longo could have assumed that it was some kind of tiny animal like a rat. It was no bigger than his pinkie finger. But nature is sometimes weird and assuming won’t get you anywhere.

An example is a kangaroo baby, they’re as small as a grain of rice when they’re born. This is so they can comfortably fit into their mother’s pouch where they can safely grow. Now considering that – this could be any kind of animal.

Since it was so small Jeff Longo had no idea what this animal could be. So Longo hopped on the internet for answers. Once on Reddit, his questions were met with many heartless people, saying that the animal would die and his efforts would be in vain.

Longo didn’t let that dishearten him. He knew it was fate that he found the animal when he did. He felt like all this animal needed was love and care and soon afterward – it would be healthy and safe.

Nursing It Back To Health

Still not knowing what the animal was, he researched the necessary information to give this animal the right diet. He needed to be careful not to give it the wrong kind of diet or it would suffer for it.

He fed the animal from a bottle in which he mixed puppy formula and cream. As he kept it up, the animal started growing fur and whiskers. Every day he continued to feed it, it would get bigger until its eyes opened. Once its eyes were open it was much more adorable. It started to resemble a rodent. But Jeff felt that something was off.

After three months, Longo did everything in his power to rehabilitate this animal. After having been with it for so long, he decided to name this strange animal Biscuit.

As she grew, her ears fluffed up and her fur grew even thicker. She now looked more like a gerbil than the alien she was three months ago. But Jeff still couldn’t really tell what she was. Maybe she was a hamster? A prairie dog? A guinea pig? No one knew.

What kind of animal was Biscuit? She grew gray fur all the way from her nose down to her tail. She was a far cry from her alien form mere months earlier.

Once her tail had developed into a broad furry appendage, Jeff knew she wasn’t a rat. Her belly was full of white fur that looked like the prime spot for belly rubs. And who knows? Maybe she would love them.

It was a difficult task raising an unknown species and nursing it back to health. But Jeff had perseverance little others had. And thanks to that, Biscuit was thriving under his care. She wasn’t fighting for her survival anymore.

Somehow the dogs that Jeff owned understood what he was doing and became friends with Biscuit. Soon enough Biscuit became a member of the Longo household and even the dogs enjoyed having her around. Jeff told reporters from the Daily Mail: “I just have to watch them so they don’t accidentally squish her.”

Jeff would never leave Biscuit alone, he even took her with to his job. They must have been okay with furry critters. Biscuit would ride in Jeff’s pocket when he went to work every day.

As she kept growing up, people Jeff showed her too started saying that she resembled a tree squirrel. But Jeff felt that she was different from a squirrel somehow. It was a feeling he had.

A few clues helped Longo identify his new friend. Little Biscuit seemed to have a little extra skin around her underarm, her tail was fairly flat and bushy, and her big eyes were designed to help her see in the dark.

With a little research, Longo discovered that his new furry friend was a southern flying squirrel, a nocturnal creature that can glide for more than 150 feet.

Once he researched enough to put the puzzle pieces together, he was even more capable of providing Biscuit with the necessary diet, nutrition, and living environment.

He found that she really enjoyed fruits, nuts, and seeds. Once Longo discovered Biscuit’s true nature, he worked hard to create a fitting environment for her. For example, he added a pouch in Biscuit’s cage because flying squirrels like to make their homes in small places like woodpecker holes and nest boxes.

Whenever he is present, Longo lets Biscuits out of her cage and lets her explore the house. He told the Daily Mail he has covered most of his furniture with cloth in order to allow the squirrel to grab on and crawl around.

Longo created a Go Fund Me account a while back to raise money for a new enclosure for Biscuits so she can have more room to spread those wings! She loves her new home! The next question was keep her as a domesticated pet or release her back into the wild?

This is a tough question for many reasons. Although some people believe that Biscuit should be released into the wild, it’s more than likely she would not survive.

Since she was hand-raised by Longo at such a young and impressionable age and has become accustomed to his dogs, she has no fear of humans or canines which could coax her into a deadly encounter. Which means only one thing…

Happy Where She Is

Longo will have to continue to look after her. They are family after all!

Fortunately, it looks like Biscuit is very happy where she is. Biscuit likely escaped death the day Longo found her and instead, gained a new dad and best friend.

She’s even been spotted trying out her skills on this tiny skateboard.

Thanks, Longo, for taking a chance on this tiny creature and thanks, Biscuits, for being a fighter and having the perseverance to live against all odds…oh, and thanks to them both for warming our hearts with their story.