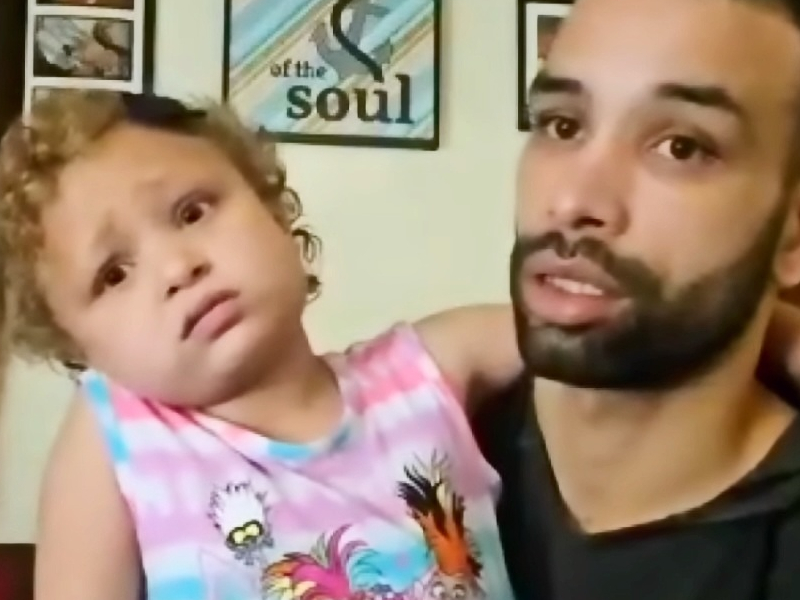 He felt so enraged that nothing could describe what he was going to do.

The fact that one of her teachers cut her hair without asking him. It would spiral out of control when he showed them the lengths he was willing to go for his daughter.

Getting Ready For School

Jimmy smiled at his daughter and combed her hair. She looked at him gleefully as they both raced downstairs to enjoy the breakfast her mother had made for them. They then packed her lunch and sent her on her way to school.

It should have just been an ordinary boring day, but it was far from it.

After a dull day at work, they would come home to get ready for their daughter’s arrival. But when they noticed her normally cheerful demeanor replaced with tears, they knew something was very wrong.

Jimmy stood frozen as his wife sprinted forward and ran her fingers through Jurnee’s jagged locks.

“What happened?!” he asked. Jurnee sniffed again and sobbed. “A student cut my hair. He laughed.” He let out a long sigh. It was inevitable that little tots would play hairdresser at least once, but this was crazy. He desperately hoped that this was just a one-time thing but he had no idea what was coming.

Jimmy put his hand over Jurnee’s hair and gave her a big hug. “Anymore, no kid should cut your hair ok? Don’t let them, ok?” he said. Jurnee stifled her sobs as she nodded in agreement.

They rushed her to the hairdresser, where they all agreed on an asymmetrical cut. That should have been the end of things, but it only got worse from there.

Jimmy decided to report what happened to the school. He wouldn’t take any other action because he knew that children do these things when they are young.

He did however have a serious talk with Jurnee, telling her she mustn’t let anyone cut her hair like that. But he could never have expected what would happen when his daughter came home from school only a day later.

Why Is It Shorter?!

“What did we tell you? I thought I told you no child should ever cut your hair” Jimmy started reprimanding his daughter. But just as he started lecturing her she said “But dad, it was the teacher.”

Jimmy froze, he couldn’t believe what he was hearing. He sat down with his wife, if the teacher was the one who did this, why hadn’t they run it by them first? He needed to hear the story again.

He didn’t want Jurnee to think he didn’t trust her, but also didn’t want to go wreaking havoc on a teacher that didn’t do anything wrong.

If a teacher had cut his little angel’s hair, why did no one say anything to him? He decided to call the school to find out the truth, but it would have his blood boiling.

The principal not only said that the teacher had cut it, but that she wasn’t wrong in doing so and wouldn’t face any kind of repercussions.

They wouldn’t be harsh but this was the first complaint against her. But after Jimmy heard things like “It’s only hair” and “not a big deal” he wanted to make sure they would all pay for doing this to his poor angel.

Not only was the experience of a teacher cutting her hair against her will traumatic enough for the little girl and her parents, but there were knock-on effects too.

The next day, kids pointed and made fun of her cut hair – sending her home crying again. The next phone call would trigger an explosion.

Make It Go Away

Jimmy listened with a slack jaw as the principal said, “What can we do to make this go away?”.

Jimmy was in disbelief at their flippant response. Were they serious? Did they just want to sweep this under the rug? They still hadn’t even apologized or acknowledged that they did anything wrong. They stuck firm that the teacher did nothing wrong and that he was over-reacting. But they had no idea who they were dealing with.

Jimmy was now beyond livid. Who did they think they were? They acted as if his child’s experience was nothing but a bit of dirt on their shoe.

Jimmy couldn’t let them get away with this. He wanted revenge. He sat fuming after he ended the call. How could he make them admit their wrong and pay for what they did? An idea popped into his mind.

Jimmy knew that if he wanted to make the school pay attention to him and take accountability for what they’ve done, he needed more people to know about what happened here.

Jimmy went to social media and vented his anger. Just as Jimmy predicted, the post went insanely viral. Now, the school was forced to acknowledge the violation they ensued on Jimmy’s daughter.

The public was outraged at the school’s behavior. Many parents commented expressing their sympathy for Jurnee and Jimmy and their anger at the teacher for doing that as well as the school for defending the act.

Only now, with building media attention, did the school finally take action – and it was just as insulting as everything they had done up to that point.

Looking Into The Event

The school was forced to hire a “third party” that did a thorough “investigation” into the matter and ruled that the teacher did violate school policy. However, according to them it wasn’t really that bad and was completely excusable.

The teacher would only get a “last chance warning” because she had been a “model teacher” up until that point. How they determined to deal with it shocked the community.

The “third party” agreed that it would be equally appropriate for the school to give her paid administrative leave! This wasn’t half enough to satisfy Jimmy and his wife.

Jimmy watched as his wife balled furious tears. Even little Jurnee was having nightmares about her hair falling out. This was getting out of control and the story wasn’t even over yet.

Jimmy gripped his morning coffee, reading through the interesting email that had just arrived in his inbox.

By now, his story had spread nationwide and agencies in his local area were made even more furious at the lack of real repercussions the teacher faced. If this case wasn’t made an example of, there was no telling it wouldn’t happen again.

Jimmy read through his emails and found a notification from The National Parents Union.

The National Parents Union wanted to help them. The fact that the school was doing nothing, only apologized when the world found out, didn’t matter. They had broken the rules on a national level. He couldn’t believe what they did next.

Jimmy talked to The National Parents Union. They wanted to set up a Go Fund Me page for him. They agreed with his sentiment that this case needed to be made an example of.

Schools simply couldn’t breach a child’s and parent’s civil rights like this and not have to face any punishment. What happened wasn’t good enough. So they formed a plan.

The union set up a Go Fund Me page, and Jimmy saw the donations pouring in – and all of it would go to a specialized legal team.

When they asked what Jimmy wanted, he didn’t even have to think. “A million dollars,” he said. He knew the number was outrageous, but he also knew that hitting groups in their wallets was the only way to affect change. The school, it seemed, was ready to fight back.

Jimmy and his wife seethed as they read the school’s response.

“We will aggressively defend against these baseless allegations in court and will not allow this to distract us from our mission to provide every child a world-class education that prepares them for college and careers.”

The school districted wanted to roll the dice with the federal court? So be it.

They had transferred Jurnee to a different school. But that didn’t mean they were giving up. Their little girl’s hair was part of her identity. She loved to share that the color came from her mom and the curls came from her dad. Now, kids at school giggled behind her back.

Yes, her hair would grow back, but the memories would never go away.

Even Jimmy and his wife still had faded memories of school that still jabbed them once in a while. They had no idea who he really was. He was someone not to be underestimated. Why?

He was a loving dad whose baby girl had been hurt

His wife was in mama-bear mode, but he was also going to bear his claws and not stop fighting. The school wasn’t sorry at the start, but they were soon going to regret not picking up the phone and asking them in the first place … like they should have.

Jimmy’s lawsuit stated alleged that the school “failed to properly train, monitor, direct, discipline and supervise their employees, and knew or should have known that the employees would engage in the complained of behavior given the improper training, customs, procedures, and policies, and the lack of discipline that existed for employees”.

His attorney declared that the incident and the school’s response was “unacceptable”. They were going in hard!