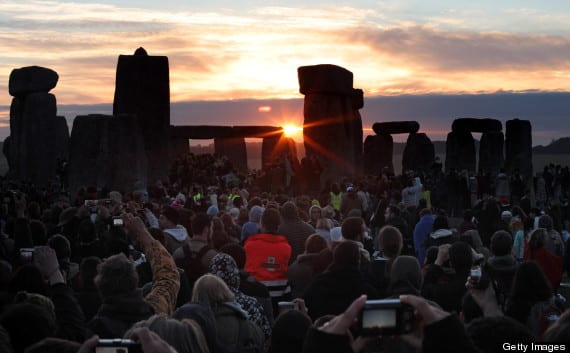 Say goodbye to the dismal walks to work and returning home in equal darkness, because the first day of spring, also known as the Vernal or Spring Equinox — or if you want to get super fancy, aequinoctium in Latin — is upon us.

Although to most it is simply a day reminiscent of being allowed to play outside longer after school or a time when we can finally start shedding our winter layers, there is a bubble of superstition, folklore and science behind this special day. Only twice a year does the sun shine directly on the celestial equator — the imaginary line in the sky above the earth’s equator. During the time of the equinox, the earth’s axis is neither tilted toward nor away from the sun’s rays, dividing the planet equally between shadow and light.

This year the Spring Equinox lands on March 20 at 4:15pm according to the Coordinated Universal Time (UTC), bringing with it the advent of the astronomical spring season. The Spring Equinox plays a large role in deciding the dates for the Jewish Passover and Christian Easter holidays, which is always the first Sunday after the first full moon following the equinox. The early Egyptians even built the Great Sphinx so thatit points directly toward the sun on the day of the equinox, while the Angkor Wat temple in Cambodia witnesses the sun perch atop the highest point of the sacred temple in perfect alignment.

So instead of frolicking around in fields full of small lambs and calves, here are five interesting alternatives to celebrate this earthly event.

Okay, let’s start at the very beginning. In the ancient Mayan city of Chichan Itza in Mexico, a great feathered snake representative of the Mayan deity, Kukulcan, descends the El Castillo pyramid during the Spring Equinox.

Areas of the ancient city were notorious for the gruesome sacrifices that took place here until 900 A.D. — when the Mayan civilization was mysteriously wiped out. But the Mayans were also known for their impressive knowledge of astrology and science coupled with their architectural skills. The Mayan people were deeply religious, worshipping Gods related to nature such as the sun, moon, rain and corn.

On the day of the equinox, sunlight on the carefully planned stairs running from the top to the bottom of the 79-foot-tall pyramid creates the illusion of a snake slithering down and merging with a serpent head sculpture at its base. Now one of the Seven Wonders of The World, it is remarkable that a civilization born in 1800 B.C. was able to match the equinox so precisely to create these images with light and shadow.

Also within the ruins of Chichen Itza, which translates as “mouth of the well,” is the Sacred Cenote, a natural sinkhole with sheer limestone walls. Visitors to the area are invited to swim in the natural wonder where people wereonce sacrificed during the time of the equinox. How’s that for a bucket list item?

Many believe it was once a burial ground, but there are more mysteries surrounding the stones, as the bluestones found in the middle of the circle can be traced back to the Preseli Hills in Wales 140 miles away from Stonehenge’s Salisbury Plain. There are no written records to explain why the stones are there, nor how they were built, and one can’t help thinking of Outlander and the fate of poor Claire if she had found herself amongst this lot.

Bringing together England’s new age tribes along with families of tourists and travelers, a mass congregation of a few hundred people gather to watch the sunrise over the stones and welcome spring. Tours are available to witness the phenomena and they also include entrance to druid ceremonies and festivities surrounding the event.

It was once tradition to drink dandelion and burdock cordial at the time of the Spring Equinox, to cleanse the body of winter hardships. Consider it spring cleaning for the body — a removal of negative energies. For pagans, this remains a time of worship to the ancient Saxon goddess, Eostre, who stands for new beginnings and fertility.

3.) Balance an Egg In China for The Spring Equinox

Well, it doesn’t have to be IN China per say, but that is where the myth originated. Eggs are an obvious sign of fertility and around this time of year they’re decorated, buried, read and even made of chocolate, but have you ever tried to balance one on its end on the first day of spring? If you have — and failed — then you obviously didn’t get the date and time of the Spring Equinox right. Or maybe you’ve just realized that the “science” behind this tradition is greatly lacking.

An ancient Chinese tradition, many try balancing an egg on its end for good luck and prosperity. They say it is possible on the equinox, due to the sun’s equal distance between north and south poles altering gravitational forces, but of course there is no scientific backing to this.

That doesn’t mean it isn’t still fun to give it a try! Einstein was reportedly skeptical. And there is no reason that this celestial alignment would affect objects on earth enough to change their ability to balance. I mean, if it were true, why can’t we balance perfectly on our heads during the equinox? Or bananas on their end? #foodforthought

2.) Witness The Ringing of The Peace Bell At The United Nations In New York City

In 1971, the United Nations (UN) Secretary-General U Thant signed a proclamation marking Earth Day (there are technically two dates used for Earth Day, one of which falls on the same day as the Spring Equinox) an international event, demonstrating support for environmental protection. The annual event is celebrated across over 190 countries by the ringing of bells and marches of solidarity around the world (some countries, including Germany and Austria, plus the UN, celebrate both dates).

This year the Japanese Peace Bell — a UN peace symbol — will be rung in New York City to mark the event, drawing a strong focus in particular toward the earth’s water and the commodification of freshwater worldwide (March 22 is World Water Day). With over 70% of our planet made of the stuff — and also around 60% of our bodies — the ringing of the bell aims to draw attention to the sustainability of freshwater on the planet. Similar bells are rung in Paris, Beijing and Vienna.

Get the whole family together at the Lefrak Theatre in the American Museum of Natural History in New York City to discover what has kept scientists and the average Joe fascinated by the earth’s relationship to the sun since the beginning of time. Founded in 1869, the museum has collected more than 33 million specimens, uncovering truths about the natural world and the human cultures that occupy it.

Behind the scenes, there are over 200 scientists continually working to unravel the world’s mysteries. Just after the equinox, on March 24, join the director of Astro Visualization, Carter Emmart, and NASA solar scientists Masha Kuznetsova, Leila Mays and Alex Young as they explain the sun-earth phenomena in an interactive 3D presentation.

Covering topics such as the aurora borealis, the Spring Equinox, extraordinary NASA observations from the August 2017 total solar eclipse and a 3D film directed by Japanese photographer and filmmaker Ikuo Nakamura, this is truly the best way to keep kids and adults entertained during a science lesson. Outside of the presentation are hands-on activities as part of the Hayden Planetarium Programs. The event is free with the purchase of a museum ticket and also free for members of the museum.

So how are you going to celebrate this year’s Spring Equinox and kickoff your spring? Leave us a comment below!