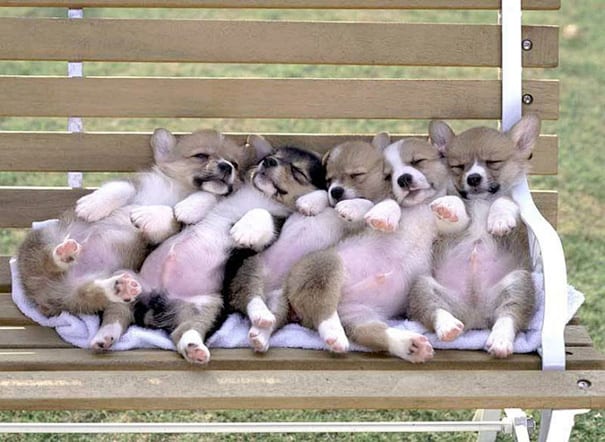 Our hearts melt when we see adorable puppy pics, and nothing is cuter than passed out pooches!

You know the expression “let sleeping dogs lie”? If the pups look as cute as these sleeping dogs,  let them keep snoozing. They’re way too cute to wake up.

There’s nothing better than a post-lunch nap. Based on the bulge in this pup’s belly, he looks like he had quite a feast and is now ready to have quite a nap.

We all feel like that on Thanksgiving, but this pup looks like he does this on a daily basis.

Six episodes in a row of a show will have you debating whether it’s time to leave the sofa or start another episode!

Looks like this pup decided to watch another, reached for the remote and then just passed out from exhaustion.

Clearly, this pup lacks a proper work-life balance if he’s passing out at the office! He must have pulled an all-nighter to get that powerpoint presentation in on time.

Either that, or he had a few too many martinis at lunch. Either case, we’ll forgive him. He’s too cute to stay angry at!

Two sleeping dogs are so much better than one!

It’s always more fun sleeping with a friend than alone, especially when that friend lets you use him as a pillow. That poor pup on the bottom doesn’t look too comfy though.

5.) When You Fall Asleep Sitting Down

Have you ever been so tired you fell asleep sitting up?

This poor pup was! He was so tired he couldn’t even make it to his bed, but just put his head down and dozed off.

This pup isn’t one to conform – while the other sleeping dogs are zigging, he chose to zag!

We can’t decide who’s cuter though, those zigging or that zagger! It’s funny how the three on their stomachs all have the exact same positions.

7.) Aromatherapy Can Help You Sleep

Maybe it’s a fragrance only for pups; we don’t think it would benefit us humans much! Bring on the lavender for us. Sleeping dogs can keep their stinky gym shoe fragrances.

8.) Some Pups Can Sleep Anywhere

The shelf at least got him off the floor so he didn’t get chilled or covered with dust. It was all going so well until he slipped!

9.) Sometimes You Just Need a Nap

We totally get it though – we’d rather nap than go for a run, too!

His owner doesn’t look too pleased though. We bet she ended up having to carry him home. Hopefully, he outgrows his disdain for exercise once he gets a bit bigger.

We can’t tell if this pup is passed out from too many Bud Lights or too much exercise!

Given those rolls though, we’re thinking it might be the former. Is there anything cuter than a fat, sleeping dog? We think not.

Oh my goodness, look at those rolls! And the size of those paws! This is going to one big pup once he grows up.

Growing pups need their sleep, so it’s no wonder he passed out sitting up (most likely after a big meal).

Who did it better: puppy or penguin?

We just need to paint his back black and put him on ice, and you won’t be able to tell the difference!

13.) Best Friends Are The Best

How precious are these sleeping dogs?

We love that the big pup lets the little pup sleep on his back. We wonder how long they lasted like this. We hope it was for a while!

You use the sofa and the ottoman!

Either that, or he couldn’t decide if he wanted to stay on the couch, get off the couch and then just decided he’d had enough thinking for the day so went back to sleep. Whatever the case, he’s adorable.

What better than to curl up with (or in this case, in) a bowl of your favorite food so the second you wake you can have another bite?

We think puppy, but to be honest we’re not really certain. The fact that he passed out in his owner’s hands has us too distracted for details.

And how cute is that little tongue sticking out?

We love interspecies friendships, and it looks like these pups and pigs are BFFs.

It also looks as though the pigs are watching over their passed out friends. Perhaps they’ve all had a long day of playing and now it’s nap time?

It’s as though this sleeping dog realized he was stuck so decided to just take a nap!

It’s a good thing his owner was home not only to snap a pic of this adorableness, but also to help the puppy out once he wakes up. We doubt he’d be able to escape on his own!

French Bulldogs are the cutest. They’re playful, quirky and great little companions. This must be one tired pup to pass out with his tongue out like that!

He’s too cute to wake up; we wonder how long he slept with his tongue out.

The size difference between these two makes it perfect for the Dalmatian pup to sleep on the German Shephard.

We hope they stay BFF’s forever; although, it probably won’t be much longer until the Dalmatian is too big to sleep atop his brother!

This is one of the cutest things we’ve ever seen!

We love how dogs like to sleep in piles together, but we’ve never seen a cat join before. We hope this is a regular thing they do; it’s too cute to have only happened once.

Option A: Curl up in a ball and squeeze into one planter.

Option B: Use two planters!

This is one smart pup. We bet he’s done this before.

This precious Golden Retriever puppy was shopped out! Good thing there was a shopping cart handy for him to nap in.

He doesn’t look very comfortable though; perhaps his owner should have put him in the bottom part of the cart.

What a rolly polly little puppy! She looks as though she’s just had a massive meal and is catching up on a few Zs before heading out to play.

She looks like she’ll be one big dog when she grows up. Her owner better cherish having her in her lap while she can, because it won’t be much longer until she’s too big for it.

How adorable is this? The cat looks like she’s not just sleeping atop this pup, but hugging him as well.

This cat is in luck, as the puppy will only get bigger and more comfortable to sleep on.

Babies sometimes sleep with their little butts up in the air, and apparently, puppies do too!

We don’t know how he’s comfortable though. And, we doubt he lasted long sleeping like that. He was probably just taking a quick snooze before running into the bush in search of something new to play with.

Well, it was the perfect bed until his head rolled off of it!

Hopefully, this sleeping dog didn’t wake with a splitting headache from all the blood rushing to his head.

How long do you think it took to pose them all like this?

We hope these two grow up to be best friends and have many more naps (and much playtime) together.

Think these pics of sleeping dogs were cute? Click “Next Story” for pics of adorable puppies and babies!