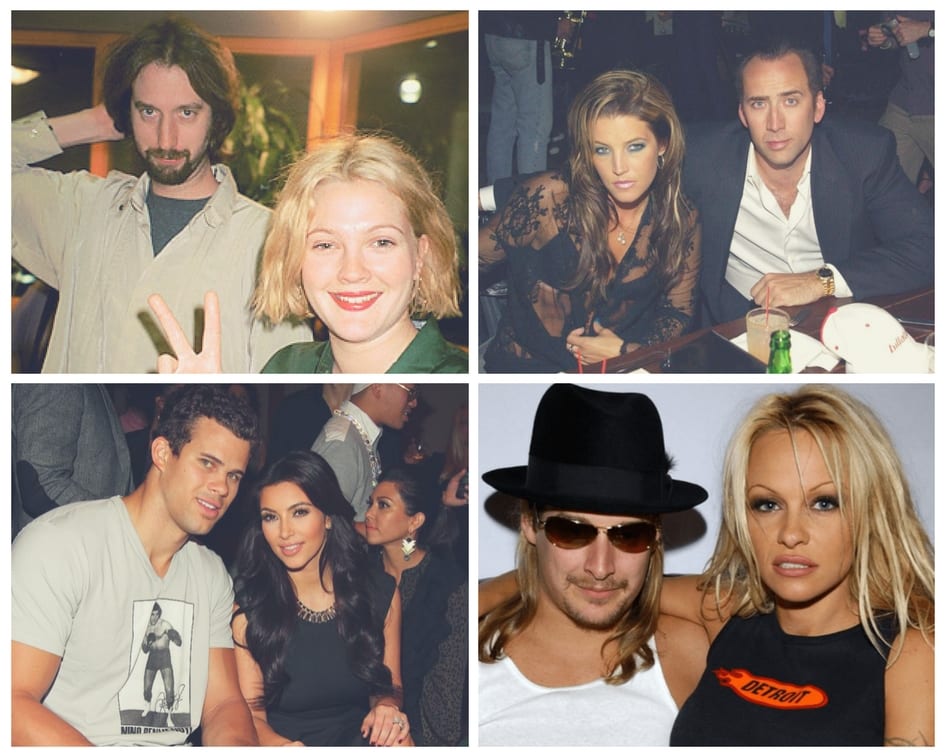 Whether you’re into following the fabulous lives of celebrities or not, when two famous people tie the knot, it’s hard not to watch in fascination. The dating lives of the rich and famous have always been a topic of conversation and fascination in pop culture, and just as we like to see the beautiful rise of a relationship, we can’t help but sit by and watch their slow (or fast) demise, too. Oftentimes in Hollywood, there isn’t much time between the sounds of wedding bells ringing and the signing of the divorce papers.

Studies show that about 40% to 50% of marriages end in divorce, and in Hollywood, we’re pretty sure that percentage is even higher. We’ve rounded up some of the shortest celebrity marriages of all time, because in Hollywood (and in real life), sometimes you’re Happily Never After.

Here are the shortest celebrity marriages ever:

You read the headlines. On August 20, 2011, reality TV megastar Kim Kardashian and NBA basketball player Kris Humphries tied the knot in a lavish wedding, and a mere 72 days later, the marriage ended in divorce.

Immediately after the news hit that Kim had filed for divorce for “things not working out as planned,” the tabloids speculated that the entire marriage was a publicity stunt and a scam to make money. While Kim denies this, it’s no doubt that the failed 72-day marriage brought in a huge payday for Kardashian, earning her more than $2 million. Either way, we’re pretty sure Kim learned to not “get caught up in the fairy tale” ever again.

Second time’s the charm, right? Well not in the case of Baywatch star Pamela Anderson and rocker Kid Rock. They first became engaged in 2002 after dating for about a year, but that ended when they split the following year. Then in 2006, it appeared that the two rekindled their romance when they had a marriage celebration on a yacht in St. Tropez celebrating their love. Anderson described it as “the best, most romantic wedding of all time.” Rock described their rekindled romance as if the two had never been apart. In August 2006, the two made their union legal in a Beverly Hills courthouse.

Unfortunately, the whirlwind romance only lasted so long. Rock and Anderson only remained married for 4 months, and in November both filed for divorce due to “irreconcilable differences,” making this pairing one of the shortest celebrity marriages ever.

Moss and Armisen got married on October 25, 2009, and broke up eight months later.

Moss made the split official when she filed for divorce in early September 2010.

The Oscar-winning actress and the country-music heartthrob pair exchanged simple vows in a sunset ceremony on St. John in the Virgin Islands before just 35 close family and friends—not a single paparazzo or celebrity attendee in sight.

Zellweger and the country star tied the knot in May 2005, then annulled the union just four months later, citing “fraud,” leading to speculation about Chesney’s sexuality. The Oscar winner later released a statement noting that the term “fraud.”

Judd met Jennifer Lopez in Spain in late 2000 when he was hired to direct her music video for “Love Don’t Cost a Thing”. He composed the song, “Alive”, which was selected as the theme song for the movie Enough. Lopez and Judd were engaged in 2001, only 3 months after her Puffy breakup, and married later that year.

For her most lavish and formal wedding, J.Lo chose a Chantilly lace gown by Valentino. The two married on September 29, 2001. The couple would announce their amicable divorce in 2002.

Cooper and TV star Espositio got married in December 2006. Shortly after, they filed for divorce in May 2007.

Thankfully for both parties, it was a mutual decision.

Murphy and Edmonds married on New Year’s Day 2008 on a private island off Bora Bora. But the couple’s marriage got off to a rocky start even on their honeymoon.

After two weeks, the two announced that they were splitting and that their marriage was only a “symbolic union.” It was not legally binding in the US.

During their courtship, Taylor graduated from high school and made Father of the Bride. They wed on May 6, 1950, with 3,000 fans outside the Church of the Good Shepherd in Beverly Hills and 600 guests — columnists, hotel and Hollywood execs, a bevy of stars — inside.

Milking the nuptials for the simultaneously released Father, MGM picked up the tab, including $3,500 for its star’s curve-conscious gown. The movie star told a Santa Monica, California court that her first husband had been ”indifferent to me and used abusive language,” won a divorce on grounds of mental cruelty, refused alimony, and took back her maiden name: Elizabeth Taylor.

When they met in January 1975, it was a tumultuous and transitional time for both the glamorous pop star and the hard-partying rocker. Cher was in the midst of a messy divorce and custody battle with first husband Sonny Bono, after walking away from their hit CBS show The Sonny and Cher Comedy Hour the year before; Allman was fighting an increasingly destructive drug habit.

On June 30, 1975, just three days after her divorce from Bono was finalized, Cher, then 29, and Allman, then 27, jetted off to Las Vegas to get hitched. Nine days later, the raven-haired beauty filed to dissolve the union, after becoming overwhelmed by Allman’s heroin and alcohol abuse.

In January 2004, Spears married childhood friend Jason Allen Alexander at A Little White Wedding Chapel in Las Vegas, Nevada. At approximately 5 a.m., Spears and Alexander return to the chapel, where they shell out $70 for a seven-minute ceremony.

Spears wedding outfit consists of a baseball cap and torn jeans. The wedding march is played from a boombox as the bellman walks the bride down the aisle. The marriage was annulled 55 hours later. It followed a petition to the court that stated that Spears “lacked understanding of her actions.”

The couple first met in 1998, shortly after Electra’s mother had passed away from a fatal brain tumor. She admitted she went into self-destructive behavior.

Rodman married Baywatch beauty Carmen Electra in a 7 a.m. Las Vegas ceremony in 1998. This news turned a few heads. Their relationship was very passionate. His publicist questioned the legality of the marriage, saying Rodman may have been “deeply intoxicated” at the time.

Doherty was one of the stars of the original Beverly Hills: 90210 at the time, while Hamilton, an actor, was best known as the son of uber-tan George Hamilton.

They wed in September 1993, but called it quits, citing irreconcilable differences. A month later, Doherty’s character on 90210 was history as well, having been written out of the series at the end of the 1994 season.

The couple had been dating on and off since 2003, friends said after the wedding. Meister had reportedly proposed to Hilton earlier in the year and they had planned a wedding for the fall of 2004. But the energy of the weekend – no doubt fueled by the lemon drop shots Tara Reid had handed out on the private plane to Vegas – changed the young lovers’ minds. Todd had arrived on Saturday, the day after Nicky flew in Friday with Tara Reid and the gang. Shortly before midnight someone from the couple’s party called to reserve chapel time.

Shortly after midnight on August 15, 2004, a stretch limo pulled up to the Vegas Weddings wedding chapel in Las Vegas and a young couple arrived to say ‘I do.” Nicky Hilton, 20, and Todd Andrew Meister, 33, said their vows and lit a unity candle inside the chapel’s Indoor Garden Chapel in a ceremony that cost a few hundred dollars and pronounced them man and wife at 2:30 am. Hilton, who wore a thigh skimming aqua blue halter neck dress and a crystal wedding veil, and her blue jeans-wearing groom were joined by elder sister Paris, then 23, who wore a pink dress to serve as her bridesmaid.

The former Saturday Night Live cast member started dating Tutt in the spring of 2005 after meeting her at a birthday party. He proposed on Christmas Eve 2006 at her grandparents’ home in Gainesville, Texas. They were married June 28 in Yosemite Valley, California, and separated on Aug. 10 due to “irreconcilable differences,” court documents show.

A judge signed off on the divorce October 10, but the marriage doesn’t officially end until February 2009 – after the six-month waiting period from the original filing in August, according to L.A. Superior Court papers.

After only two weeks of marriage, Ali Landry and Mario Lopez were dunzo. The pair, who dated for six years, wed in 2004, but Mario’s alleged infidelity the day before and after their wedding.

“He’s cheated on her for several years, and she just found out last week,” a source close to the actress told People at the time. They never had a honeymoon, and he was out at a club last week without his wife.

Chad Michael Murray and Sophia Bush of One Tree Hill started dating back in 2005. The two played the beloved characters Brooke and Lucas (Brucas), who was one of the major shipped romances of the show.

Murray and Bush tied the knot in April 2005, when he was 23 and she was 22, and, sadly, five months later, Bush filed for an annulment of the union. This broke the hearts of both Brucas fans and fans of the actors being together IRL.

On-and-off again romance is usually an indication that the relationship probably isn’t headed in the best direction. Going through with it and getting married is probably not the best thing to do either, and will most likelylead to divorce and a whole bunch of regrets.

That’s exactly what happened when the daughter of the King of Rock and Roll, Lisa Marie Presley, and actor Nicolas Cage divorced after being married for a total of 107 days.

The couple began dating in 2001, and in 2002 debuted as a married couple after a secret wedding ceremony in Hawaii. The couple symbolically got hitched on the 25th anniversary of Elvis Presley’s death. Fast-forward to three months later, and Cage filed for divorce, citing “irreconcilable differences.” In the end, Presley’s response to the terminated nuptials was direct but honest: “We shouldn’t have been married in the first place.” Cage and Presley’s three-month run is one of the shortest marriages in Hollywood yet.

Drew Barrymore is no stranger to short-lived marriages. When she was just 19, Barrymore tied the knot with bar owner Jeremy Thomas, and the marriage quickly ended after one month.

Her next relationship didn’t last that long, either. In 2000, Barrymore and Green met on the set of Charlie’s Angels. Shortly after, the couple were often in the spotlight as a quirky, happy-go-lucky pair.

During their monthlong engagement, the couple continued to tease the public eye with their upcoming marriage. They even did a skit on Saturday Night Live that mimicked the real thing that everyone was waiting for. It turns out the marriage didn’t last nearly as long as the playful engagement did.

Relationships come and go, and if the shortest celebrity marriages teach us anything at all, it’s that celebrities can be just like us. They’re human, and sometimes can be wrong about “The One.”

Anderson’s marriage with Kid Rock was short, but her one with Rick Salomon was even shorter. On October 2007, the TV star married Salomon in Las Vegas.

Two months later, Anderson filed to have it dissolved on December 14. There were harsh words and accusations thrown around in the court, but their post-hearing statement summed up how every celebrity probably feels about such public cases.

Actor Carrey and actress Holly got hitched on September 23, 1996. After 10 months, Holly filed for divorce. She cited “irreconcilable differences.”

During an interview, the actress explained that they were quietly dating for years before getting married.