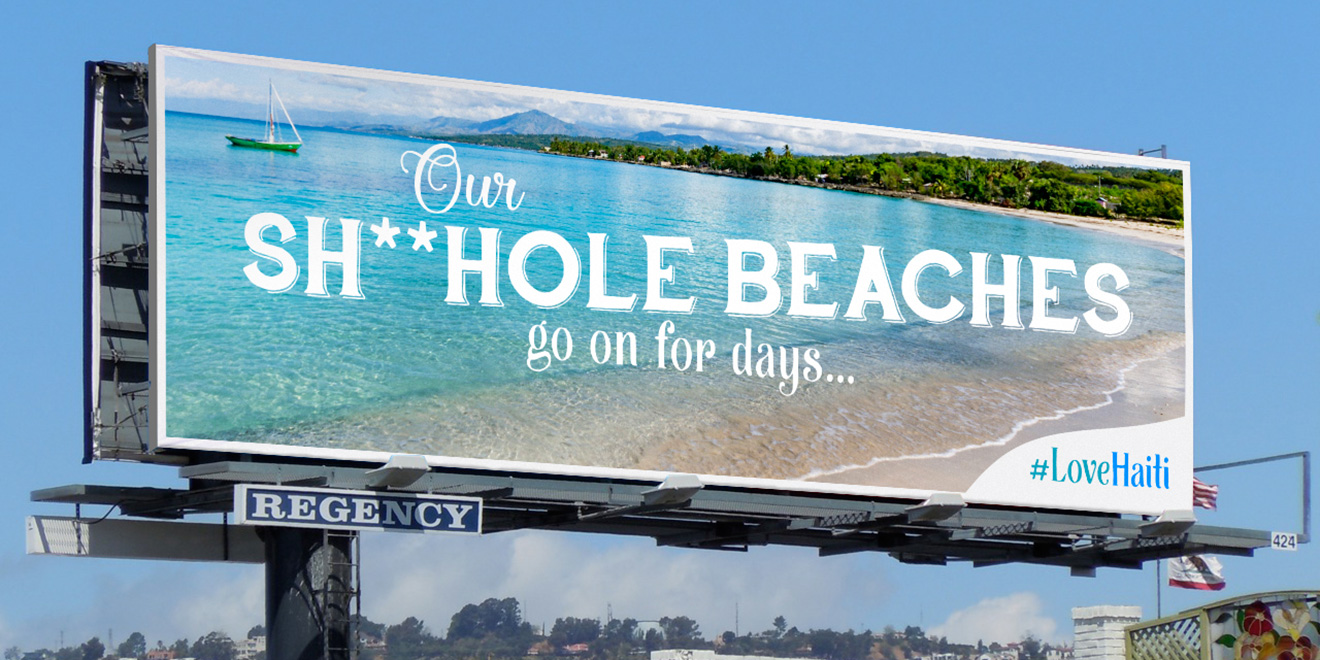 Over the past few weeks, there’s been a bit of debate over the word “shithole” – specifically, “shithole countries,” after President Donald Trump referred to Haiti and African countries as such.

According to Urban Dictionary, a “shithole” is defined as “[a] horrible place that is considered (by the majority of thinking members of homo sapiens) completely undesirable to live, work, or play in.” Based on that definition, a shithole country seems like the last place you’d want to spend a vacation. However, after a bit of exploration (and checking out Parkour Studio creative director Fabien Dodard’s GoFundMe campaign to run “shithole” themed ads for Haiti, as seen in the image above), we’ve decided that’s exactly what we’d like to do and we think you will, too. Here are the top 5 reasons why you should add shithole countries to your bucket list:

If you love nature – hiking, swimming in crystal clear lakes, and cooling off in fresh waterfalls – then El Salvador is one of the shithole countries for you.

Located in Central America and bordering Guatemala and Honduras, El Salvador is the smallest country in Central America and approximately the size of Massachusetts. Though small, it has several parks and areas for hiking. It is home to The Santa Ana Volcano (vulcan Llamatepec), located in Cerro Verde National Park, which – at 7,850 feet – is the highest volcano in El Salvador. Still active, the top of this volcano offers beautiful panoramic views of the city below, as a beautiful turquoise lake that rests in the center of the crater.

Unfortunately, swimming is not allowed in the lake, though tempting it may be after a long hike. The hike to the top takes approximately 4 hours and is doable via guided or self-tour. It’s not terribly difficult, so okay for both beginners and experts.

The magnificent falls of Victoria Falls

Are the seven natural wonders of the world on your bucket list? If so, then Zambia or Zimbabwe is one of the shithole countries for you. The Zambezi River crosses the border of both African countries and its waters descend 355 feet down, creating Victoria Falls or, Mosi-oa-Tunya, which is its local name and means “The Smoke That Thunders.” Both names are presently used.

The largest waterfall in the world, the spray from Victoria Falls can be seen from over 30 miles away, and the booming noises can be heard from more than 25 miles away. At the peak of rainy season, more than 500 million cubic meters of water plummet per minute into the gorge, over a width of 1 mile, and into a gorge more than 330 feet below.

Are you a salt fiend, and always wanted to know more about its origins? If so, Africa’s Namibia is one of the shithole countries for you. The Etosha Pan sits in northern Namibia in Etosha National Park and covers nearly 2,000 miles. The largest expanse of salt in Africa, it is a vast and barren expanse that glitters green in the dry season and can even be viewed from space.

The Etosha pan was discovered in 1851. Evidence suggests that the Kunene River formerly flowed into this pan and formed a large lake. When the river later changed its course and flowed westward into the Atlantic Ocean, the lake evaporated and the salt pan was formed.

In particularly rainy times, parts of the pan form pools of rainwater and draw thousands of migrating flamingos. The pan then becomes a breeding ground for flamingos. Additionally, as the surrounding savanna is home to a variety of animals, large numbers of zebra, wildebeests, rhinoceroses, elephants, lions, leopards, and giraffe’s visit the pan when there is water.

Love wine? Does the sound of vineyards set against granite mountains – some with sea views – sound like heaven to you? Or, does a day at the beach followed by an evening of wine tasting sound like the ideal day? If so, then Cape Town, South Africa is one of the shithole countries for you. Specifically, the vineyards in Stellenbosch. Simply put, Stellenbosch is to Cape Town what Napa is to California.

The cultivation of grapes in South Africa began in the 1600’s, and in the centuries following, Cape Town became the largest winemaking region in South Africa. The best wines (ie, those with the highest ratings) are primarily from vineyards on the alluvial fans of the granite mountains, which are estimated to be 600 million years old. The wines are often said to have subtle mineral notes, which experts believe derive from decomposed granite in the soil. Somerset West (famous for its Bordeaux blends) is a particularly spectacular area, with the ocean on one side, and mountains on the other.

One of Haiti’s many unspoiled beaches

Love white sand beaches, clear turquoise waters, and miles and miles of sand? Then Haiti is one of the shithole countries for you. Sharing the island of Hispaliola with the Dominican Republic, Haiti’s beaches are unspoiled, uncrowded, and some appear as though they’ve never been touched by humankind.

A few of our favorite beaches in Haiti include:

The size of a small city block, Ils-a-Rat was named by Columbus and is a small island off of Haiti’s northern coast. The epitome of Caribbean paradise, Ils-a-Rat offers rich vegetation, colorful coral reefs, and blue-green waters. It makes for a perfect snorkeling spot.

Located in Northern Haiti, Chouchou Bay is surrounded by lush green mountains. A relatively quiet and secluded spot, it is perfect for those seeking a bit of tranquility.

One of Parkour Studio’s proposed ads for Haiti

One of Haiti’s satellite islands, Ile a Vache (or, “Cow Island”) is located approximately 7 miles off of Haiti’s southwest peninsula and is the epitome of unspoiled beauty. Turquoise waters, white sand, and no crowds? It’s no wonder CNN rated it one of The World’s Top 100 Beaches.

While President Trump’s comments provoked outrage across the world, one creative agency, Parkour Studios, had a different approach: use Trump’s words to raise awareness of the beauty of these countries (in this case, Haiti) in a #LoveHaiti campaign.

#LoveHaiti: Parkour Studios campaign to raise awareness of all that is good in Haiti

As Parkour Studios’ #LoveHaiti campaign illustrates, Haiti is an absolutely stunning country and no wonder it’s coined “the pearl of the Antilles.”

We hope that these images help inspire you to plan your next trip – and, we hope you realize that in no way do we think of any of these countries as “shitholes” and we sincerely hope you don’t either.