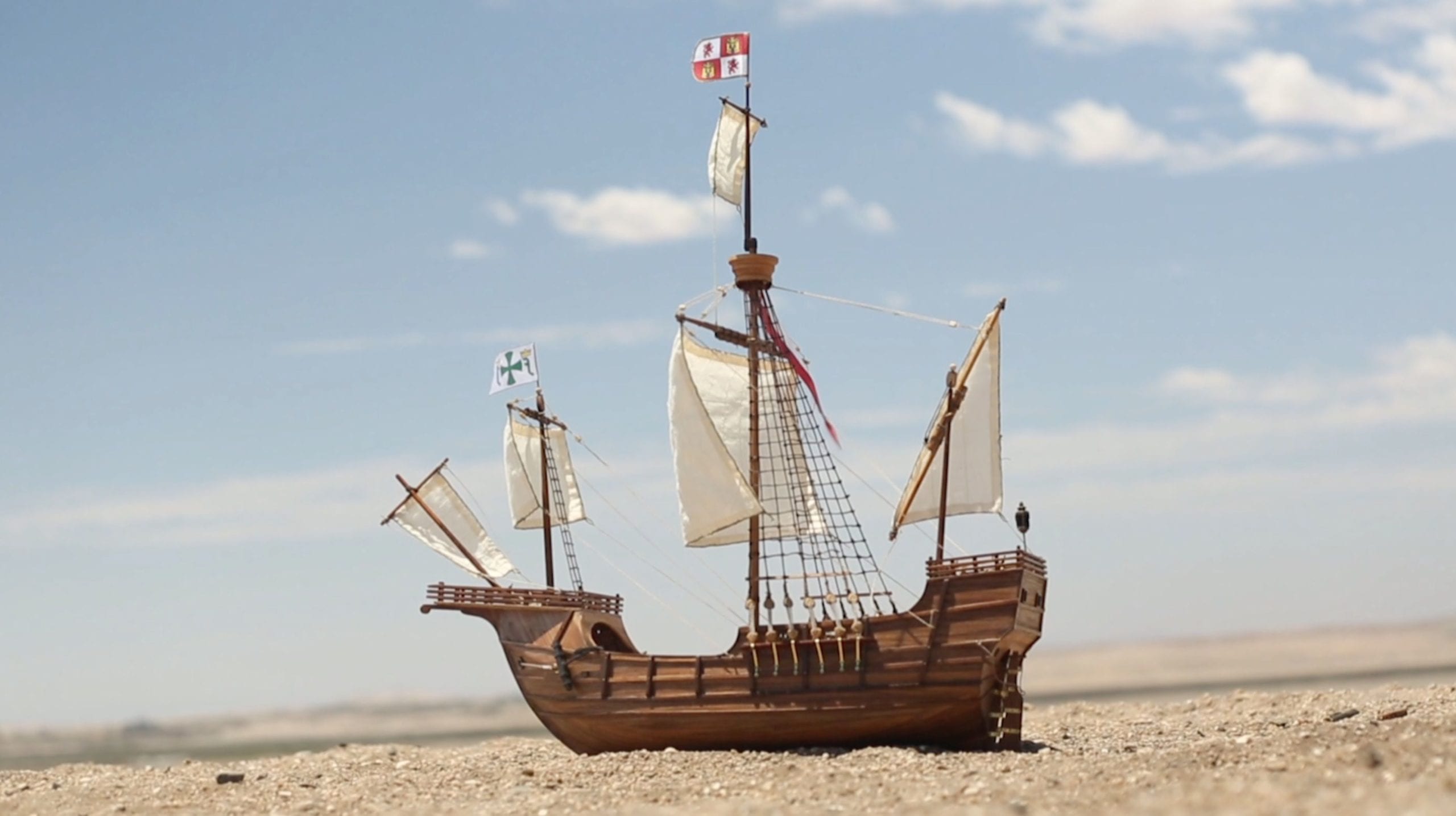 When experts started digging and excavating an unusual rock in the Namibian desert, they had no idea what they were about to uncover. They would soon discover a link to the past that was thought to be lost forever.

However, what strange thing was discovered in such a remote place?

A Ship In The Middle Of The Desert

In 1908 a German prospector discovered diamonds in an area of the Namibian Desert that would later be known as “The Forbidden Territory”. It wasn’t long before many other Germans poured into the area.

However, this diamond rush would soon uncover something else.

A Different Kind of Treasure

No one knew that a ship had also visited that area almost 500 years earlier, in the 16th century. Once they discovered this, archeologists from all over realized the potential importance of this find, or so they thought.

None of them realized just how special this shipwreck truly was.

The Sand Hid An Ancient Relic

However, neither they nor the original prospector could have known what a treasure truly lay under the sands.

This also meant that they had to stop mining for diamonds.

A Perfect Half Of Rock

It was almost one hundred years after the area was first discovered by the prospector when the miners stumbled across something that had been hidden for 500 years. A miner had stumbled across what appeared to be half of a perfectly round sphere.

The man picked up the sphere and realized that he was, in fact, looking at a copper ingot! He and his colleagues soon came across more such ingots, all marked with some kind of trident symbol.

However, that was merely the beginning.

The First Signs Of Treasure

The copper ingot was only the first part of the ancient treasure. The team kept on digging and soon realized that they were looking at a shipwreck. That was when the archaeologists took over and began to work on the area.

They couldn’t believe their luck as they uncovered the incredible find.

According to the experts, the copper ingots were most likely traded for spices in the Indies during the 16th century. However, the biggest enigma was not the cargo but how the ship had ended up in the middle of the desert.

What they discovered was mindblowing.

The Mark Belonged To Anton Fugger

Later, the miners were told that this was the symbol of Anton Fugger, one of the wealthiest financiers from Renaissance Europe. And yet, the mystery was only getting deeper.

Together with the archaeology team, they had to continue digging!

They Used A Bulldozer

The miners had no idea that the sand would hide other things than diamonds, so they used bulldozers on the site.

The discoveries were just starting to pile up.

What Did They Find?

Workers discovered pieces of wood, pipes, metal, and even tools that would be used on a ship.

Then Dr. Dieter Noli received a call from the Namdeb Diamond Corporation that day, a call that would make any archeologist happier than ever…

A Shipwreck And Its Treasure

“It just looked like a disturbed beach, but lying on it were bits and pieces,” recalled Dr. Noli, who is the chief archeologist. His first thought was: “Oh, no no, this is definitely a shipwreck.” But what makes this ship more special than the others?

Just wait until you see all the treasures they discovered…

Could This Be The Lost Ship?

Notice the small doodled ship on the bottom left? It was known a ship from a fleet was sunken, but nobody knew where it was lost and what happened to the crew! Was this the ship? Records say this vessel hid an immense treasure.

Imagine all the loot from a sunken vessel being washed away on the shore that is filled with diamonds! The archaeologist and his team begun their work and uncovered a 500-year-old musket and elephant tusks.

But that was only the beginning!

The Most Significant Shipwreck To Be Discovered

Archaeologists believe that this discovery is essential and that the oldest shipwreck ever to be found on the sub-Saharan African coast is also among the most significant shipwrecks ever found. The miners now helped to work on the site, uncovering astrological tools, compasses, swords, canons, and a time capsule.

Then, they spotted something else…

Could It Be the Lost Ship, The Bom Jesus?

Sometime around the time when this vessel got stranded on the African coast, a Portuguese ship that was going to India was never seen making its way beyond the Southern Atlantic. It was named The Bom Jesus – “The Good Jesus.”

Here’s why this ship could be the lost one and why it’s so important.

In the rare 16th-century book “Memorias Das Armadas,” The Bom Jesus had a cargo of gold and other precious items.

Historians dated the ship to between 1525 and 1538 and only knew that it was lost. Could this be it?

The secrets of this shipwreck would soon be unveiled thanks to an incredible crew that made sure the relics were safely loaded and transported to labs where their age was going to be tested. Archaeologist Bruno Werz was making sure this piece of wood would safely be placed in a tank of freshwater for preservation.

His work was just beginning and he was very excited.

Looking at the evidence at the site, Dr. Noli and his team realized that they were looking at the remains of The Bom Jesus!

Further investigations shed light on why it sunk… and later they even find that treasure!

It Hit A Rock and Then Leaned Over

In an interview, Dr. Noli explained how the ship met its end: strong storms sent the ship into a rock, it then leaned over and broke up, burying with it a chest filled with riches.

Read on to see how lucky archaeologists were to get to see the treasure that could have been easily washed to the bottom of the ocean!

The Heavy Structure Fell On The Treasure

A chest filled with loot fell from the captain’s cabin, right on the bottom of the sea. But what helped them stay there was that the heavy part of the ship fell right on top of the chest, protecting it from the waves!

Here’s what the chest contained!

A Haul of Gold, Ivory, Copper, and More!

The marine archaeologist Bruno Werz explained that the haul of gold in the chest, the tin and ivory were all in place thanks to the 44,000 pounds of copper ingots.

“If it hadn’t been for those copper ingots weighing everything down, there would be nothing left here to find.”

The entire shipwreck was excavated from a depth of 20 feet below sea level. The crew of miners and archaeologists were only a few feet away from the Atlantic Ocean which was only held by a retaining wall!

Their job is far from being over…

The ocean in that part of the Forbidden Zone was riddled with heavy storms that, in five centuries, along with the waves, could have washed away the entire shipwreck!

What will happen next with the relics found?

A Priceless Opportunity To Learn About Great Old Ships

Francisco Alves, who is the doyen of Portuguese maritime archaeologists and also the head of nautical archaeology (under the Ministry of Culture), explained that the discovery offers them a priceless opportunity…

To learn about the great old ships!

“This is only the second one ever excavated by archaeologists. All the others were plundered by treasure hunters.” This one is in safe hands!

There’s No Chance You Can Get On The Sperrgebiet

Considering the shipwreck is on the Sperrgebiet coast which is heavily guarded, no treasure hunter would dare get close to the precious remains.

But that not how the story ends!

Archaeologists are still researching whether there were survivors or not in that shipwreck, looking for more records of Portuguese men in Namibia.

It was so ironic for them to go on an adventure looking for treasure, and end up in a shipwreck on the very shore filled with priceless diamonds.

Looking for History Together

Learning About the Portuguese Trading Vessels

Thanks to the materials found on the Diamond Shipwreck, as it was named, researchers will need years to study everything.

They hope to learn more about the Portuguese trading vessels’ design, rigging, and evolution.

While the shipwreck did contain a lot of gold and ivory, even everyday objects like cooking items and sailing tools will help researchers learn more about the routine on board of the ship.

It will also shed light on what people would carry with them on long journeys, like this one, that never made it to its destination.