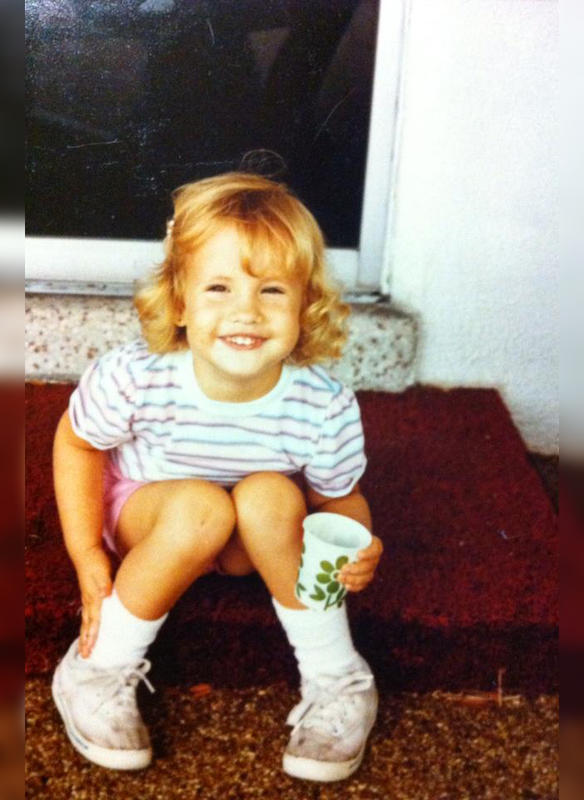 Amy Giberson went to preschool at St. Petersburg, Florida. That’s where she started a romance with a young boy. But as most preschool dating goes, there was handholding, playing around at recess, and making castles with Lego blocks.

But in the blink of an eye 30 years would pass and the two would completely forget about one another. But fate would bring them together once more.

Their teacher could still remember the bond that the two shared, “They had a blast with each other. It was a quiet, bashful romance. They liked each other from afar. It was a young love, like a sweet crush.”

But the two soon forgot about each other as they finished kindergarten and had to leave onto bigger and brighter things. But would they see each other again?

After many years Amy would go off to college and leave a lot of her life behind. She had many loves in her young adulthood but each would end in heartbreak.

She had been hurt too many times, but at least she had good friends to help her get over it every time.

Heart On Her Sleeve

“People would tell me, ‘Don’t be so open, Amy. Don’t trust so easily. But if I stopped doing that, it wouldn’t be me. It’s just absolutely nuts that I [was] the tragically misguided girl who was always let down.”

But after she turned 32 she would find that her unluck streak would end and nothing would be the same afterward.

Ready To Settle Down

Amy was sick and tired of waiting and wanted to start a family. She moved back to St. Petersburg where she grew up and sign up for a dating site, she had no idea what was coming.

Soon her profile would be found by a man named Justin Pounders, who had lived in the area his whole life.

The two seemed like they were meant to be. Justin was also nursing a heartbreak of his own.

Justin had moved out of town to be with his fiancee, Adrianne Roberts, but she sadly passed away after an awful attack. Justin moved back to his hometown for a fresh start.

After two years Justin finally felt ready to put himself out there again and signed up for a dating site. Then he found Amy’s profile.

He wondered what he would say to her when they finally got in touch. When he did, it changed his life forever.

“I saw her photo and for whatever reason was instantly drawn to her. She just had this great energy, you could tell. I can’t explain it, but I knew I had to get to know this girl.”

They spoke about random things and hit it off really well. They then excitedly planned the first day.

Justin asked Amy out for dinner at a classy restaurant. They met, and Amy felt an instant attraction to him.

“When we met up and we hugged, it was like I had known him my whole life,” she said. They talked for a whole 4 hours straight. Time passed in the blink of an eye as she looked at him from across the table. But how did Justin feel?

“Not even halfway through dinner I found myself shivering because I was so excited,” Amy reminisced. “I remember telling myself, ‘I’m going to be having dinner with this man for the rest of my life.’”

Justin felt equally as hopeful after the success of the first date. He even told the waiter to write the date on their desert. Their love began to blossom as they started meeting up nearly every day.

It was about two months into their relationship, when Justin made a very telling confession. “Justin casually mentioned he always liked my name because his first crush was a girl named Amy in preschool,” Amy said.

“I joked and said, ‘Well it wasn’t me, so I don’t want to hear about this Amy.’” But she wasn’t joking. In fact, she was a little jealous.

Amy had always been a confident and secure woman. She was independent, smart, loving and funny but when it came to men, she was also weary.

She had been hurt so many times before that she started to listen to the advice her friends had given her. To not trust men so easily. And now, she was putting that into practice.

She wasn’t feeling too secure in the genuine feelings Justin had for her since he told her about his fiance. She was heartbroken for him and her of course, but she was worried that perhaps she would never match up to the real love of his life who had tragically died.

Sometimes, she felt unsure as to whether he looked at her as second best. The thought hid in the back of her mind.

She did her best to talk herself out of her insecurities. After all, he was doing nothing wrong. She just wasn’t sure if she should get involved with a widow who was already deeply in love.

She was worried that he mightn’t be as emotionally available to her as she needed him to be. But then something happened that gave her all the reassurance she needed.

She started to pay closer attention to how Justin behaved around her after he told her about his fiance. She was looking for any behaviors in him that made her feel unwanted.

As the days passed, she was coming up empty, she really couldn’t fault him. He was attentive to her, affectionate and caring. But something did annoy her.

Randomly, he would talk about his first crush. The Amy he had met in kindergarten. He laughed as he reminisced on their sweet relationship.

When she asked if he knew where she was now, he looked sullen as he answered no. It was obvious to Amy that he was curious about her. Then something happened that changed everything.

After the third month of their relationship, Amy caught Justin touching a small scar on his forehead.

He told her it happened in preschool when he was horsing around on the monkey bars, he fell and cut his head. That was the moment that they discovered they had much more in common than they first realized.

While they knew that they had both grown up close by, they figured that they had never known each other as they didn’t know any of the same people.

But as it turned out, 30 years ago Justin went to the exact same preschool as Amy did. They tried to work out if they would have been there at the same time. They were.

This revelation led Amy to ask her mom to find the old photos from her preschool days. When she brought out the old group picture of the kindergarten class, Amy and Justin’s connected past became crystal clear.

Astonishingly, Amy and Justin were there 30 years ago. And not only in the same photo but sitting side by side!

“We asked our parents to dig up any preschool photos they had,” Amy said. “Justin’s mom found a photo of the two of us together and I just started crying, I was ecstatic. I was the Amy he had liked all those years ago! It was definitely meant to be.”

All her doubts of what he felt for her vanished. She was finally at peace, but was he?

A year had passed since they had met – for the second time! And now, Justin had a surprise up his sleeve. After making a special appearance on The View, while the couple were retelling their amazing story, Justin sprung into action.

Unexpectedly, the cameras were rolling at the preschool where they first met. There, a group of little students were holding up a sign that read, “Amy, will you marry me?”.

A year after the big engagement surprise, Amy and Justin became husband and wife. They married at the Mahaffey Theater in their beloved hometown, St. Petersburg.

It was a love that defied time and all other outside forces of life. It took them 30 years to unknowingly reunite. It was like the universe was guiding them to meet again.

Friends and family were gobsmacked at their incredible love story. And after word got out, so was anyone who heard it. But it wasn’t always an easy ride.

Justin and Amy knew they wanted to start a family immediately. That’s when they encountered their first heartbreak and challenge as a couple. It was a challenge that completely blindsided them.

“We had three early miscarriages,” Amy said. “I would test positive and then lose it.” It was a really hard time for them. But soon, their fate would change.

When their son Conrad was born, Amy remembers how they both “cried and held him close.” Now, she looks back at everything that had happened and thinks of the impossible chances that led them back together.

“The stars really had to align for everything to happen,” Amy said. “Everything that transpired in our lives, us coming back together and making this beautiful little person, it’s all very surreal”.

“For Conrad Pounders to exist, it’s been a long journey, but it does feel like everything has come full circle.” A truth stranger than fiction!