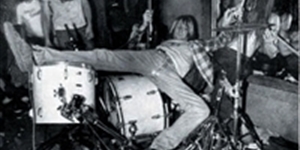 All good things must come to an end. And sometimes that end is a giant, fiery explosion – shrapnel everywhere, plenty of casualties, and no apparent way to go on. Yet out of the ashes of their bands’ demise, these five musicians managed to pull themselves up and go on to make even more incredible music.

Unless you lived under a rock the past 50 years, you know who The Beatles are – and how important they were to modern rock music. You know the final rooftop concert, the subsequent disbandment, and resulting feuds between McCartney and Lennon. Sure, they all went on to solo careers (Harrison’s being the most poignant) but the test of time has honoured Sir Paul McCartney with being the sole phoenix to rise out of the ashes of the amazing blaze of glory that was The Beatles. He has even been knighted, and is probably the most famous contemporary musician of all time. What else is there to say?

The disbandment of The Smiths was exceptionally hate-filled. Morrissey has stated in quite graphic imagery his refusal to reunite The Smiths. It’s okay, though; Moz’s career post-Smiths has been quite good. He is adept at turning grief into amazing, relatable music. There is a convention dedicated to him in Los Angeles attended exclusively by the Latino population, who relate to Moz’s songs about isolation and separation. He has had several wildly successfully albums, music journalists flock to him, and he has a die-hard fan base. What more does he need?

N*Sync was the most popular boy band in America (sorry, Backstreet Boys). Nowadays, none of the members have much notoriety in the pop culture world of 2013… except for Justin Timberlake. Once the world realized that boy bands are really dumb, JT managed to resurrect his career. He released some undeniably catchy songs (“Brining Sexy Back”) and starred in some major motion pictures (“The Social Network”). Now he’s on tour with Jay Z (another pop culture mogul and favourite). Though pop culture will never let him forget his N*Sync days, he’s sure come along way.

In the midst of boy band mania, Destiny’s Child was making waves and providing all the ladies (single or not) with a group to emulate, not to lust after. They formally disbanded in 2004, though the end was a slow one coming, after a three-year hiatus as early as 2000. Beyoncé had always been the ‘umph’ of the group, with the most powerful voice and the most stage presence. She soon matured as an artist, refusing to be defined by the music she made with Destiny’s Child, and was able to find a place in the pop culture world. Now, Beyoncé hangs out with the Obamas! If you need more proof of her cultural solvency, she has an entire “legacy” section on her Wikipedia page.

Cobain’s suicide was the shot heard around the musical world, and it left two very shattered people in its wake. Bassist Krist Novoselic and drummer Dave Grohol were left to pick up the pieces of not only their careers, but also their lives. Grohl was expected to simply roll over and fade into obscurity. Instead, he released Foo Fighters eponymous album, and played every instrument. Once “The Color” and “The Shape” were released, the musical world was forced to recognize that Grohl wasn’t about to disappear. Since, Grohl has released dozens of albums, played with the likes of Sir Paul McCartney, filmed a documentary on Sound City, and hates Nickelback – what’s not to love about him? He’s the nicest guy in rock ‘n’ roll, sort of, and is an undeniably amazing musician, lyricist, and director.