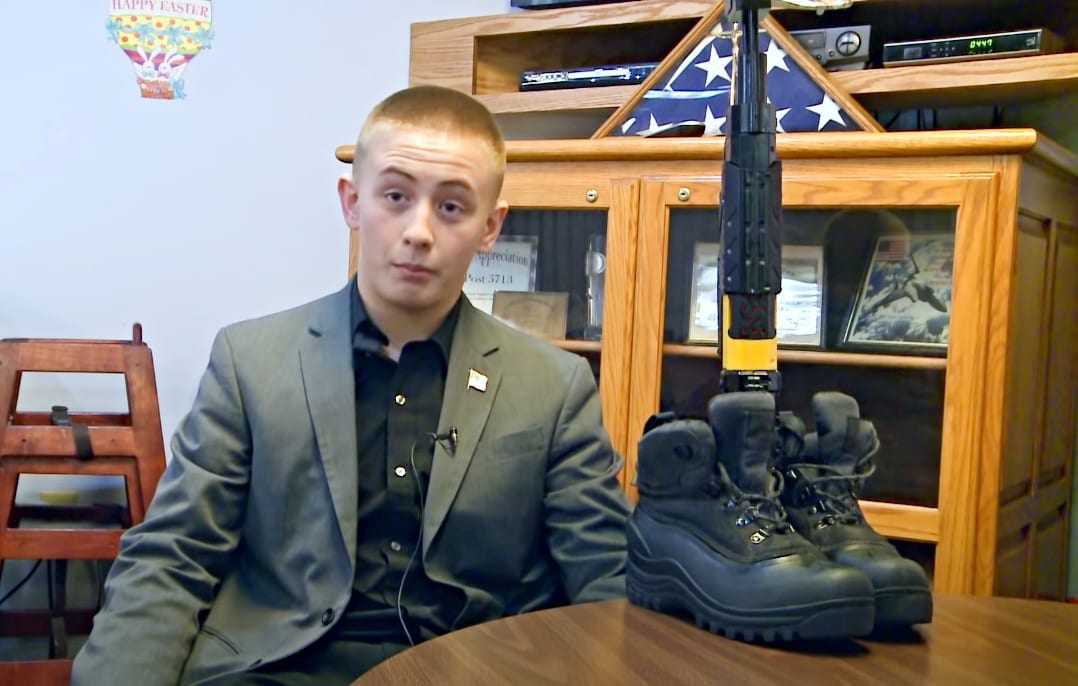 A middle school student from Celina caused quite a stir recently with his history project. His project not only caused a stir but also earn him a three-day-long suspension from school. However, this suspension has raised quite a few questions.

Tyler Carlin is an eighth-grader who was on the way to hand in his history project when things took a turn. Tyler’s history teacher had asked his students to build a veterans memorial as a project. While on his way to hand it in he was called to the principal’s office.

With the help of his dad, Chris, Tyler had built a replica of what’s known as a battlefield cross. Tyler painted a NERF gun black before he zip-tied it facing downward between a black pair of boots.

Once he had positioned the gun and the boots, Tyler placed a helmet on top of the toy rifle. The real version of this monument is used when a soldier is killed in action. According to Tyler, his history teacher, Ryan Spriggs, had given him permission to create the project.

Once he reached the principal’s office, Tyler discovered that he was suspended. According to the family’s attorney, the reason for the suspension was stated as disruption and bringing an item the resembled a dangerous weapon to school.

Officials at the school determined that there was no threat and had decided to allow him to attend the rest of his school day. However, the officials changed their decision and listed the reason for his suspension as “insubordination” instead.

According to Chris Carlin, Tyler’s dad, the fact that he had painted the gun black was part of the problem. If he hadn’t painted the NERF gun black, there would not have been any kind of problem. The district attorney has refrained from comment.

Union officials were preparing a statement but it hadn’t been released by press time. According to Carl Huber, the board president, the school board is not legally allowed to answer any questions on the subject without the Carlin family’s permission.

“We would love to respond to this. We have sent a request allowing us to respond. We cannot say anything without their permission,” Huber stated. Janice Holdheide, a Celina alumna, has stated that she fully supports the student’s intentions.

“I’m a 2000 graduate of Celina High School, served 12 years in the U.S. Army and served two combat tours in Iraq. I’m here to speak up for the young man in Celina Junior High School who was suspended and disciplined for choosing to honor the men and women …”

Huber interrupted her, however, saying she “could not talk about that particular incident.” “I appreciate you not giving me any time. That speaks volumes of the school board,” Holdheide replied.

Superintendent Ken Schmiesing has said the district supports veterans and their families, but student conduct is governed by rules and provisions of the student code of conduct, and the board requires all students to comply.

“Respect for the rights of others, consideration of their privileges and cooperative citizenship is expected of all members of the school community,” Schmiesing had stated in a news release. “The board has zero-tolerance of threatening, disruptive, insubordinate or inappropriate behavior by its students and enforces the student code of conduct fairly and even-handedly.”

Board members on Monday met with CEA members in an executive session to discuss the incident, but no action was taken after emerging about 30 minutes later. Also during Monday’s meeting, board members approved the retirements of kindergarten teachers Barbara Walls after 36 years of service and Barbara Faller after 35 years of service.