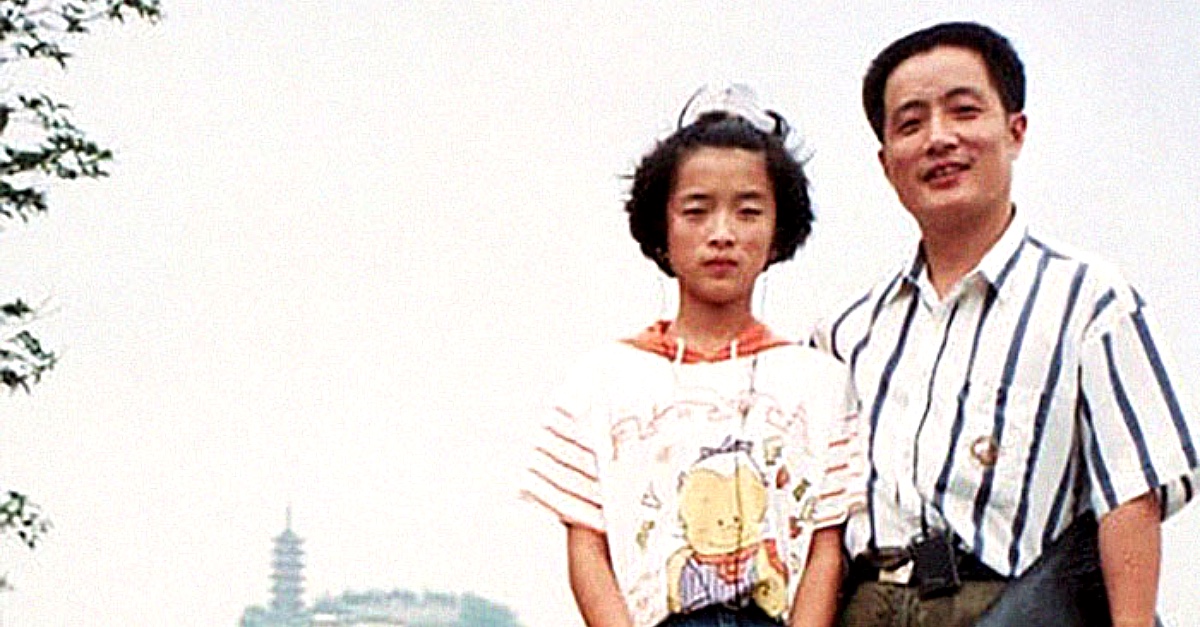 The man shared that she managed to convince them to still take the photo. “We took the photo even and we made it into the frame this time. Our daughter wasn’t around but it still felt like she was there.”

The family had been taking family photos by the lake for 19 years. Although they had already made it to an impressive two decades, their tradition had only just begun.

Weekend By The Lake

Hua Yunqing had taken his family to China’s eastern Jiangsu province and the lake there in Zhenjiang. It had been his first time taking them there to enjoy the weekend with his beautiful family.

It was summer in 1980, and they were having a splendid time. Hua asked his wife to take a photo of him and his daughter, Hua Hua, who was one year old at the time. Little did he know he was starting the perfect time capsule ever.

Apple Of His Eye

Hua was twenty-seven when his daughter was born. He had grown up a hardworking man and was lucky enough to meet his wife, who was able to support him through life’s challenging times.

His life was more than perfect because of Hua Hua. She was the apple of her dad’s eye, and when she turned one, her dad decided to take her and his wife to the lake. And so was the beginning of their family tradition.

Hua had a special place in his heart for Zhenjiang lake. He was born in the Jiangsu province and grew up in the lake’s beautiful and shining water.

His daughter was a younger version of himself whom he loved dearly, and he wanted to cherish every moment with her. He would never have thought that a simple photo taken at the lake would become a big family custom.

The photo where Hua posed next to little Hua Hua, who held tight to her father’s pants with her tiny fingers, was the first of many captured moments.

The black and white photo captured the lake’s magical essence, making for a perfect image. What added even more meaning to this photo was that Hua encouraged photos to be taken for the next four decades.

Hua smiled when he said that his daughter looked beautiful in every photo. “I hadn’t thought of doing it again, but I wanted to repeat it the next year when I saw how she looked in the photo.”

That lone photo started a family tradition. Hua and his family visited the lake every summer, bringing blankets and a picnic basket. As the day wound down, they would snap a photo to remember the happy memories as a family. But this wouldn’t always be so happy…

The summer of 1998 changed everything. Hua continued visiting the lake with his family, but they were missing one person.

“She had started it all,” Hua explained. There was pain in his eyes when he explained how disbelieving he was that she wasn’t there anymore. He was looking at a photo of him and his wife, and Hua Hua was missing from the image.

She Made Them Proud

Hua Hua had been studying abroad when her family was on vacation and could not see her parents. Hua said he was proud of how hardworking she was and that this time most of all. He struggled to keep his tears at bay.

He said that Hua Hua had excelled academically since she was young and earned her spot in one of the most prestigious institutions in the world. They couldn’t help but be proud of their daughter. And despite her being away, she didn’t want their family tradition to die.

The man shared that she managed to convince them to still take the photo. “We took the photo even and we made it into the frame this time. Our daughter wasn’t around but it still felt like she was there.”

The family had been taking family photos by the lake for 19 years. Although they had already made it to an impressive two decades, their tradition had only just begun.

The Yunqing continued their tradition throughout the next decade. They’d spend their vacation in Zhenjiang every summer and seal their memories with a photo by the lake.

Little Hua Hua had grown into an intelligent and well-spoken twenty-year-old who wanted to start a family of her own. But she’d one day leave her dad in tears when she shared something with him.

Her View On Their Tradition

“She was visiting one afternoon when she pulled me to the side and very casually told me that when she had a family of her own, she’d take them to the lake as well,” said Hua.

His daughter wanted to continue the tradition, which brought Hua to the verge of tears. He was very lucky to have her as his daughter. “I didn’t know what I’d do if I ever lost her.”

Twenty-Five Years Down The Line

The next time Hua took his family to the lake, Hua Hua was a beautiful woman. Twenty-five years had passed since their first visit, and Hua knew the end was still far away.

Hua Hua had just received a massive promotion at work and was already engaged. To think that all this started when she was still learning to form words and walk. But although all these years had passed, one thing stayed the same.

Times had changed, and the environment around the lake was a testament to this. But the love and affection in Hua’s family were still going strong.

To make even matters better, Hua Hua still stood close to her dad before taking the photo the same way she did when she was one. She’d always held on to him, forming an endearing habit out of such a simple gesture. She had no idea everything was about to change.

Hua Hua’s dating life would change everything, given that it ended in a beautiful marriage and family. Hua Hua and her family accompanied their parents to the lake.

As the third decade continued counting, Hua Hua’s daughters would grow, changing in each photo their mom and grandpa took with them. But that isn’t the sweetest part of this story.

The Yunqing family still visits the lake in Zhenjiang despite forty years passing. Hua Hua’s first daughter, now a teenager, is the spitting image of her mom, with the same stellar qualities that make Hua Hua the great person she is.

Hua, in his sixties, hopes his grandkids will carry this tradition wherever they go. He prays that even if they move to different parts of the world, they’ll save a day out of their year to visit the lake and snap a photo. It’s the best way to freeze memories.