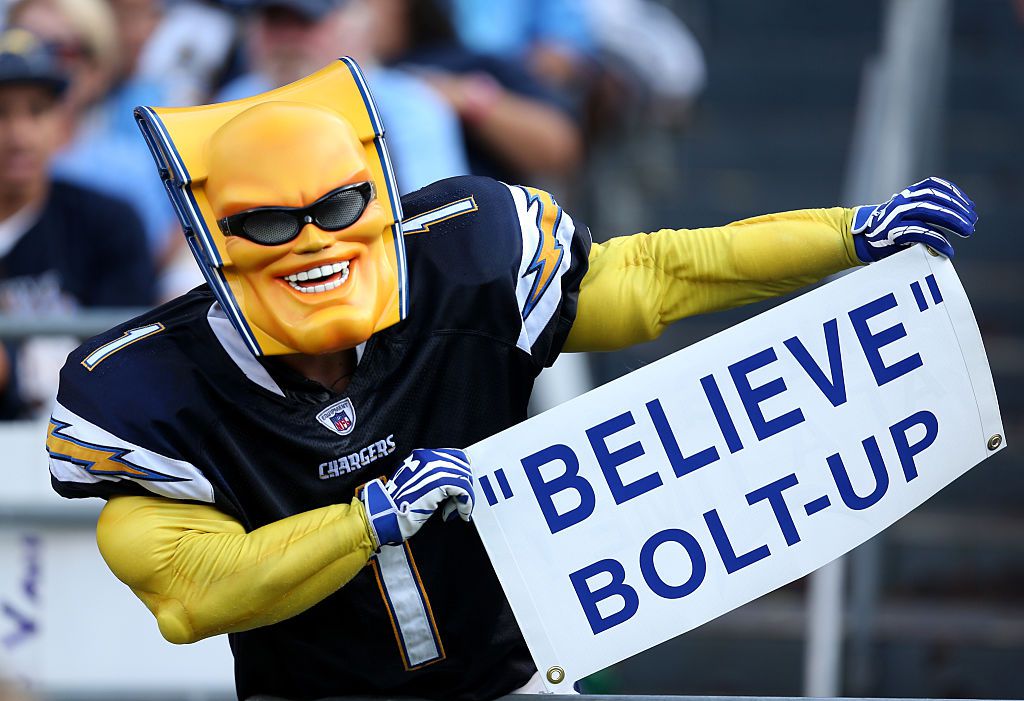 Being one of the worst mascots in sports history is clearly more embarrassing than running around in a costume at sports games as your profession.

While being a mascot may not be the most dignified of life callings, a man or woman can at least take pride when he or she is a cool mascot. The Phillie Phanatic probably walks with his head held high, even when his head isn’t shoved inside a giant, green dragon-thing’s head. The same can’t be said, however, for the poor souls on this list.

These are the top fifteen worst mascots in sports:

Also, no one knows why he isn’t at least some form of an actual manta ray. But rather than use the likeness of their actual team name, Tampa Bay elected to entertain their fans with the help of what looks like a blue sheepdog that sneezed so hard he exploded his own snout. And for that, they earned the fifth spot on this prestigious list.

He is the anthropomorphic buffalo mascot for the Thunder. His name is Rumble. He throws down monster slam-dunks. And his hair is finer than any other maiden’s in all the land. It makes absolutely no sense. It’s like the focus group that came up with Rumble wanted him to be tough in every manner, but they felt it was important he had the flowing locks of a Vidal Sassoon model. On top of that, they gave him the most innocent pair of giant doe eyes. He dribbles with the fierceness of Bambi and throws down with the strength of Farrah Fawcett. Rumble is a genuine walking paradox.

Although Rumble’s contradictions might have led him to be placed on the list of the worst mascots in sports.

However, that doesn’t dismiss the fact Rumble once won the Mascot of the Year award in 2009.

Surprisingly, Rumble won the Mascot of the Year six months after he debuted as the mascot for the Oklahoma City Thunder.

Rumble’s trademark entrance is the banging of a bass drum. The tale behind the story of Rumble is an old one. It is said according to the Oklahoma City Thunder website that a bison who was struck by lightning transformed into the super-powered bison known today as Rumble.

Part man. Part lightning bolt. All jerk. Bolt Man is the ill-conceived mascot of the San Diego Chargers and he’s about as pleasing to the eye as a Carrot Top boudoir shoot. This cartoonish abomination is essentially a frat boy lightning bolt; he’s wearing slick black sunglasses while sporting a massive, self-satisfied smile, and he’s completely jacked up on steroids. He’s definitely not on the list of Hall-of-Famers.

Basically, he’s the first mascot ever that definitely qualifies as a complete and total douche. Not only do you not want to root for Bolt Man, but you wouldn’t trust him alone with your daughter for a second.

This deserves a spot as one of the worsts mascots in the history of sports.

Sometimes mascots are weird and awkward. Sometimes they’re nonsensical. And sometimes they are just straight up terrifying. If you take one look at the Southern Illinois Saluki, you know that it falls squarely into the last category. A Saluki is actually an ancient Egyptian hunting dog, but this thing somehow turned out looking like a bloodthirsty, zombie poodle hell-bent on death and destruction. While kids tend to like most mascots, we’re willing to bet that no child has gotten within five feet of the Saluki’s cold eyes and razor-sharp teeth without immediately crapping their pants.

Just like the Dallas Cowboy’s Rowdy, The Southern Illinois University initially didn’t play under the name Saluki but rather used the name Maroon from 1913 to 1962 and adopted the name and mascot of “Saluki” in 1951.

One of the reasons why an ancient Egyptian dog was picked as the mascot was probably because Southern Illinois is actually known as Little Egypt.

Holy hell. What a creep. Have you seen this guy? There is just something so very unsettling about the mascot that has represented the Dallas Cowboys since 1996. It seems that whoever came up with Rowdy’s look was probably going for a happy, kid-friendly type of vibe, but something must have been lost in translation because what they wound up with was a face that falls less on the side of happy and more on the side of clinically insane. Based on the look in those eyes, as quickly as he’s taken a picture with your kid, Rowdy will smack the ice cream out of your kid’s hand and then revel in the sadness.

Before making it to the top of the list of worst mascots in sports, Rowdy was known and marketed by his creators under the name Big D. That sounds weird. But perhaps the Cowboys saw something that we just don’t. It was at their inauguration for Rowdy, that the name and appearance of the original Big D changed to what we know now as Rowdy, the worst mascot in history.

In 2016, there was a new mascot introduced to the Clippers team. The reviews of this mascot were mixed, but they were mostly negative.

Some sports critics claimed that Chuck looks like Toucan Sam, the Fruit Loops bird. The coach seemed to like it claiming the mascot fit the team and the city well, but we aren’t convinced of that.

The next mascot only was around for the 1984 season. Why you may ask? Well, at the time, the Giants were playing poorly. To boast spirits, the management decided to create the Crazy Crab. Fans were both confused and terrified every time they saw him.

He was so disliked that they decided to get rid of him after one season. In 2008, he appeared at a Giants game when they gave away Crazy Grab bobbleheads.

The Columbus Blue Jackets are a fairly new team in the NHL. Over the years, they have become better. Shortly after they started playing, they introduced their new mascot, Stinger. The PR team said that Stinger is a “Bug with an Attitude.”

He is supposed to symbolize the characterize the citizens of Columbus known for their hard work and pride for their team. Unfortunately, his scary eyes are haunting and his mean smile makes you want to run and hide. We hope that the Columbus community enjoys him!

In 1997, the Warriors introduced to Dub Nation, Thunder. He was a muscular mascot that had a thunder face. What made him super cool was his sunglasses. The fans liked him for his amazing acrobatics and how he could get anyone excited for the game.

After only 11 years on the team, Thunder the mascot was retired because of the new team the Oklahoma City Thunder.

In September 2018, the Philadelphia Flyers introduced Gritty was their new mascot. The internet and fans alike were horrified to learn that this mascot existed. The ridiculous orange fiend has crazy eyes, hips that move better than Sharika’s, and weird hand movements.

People recognize him all across America because he looks he will haunt you in your nightmares. It’s a confusing move by the Flyers, but Gritty is beloved by the entire city.

Before the new 76ers mascot came around, they started out with Hip Hop. He was a rabbit that gave the crowd a bunch of awesome acrobatic moves.

He was unliked though because his costume was ugly.

If you aren’t an Ohio State fan, you might be rolling your eyes every time you see this mascot run out on the field.

They were so unoriginal with their mascot that they made it a nut. Boring!

People do not like Burnie because he is too high energy and he looks weird.

Apparently, this guy is supposed to be a fireball. Now we are all sorts of confused!

What kind of name is Screech? Well, apparently this bird was introduced over 15 years ago.

Even though he has a terrible name, fans love to see him around the stadium!

Apparently, the marketing team was not thinking for this mascot. The poorly designed marlin looks like a clownfish!

But the sad thing is, the other mascots around the league probably laugh at him behind his back.

There they are, the not so proud members of the fraternity of horrendous mascots. The sad thing is that there were so many more candidates that this list could’ve easily been a top 25 (we’re looking at you, UC Santa Cruz’s Banana Slugs). If you’re truly convinced that we left some mess-of-a-mascot off of our list, just throw together a list of your own, and tell those guys, whose lives consist of dancing in a monkey suit, just how useless you really think they are.