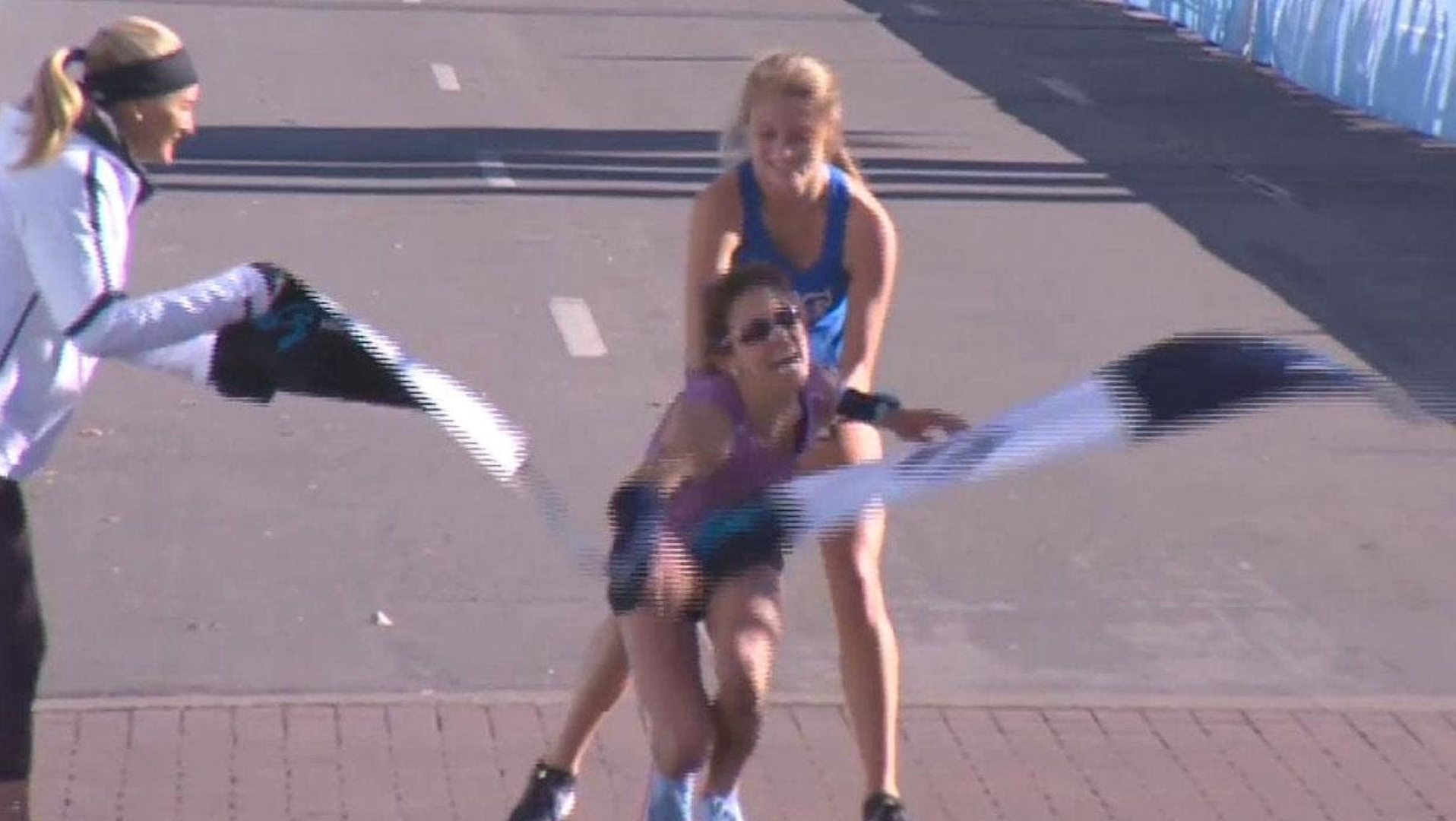 A Race For Her Life

She was running like it was a race for her life. Each percussive thud of her feet the only sound she heard, with her chest burning and the muscles in her legs singing, she struggled to propel herself forward.

Suddenly, in mid-air, her legs seized with a shudder. She tumbled down with a sickening thud. The crowd fell silent as the other girl came purposefully up behind her. A startled whisper went through the crowd: “What is she doing?”

When you’re a college freshman, negotiating career choices and degree options can be a minefield. But for Madeline Adams, it wasn’t hard to decide exactly what she wanted to do with her life. She wanted to run.

But her choices would be what led her to a terrifying moment on the track. As she lay there, prone and gasping, all eyes were on her. Then, the unthinkable happened.

The staff at Boston University had encouraged Madeline when it came to her athletic abilities. She had proven herself to them when she finished a 1500 meter race in less than 5 minutes, subsequently beating her previous record.

But beating her own record wasn’t enough. Madeline was determined to be the best runner they had ever seen. She had no idea what was to come.

When Madeline learned of the ACC Championship race, she immediately focused her eyes on the prize. She trained relentlessly for weeks. She lived and breathed for the race. Every morning, she would run on the university track, hoping that when the time came her muscles would be ready.

But what she didn’t know was that something would thwart her when the day arrived.

When Madeline was interviewed before the race, she felt unstoppable. After all, she had trained so hard to get here. When the announcer mentioned the notoriously difficult incline on the track, she wasn’t worried.

With a look of determination on her face, she lined up with the other girls from competing universities and waited for the signal. Her heart thudded in her ears and her muscles coiled. She was ready.

Suddenly, they were off and Madeline’s feet were already flying. She pumped her legs furiously to get ahead, but the other girls in the ACC Championship were just as determined to win as she was.

She quieted her mind of all the unwelcome thoughts, thoughts of losing. Finding a rhythm, she began to outrun them all.

There were cheers and whistles from the stands as Madeline broke away from the other runners. She felt more alive than she had ever felt in her life. And she was winning.

A tense moment passed when some of the others began to catch up to her, but she pushed on until they fell away from her peripheral vision. But the feeling wasn’t to last.

Coming Up From Behind

Madeline rounded a curve and lifted her eyes from the ground. She saw the finish line. In her mind, the race was done and dusted. They couldn’t stop her now.

But she didn’t know that Evie Tate, a competitor from Clemson University, was about to pull a move that would leave onlookers incredulous – and indeed, get herself disqualified.

Madeline readied herself for the final push – the push that would lead her to victory. The ground began to rise sharply and she felt her body resisting. She put her head down and threw her weight forward to overcome it.

The finish line was just meters away. But the day’s events were about to take a completely unexpected turn…

As if out of nowhere, Madeline’s muscles froze. Her thighs locked and she missed her footing. The spectators in the stands stopped cheering and fell completely silent. She came down hard on the track but was already scrabbling to get up before she hit the ground.

She only had a few seconds before she lost her lead. But she couldn’t move.

“All of a sudden, I get this wave that comes over me and my legs just truly gave out from underneath me. I had no control. I really don’t remember falling; I remember being on the ground and being like, ‘why am I on the ground? Get up,’” Madeline recalls.

Then, Evie Tate approached her.

To Help, Or Hinder?

With the other runners streaming past her, Evie inspected her opponent on the ground. The crowd whispered in alarm as she began to take Madeline’s arm, trying to lift her.

Evie and Rachel struggled until they managed to pull Madeline up. They slung her arms around their necks for support and began to hobble toward the finish line.

Even though it had cost them their places, they were determined to help Madeline finish the race. But their actions had an unexpected outcome.

Evie and Rachel decided that they had to do what was right. They had to help Madeline, even if she was their competitor. But their actions got them disqualified from the race. It was something that had never happened in the history of the sport before.

Nobody could believe it. And soon, the footage would go viral.

Her Body Gave Up

Madeline had underestimated the incline on the track. She had been doing so well when her body gave up on her.

Fatigue washed over her like a cold wave and her muscles gave in from the sheer exertion. She watched the other girls run past her in dismay, but she had never expected help to come from such an unlikely source.

Madeline was also disqualified from the race because she hadn’t finished it on her own. But she was surprised and grateful for the kindness that her competitors had displayed.

“The great part that comes out of this is there are two amazing girls that helped me, who are completely selfless and just amazing people with amazing character,” she said. But would they be rewarded?

The video of the unbelievable events at the race first appeared on the ACC official page. Just a few hours after it had been uploaded, it was quickly shared hundreds of times.

Evie was astounded to see that the video had over 50,000 views, and had no signs of slowing down. But her 15 minutes of fame wasn’t over yet.

The next day, Good Morning America reached out to Evie for an interview, which gained her even more recognition. The original video had now accumulated over two million views. People who commented on the footage praised her and Rachael for their amazing sportsmanship and said that more athletes should follow their example.

Others, however, were outraged that they were disqualified.

They Should Be Rewarded

Evie’s father was particularly furious that his daughter, and indeed Rachel, had been disqualified from the race for their good deed. He proposed that the two be awarded an ACC sportsmanship accolade for their selfless act.

And he wasn’t the only one to suggest it.

Among the people who were hailing the girls’ actions as nothing short of heroic was Madeline’s high school coach, Jack Reed. When he saw the footage, he had recognized his former pupil, Madeline, instantly.

He believed that they deserved an accolade because the two had chosen to help a competitor rather than benefit from her misfortune. But would they get it?

Soon after the incident, Evie and Rachel were named among the athletes who won the NCAA student-athlete-sportsmanship award for the year 2016/2017! And they deserved it, too. They had thrown away their own chance at winning the race to help someone they didn’t even know.

Just like Evie, Rachel was hailed a hero by her university, which recognized her role in helping Madeline finish the race that day. But this isn’t the first time we’ve seen such sportsmanship on the track.

Simon’s act showed us that there’s nothing more important in life than helping someone who is in need. Just like Evie and Rachel, he sacrificed his win to help a competitor out.

The Okpekpe Road Race is an annual event that takes place in Nigeria. World-class athletes flock to the 10 km event from all over the world to compete against other runners.

Invitations are extended to all military and para-military members, as well as CAA Member Federations. Simon had been training for months – which is why everyone watched in surprise when he threw his win away.

In 2018, he was a strong contender to be the first runner to win the race twice in the history of the Okpekpe Road Race. However, fate had other plans.

The race started and Simon was off like a lightning bolt. His feed pounded the track and, with his eye on the prize, he was quickly outrunning all his competitors.

With his heart racing and muscles singing, he was sure to leave the other runners in the dust and cross the line first. But then, he saw a commotion up ahead.

Simon looked around and saw a fellow Kenyan runner, Kenneth Kipkemoi, lose his footing and tumble to the ground. In a split second, Simon barely had time to react.

He didn’t even think twice before he stopped in his tracks. While the other runners sped right past him, Simon lifted his compatriot up and gently pulled him to the finish line.

Simon forfeited first place, as well as the record for being the first athlete to win two titles in the race’s seven-year history.

Instead of going for gold, he decided to stop and help his friend. In a show of extreme compassion and sportsmanship, Simon and Kenneth made it over the finish line in dead-last place. But what compelled Simon to do it?

“My dad told me one day, ‘When you’re walking and you meet a sick person on the road, help him,” Kenneth explained after the race.

“Do not leave him. So that was the first thing that came to my mind when I saw my friend on the ground.” But, unlike Evie and Rachel, Simon was rewarded for his good deed.

“This is what is called sportsmanship. Simon gave proper consideration for fairness, ethics, respect, and a sense of fellowship with his competitors,” race promoter Mike Itemuagbor said. “He is our hero, he is the hero of the seventh edition of the race.”

Although Simon had forfeited his medal, he wouldn’t leave empty-handed. local politicians stood up and took notice of Simon’s kind deed, and he was awarded $15,000 for his altruism.

“Simon may not have fulfilled his ambition of becoming the first athlete to win two Okpekpe titles since 2013 when we began this race but he came to Okpekpe this year, ran, and left as the hero,” Mike Itemuagbor said.

“He did not win any medals but he won hearts,” Mike added. The video of the event brought Simon even more fame when it went viral on social media platforms. So far, it’s amassed 43,000 views and counting.