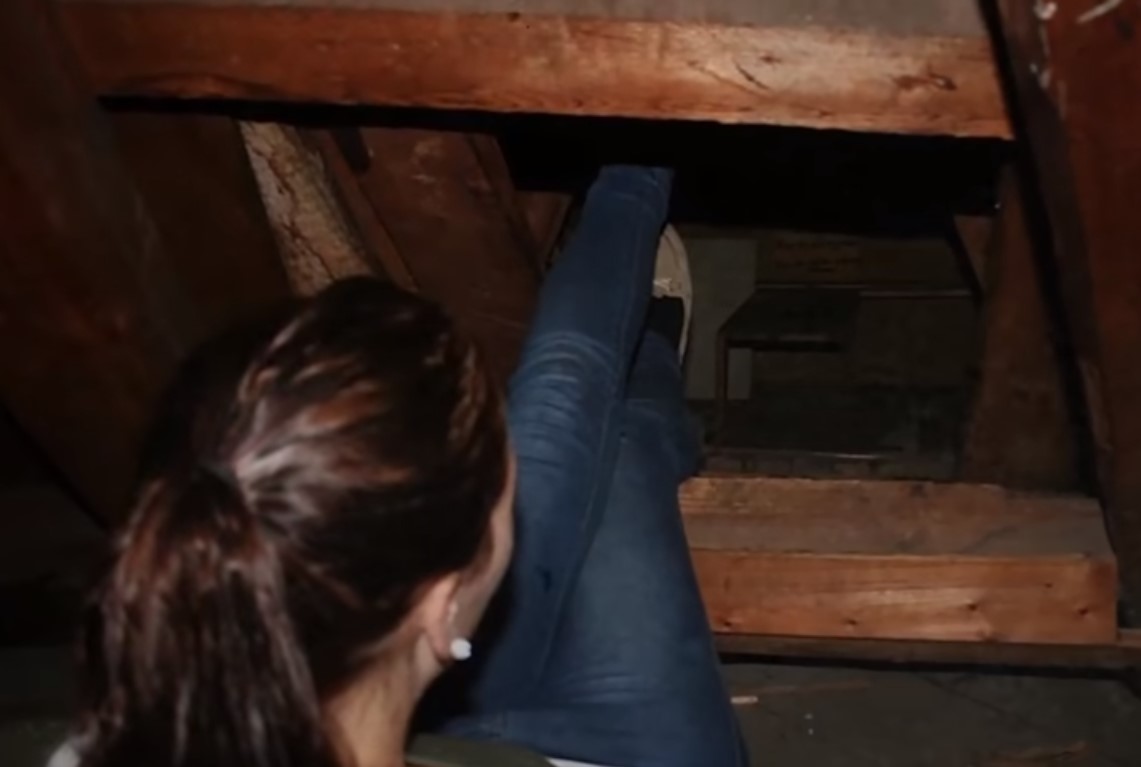 A group of Ohio State University students convinced themselves that their house was haunted by a ghost. The reality was a lot more chilling. After an extensive search, they discovered a room in the basement behind a door they had thought lead to a maintenance cupboard. Here they found a double bed, student textbooks, and photographs – all of which belonged to a housemate they never knew they had, called Jeremy.

The housemates quickly changed the locks and left a note for Jeremy informing him that he could no longer live there.

What other hidden rooms have people found in their homes?

Crawling into the tiny space, he found an ominous-looking locked door which concealed the entrance to a small room containing a briefcase and safe. The room behind the door contained a safe, briefcase and a stack of mysterious videotapes.

Inside these items were money, watches, and most terrifyingly, a series of videotapes, one of which was labeled ‘no no no no.’ The tapes were handed over to the police in a bid to solve the mystery.

A pair of house-hunters were freaked out when they stumbled across something weird in the basement. The potential buyers were looking around an unoccupied house. He went into the cellar and found ‘Joshua’s room.’ The bare brick walls were covered in scrawled messages, including a list of rules that will send shivers down your spine.

They include: “No watching Isaiah through the hole” and “No writing or drawing on the walls.” More scrawlings read: “Stop watching me.” They also noticed weird holes in the stairs – peepholes from Joshua’s basement room.

Many would expect castles to be packed full of hidden passageways and rooms. Singer Castle in New York takes the stereotype to a whole new level. Secluded on an island, the ancient home features a painting that can be tipped back so people can be spied on from a secret passageway. There are also spying grates on the walls and it has its own dungeon.

There are hidden rooms and passages around every corner at Singer Castle. Some of the castle’s paintings allow people to eavesdrop through on the other side.

A couple who had purchased a house in 2005 realized there was more to their new place than met the eye. Jason and Kerri Brown started to do renovations on their new home.

To their surprise discovered a secret passageway behind a bookcase. Inside they found a note saying ‘you found it!’ It went on to explain the real reason the previous occupants had left: the house’s black mold problem. Heeding the warning in the note, the Browns packed up their belongings and sued the broker who had sold them the house.

Noticing some unusual boards in the basement of his house, a man found a room he had never known about concealed in the house’s foundations. Inside, the space was lined with ammunition and some empty gun cases, leaving the man to wonder what had become of its owner.

There was even a grenade left behind, which was thankfully confirmed to be a dud.

Another student got a nasty surprise when he moved into a house in New Mexico purchased by his parents. At night he would hear banging noises coming from under the floorboards.

Investigating further, he found a hidden door on the floor of the pantry, leading to a hidden basement. Concealed beneath the floor was a desk, working lights and, creepily, a recently smoked cigarette. Thankfully the hidden space had been vacated and its inhabitant never returned.

The Farlas family spent three years wondering what lay under a strange metal grid in their home, before finally deciding to investigate. After a few drinks, they plucked up the courage to pull it up.

They discovered a mysterious brick room beneath their house. Underneath lay a stone room with what appeared to be a religious cross on the floor. A local history expert commented that the mystery room could have used as a hideaway for persecuted Catholics.

Bookcases are often used to conceal hidden rooms, but one anonymous family was not prepared for what they found behind theirs. The secret entrance in the parent’s bedroom revealed a spiral staircase. It lead to a room which had all the signs of someone living there. They found a room hidden behind their bookcase with some heart-stopping items inside.

Some sweet wrappers and items that had been taken from the house. Terrified, the owners fled the house and the police confirmed the house was later boarded up.

9. Door On The Floor

A man discovered a room under a door on the floor of his new apartment. It contained a bed and unusual graffiti. Plucking up the courage to see where it led, they found a stone room complete with a bed and walls lined with graffiti markings.

Part of the floor had been dug up, prompting him to ask whether something had been previously buried here.