What are the Best WiFi Extenders?  How can I get better wifi service in my home?  If you find your internet constantly buffering (or going out altogether), have dead zones the WiFi never seems to reach, or are unhappy with how long it takes to upload or download large files, you may want to invest in one of the best WiFi extenders to fix these problems. Whether you’ve read a lot of WiFi booster reviews or are at the beginning of your search for the best WiFi boosters, you may not know how to find the best one for you.

Advertising Disclosure
Top5.com has an advertising relationship with some of the offers included on this page. However, the rankings and listings of our reviews, tools and all other content are based on objective analysis. Top5.com does not always include all service companies or products available in the marketplace. Top5.com strives to keep its information accurate and up to date. The information in our reviews could be different from what you find when visiting a service provider or a specific product's website.
Editors' Choice

The eero is a mesh WiFi system that uses a tri-band network to broadcast your router signal to beacons spread throughout your home. This allows the system to use the full breadth of its 2.4GHz and 5GHz bands. Features include:

TheNETGEAR Orbi is more than just a WiFi booster. It’s the world’s first tri-band mesh system, so you can create one network with one name for your WiFi extender that will remain constant as you move throughout your home. Features include: 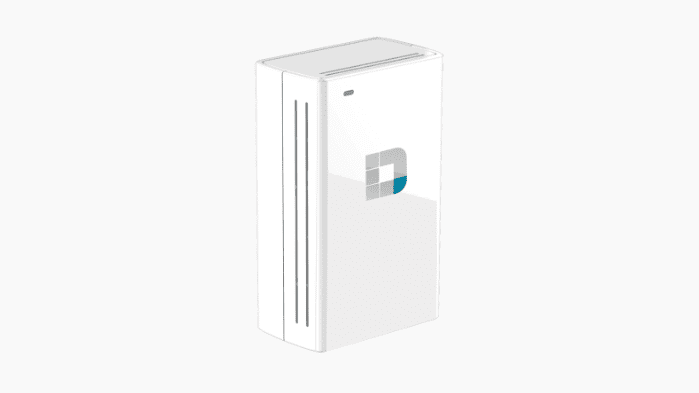 The D-Link DAP-1520 is perfect for non-techies looking for a simple way to extend their WiFi coverage throughout their home. Features include:

Google WiFi is a mesh system comprised of a router and extenders. It uses AC1200 technology. Features include:

The NETGEAR EX3800 is a mid-range WiFi extender that extends the range of your WiFi signal. It supports WiFi speeds up to 750 Mbps and is dual-band and compatible with Wireless-AC technology. Features include:

The eero isn’t just a WiFi extender. It’s a mesh system and is often called the Cadillac of WiFi extenders. Want to extend your WiFi? This is your best option.

While most WiFi extenders have just one unit, eero has three or more. One acts as a base WiFi router, and the others serve as beacons that receive and emit the wireless signal. Three eero units (one base and two beacons) are recommended for a home up to 4,000 square feet. Have a larger home? No problem – add more beacons. Read our eero review to learn more.

Similar to the Eero, the NETGEAR Orbi is a tri-band mesh system that helps boost WiFi throughout your home.

It contains two units: a router and a satellite. Both act as tri-band routers. Each unit has several ethernet and USB ports and one 2.4GHz Wi-Fi band and two 5GHz bands. In addition, the system can provide WiFi coverage for up to 5,000 square feet.

If you’re a die-hard follower of Google products and are in the market for a new WiFi extender, Google’s mesh system is the one for you.

Google’s system has multiple units that act as both a WiFi router and extender. The three pack is the most popular system and can cover up to 4,500 square feet. It’s a simple setup and does require a Google account and a smartphone. Our review has more information. 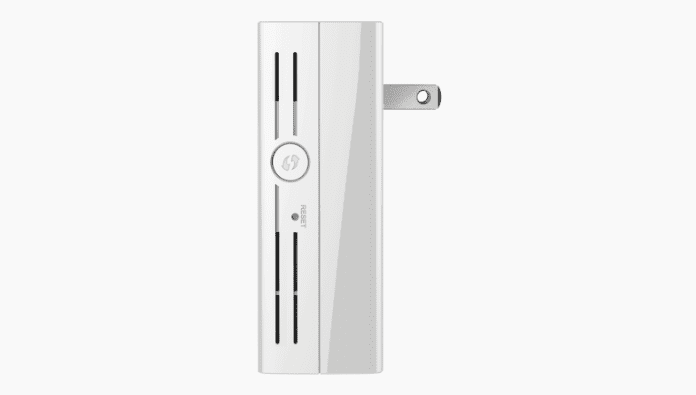 If you’re looking for a cheap, easy, basic WiFi extender, the D-Link DAP-1520 is it. It doesn’t have a lot of bells and whistles like ethernet ports, USB ports or audio inputs. Unlike a few of the WiFi extenders on our list, it isn’t a WiFi router and extender in one.

It’s a simple WiFi extender that takes your existing 11N or 11AC WiFi network and extends the wireless range farther than your router can do on its own. It’s also incredibly simple to set up. This is one of the best WiFi boosters if you’re looking for something simple. Read our D-Link review for more info.

This is one of the best WiFi boosters if you’re looking for a high-quality but affordable and basic extender. This WiFi extender is a mid-range booster than supports WiFi speeds up to 750 Mbps.

It is dual-band and compatible with Wireless-AC technology (the latest standard for wireless). It plugs directly into an electrical socket and is easy to configure. Read our NETGEAR EX3800 review for more details.

Why You Should Buy a WiFi Extender 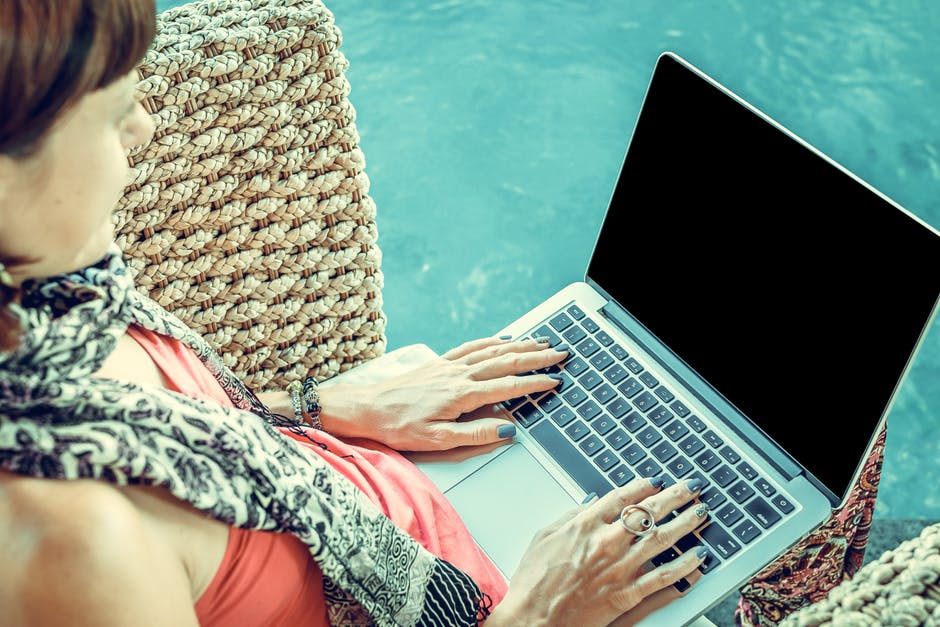 The truth is, not everyone needs a WiFi extender. If you live in an apartment, if you live alone, and if you rarely stream or download large files, you likely don’t need one.

How do you know if you need a WiFi Extender? We’ll start by asking you a few quick questions:

If you answered “yes” to even one of the above questions, you might want to invest in a WiFi extender. Investing in one of the best WiFi boosters could make a big difference in your online experience.

How a WiFi Extender Works 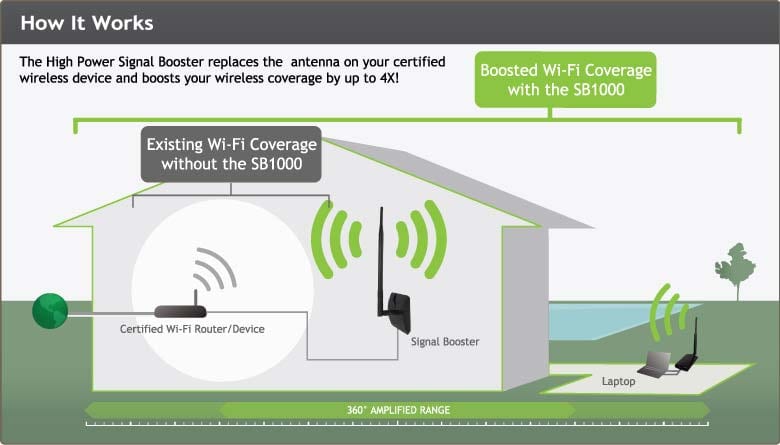 Simply put, a WiFi extender works by boosting your existing WiFi signal. It takes the WiFi signal emitted from your router, strengthens it, and then rebroadcasts it throughout your home.

The newly boosted signal is stronger than the original signal emitted by your router and thus can reach more areas of your home. It can reach new areas and provides a stronger connection to the already-existing areas of WiFi coverage. The best WiFi boosters can dramatically improve your existing connection.

How to Choose the Ideal WiFi Extender for Your Home 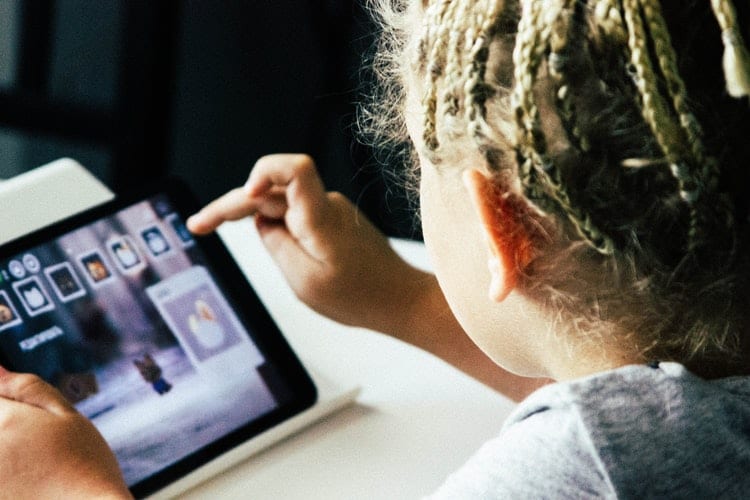 There are a lot of WiFi range extenders out there. Some are marketed as WiFi extenders, some as WiFi boosters, and others as WiFi mesh systems. All of these options promise better internet, so how do you know which is best for you? It all depends on your WiFi needs and the size of your home.

If you live in a modest sized home or apartment and are looking to speed up your WiFi and get rid of dead zones, a simple WiFi extender such as the D-Link or NETGEAR EX3800 will likely suffice.  We recommend investing in the simplest unit possible, if you don’t care about attaching a smart TV, a printer, or any other device to your WiFi extender.

Large homes with many rooms need bigger and broader access to WiFi.  In addition, if you have a need to upload and download large files, or have multiple people that need access to WiFi, you may want to invest in a more expensive system. Want to hook up your gaming console and smart TV? You’ll need a WiFi system with more bells and whistles.

In these examples, we recommend a mesh WiFi system such as the Eero, NETGEAR Orbi, or Google system. These systems feature both a router and WiFi extender and can transmit WiFi signals farther than the more basic WiFi extenders on the market. They are significantly more expensive than basic WiFi range extenders, but they provide more robust features.

Some people even like to get an extender for travel. 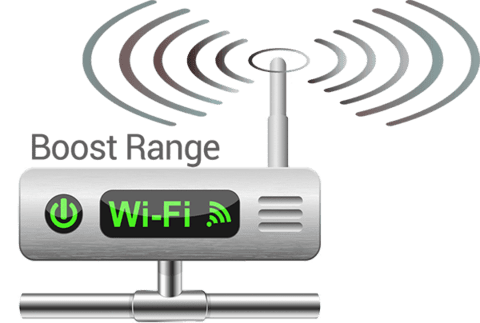 If you’re looking for a way to improve your WiFi, you can invest in a WiFi repeater, a WiFi Extender, or a WiFi mesh system. All will strengthen your WiFi, help to eliminate dead zones and allow for faster streaming. The difference is in how they function.

How Does a WiFi Repeater Work?

A WiFi repeater receives your existing WiFi signal, amplifies it, and then transmits the newly boosted signal. It is a single unit and can double the coverage of your old WiFi network so it reaches the far corners of your home and even yard.

How Does a WiFi Extender Work?

A WiFi extender works similar to a WiFi repeater: it takes your existing WiFi signal, boosts it, and then rebroadcasts it throughout your home.

How Does a WiFi Mesh System Work?

Most WiFi mesh systems we looked at recommend having 2-3 units: one will act as the base router that emits a strong WiFi signal, and the others push the signal out into remote areas of your home. 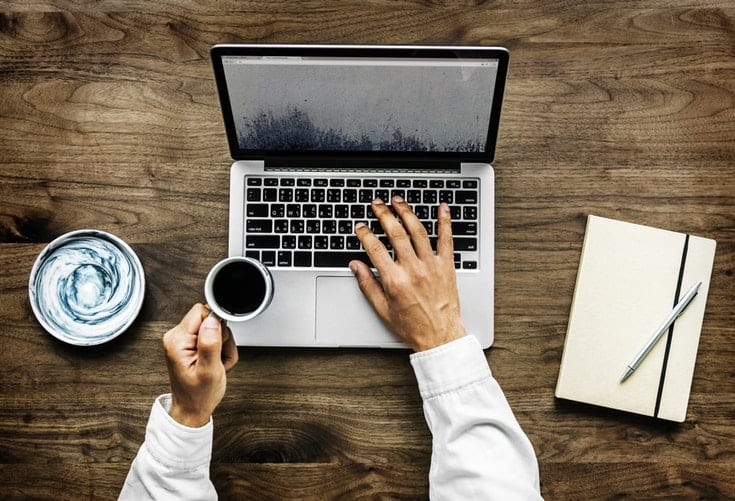 Most WiFi extenders are compatible with the vast majority of routers on the market. If you purchase a WiFi mesh system, you don’t need to worry about compatibility because the system acts as a router.

If you purchase a WiFi extender, do your research in advance. Some WiFi extenders operate on the 2.4GHz and 5GHz band. Your router must work on the same band as your WiFi extender.

If, for example, your router only supports 2.4GHz but your extender is 5GHz, your WiFi will not be as powerful as it could be. The extender can still be used, but even the best WiFi boosters won’t give you as much power if you’re not using devices with the same band. 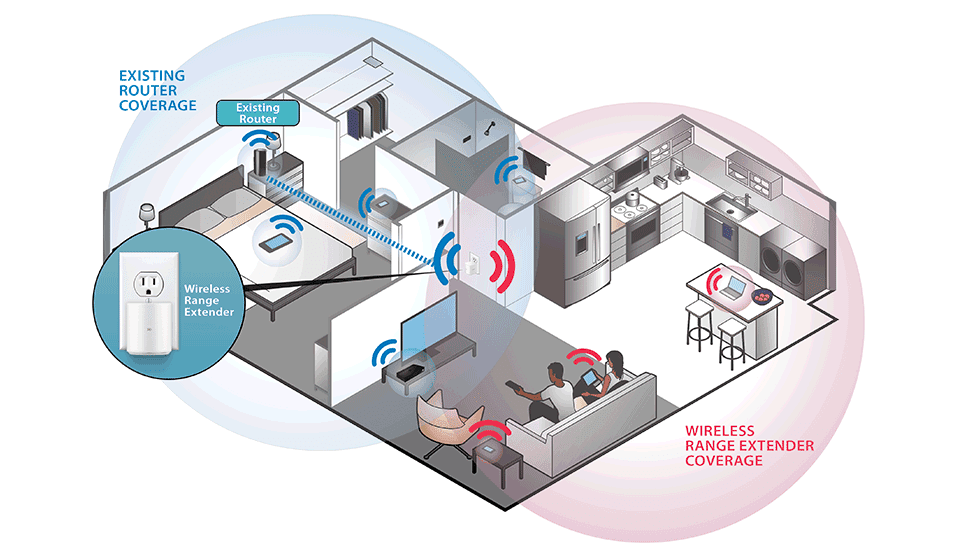 Common household items like walls, microwaves, baby monitors, and even furniture can interfere with your WiFi signal.  In addition, I if you invest in a WiFI extender, placement is key. No matter how good an extender you purchase, it won’t work as well if you don’t place it in a good location.

However, if you want to boost it to more than one area of your house, sketch the floorplan of your house. Mark the location of your wireless router and dead zones or slow zones. See if there’s a power outlet located midway between these areas, and plug your WiFi extender in there.

Once you have it set up, take your devices into the previously highlighted dead zones and see if these dead zones have improved. If not, try moving your WiFi extender.

Should You Get a Plug-in or Desktop Extender?

We have a mix of plug-in extenders and desktop WiFi range extenders on our list and the truth is, both are good. Based on plug-in or desktop alone, one isn’t better than the other. What does differentiate them, however, is a mesh system versus a simple plug-in unit.

The desktop units we reviewed are mesh units, while the plug-ins are simple WiFi extenders. If you have a large home, a mesh extender may better suit your needs, so in that case, a desktop would be better. 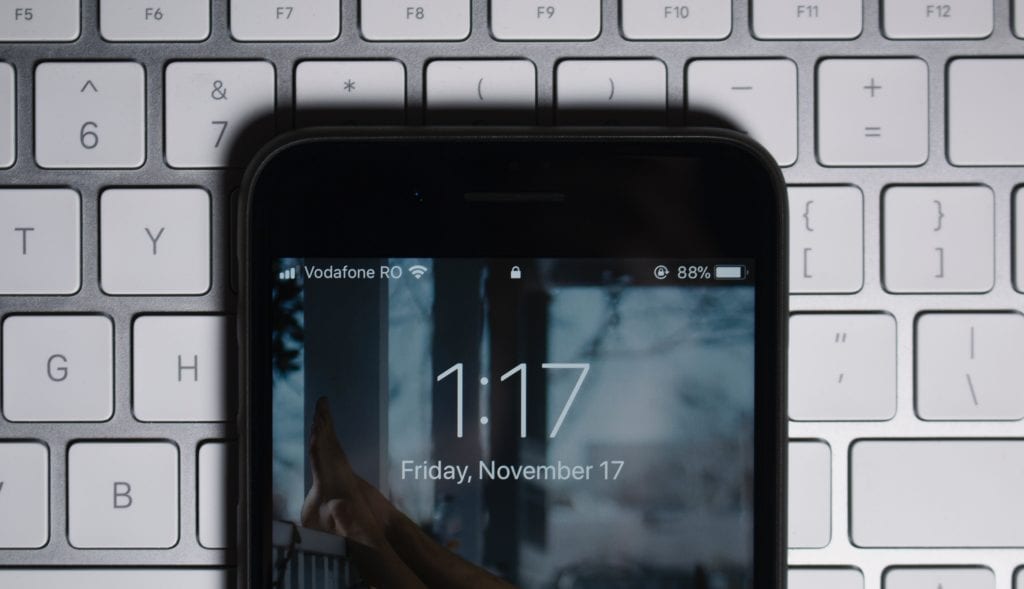 With the help of the best WiFi boosters, your home, apartment, or business can experience a better internet connection. In addition, if you wish to learn more about the WiFi extenders, read our individual WiFi booster reviews.

We’ve reviewed the best WiFi boosters and compiled a buying guide to help you find the right WiFi extender for your home.

Read More
Advertising Disclosure
Top5.com has an advertising relationship with some of the offers included on this page. However, the rankings and listings of our reviews, tools and all other content are based on objective analysis. Top5.com does not always include all service companies or products available in the marketplace. Top5.com strives to keep its information accurate and up to date. The information in our reviews could be different from what you find when visiting a service provider or a specific product's website.
Share on Facebook Share on Twitter Pin on Pinterest Bookmark this Page Share On Email
Test Your Knowledge of the Handy WiFi Hotspot Booster
Why Digital Nomads Love WiFi Boosters for Travel
Dead Zones, Be Gone: Top 5 Reasons You Need a Home WiFi Booster
How Do WiFi Boosters Work?
Why Do I Need a WiFi Booster?