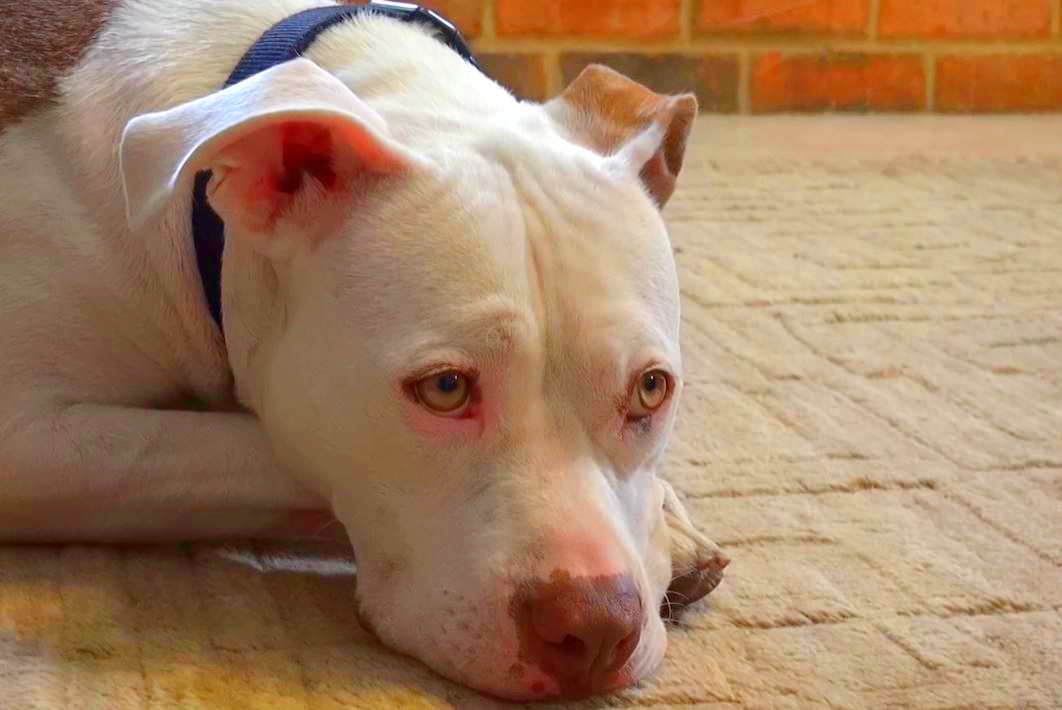 Checkers was normally such an obedient and quiet dog, and he was great with the kids. But that night, it was like he was an entirely different animal.

He barked and barked and kept the family awake all night, plus he seemed way more aggressive. But when she discovered why, she got the kids out of the house as fast as possible.

Gina Gerrity had never been much of a dog person. But when she saw the Facebook post saying that Checkers needed a new home, she just couldn’t resist.

The kids fell in love with him instantly – especially little Marie – and he was so gentle with them. But his behavior was about to take a serious turn for the worse.

When they picked him up from the shelter, there was no indication that Checkers was a dangerous dog. His previous owner had passed away suddenly, and the shelter didn’t offer much information about him.

It was when the dog was left alone that he started to growl and walk in circles. Then one night, things got seriously out of control.

Gina woke with a start to the sound of loud barking. It was 3 am. The mother-of-three got out of bed to see what the matter was, but Checkers was just sitting on the floor staring up at her like nothing had happened. Had she imagined it?

But an hour later, there was the barking again. And this time, Gina found out why.

The confused mom discovered something under Checkers’ paw. A piece of wool from her knitting bag had found its way onto the floor and spooked the poor pup – probably because it resembled a spider.

Gina picked it up and laughed. She was relieved the whole incident had such a silly conclusion. She turned the lights off and went to bed. But with all the drama, she’d forgotten to close the door.

She heard Checkers barking again, but she was too tired to see what was going on. A few moments after she’d drifted off to sleep, Gina woke with a start to find Checkers looming over her bed.

The surprise at seeing the huge dog right in front of her face caused her to let out a yelp, which sent the dog zooming around the house – just as her youngest had stepped out of her room to see what was going on.

When Checkers saw little Marie standing in the corridor, he stopped dead. Marie loved Checkers, but his energy was way too high to be around such a small girl.

Gina saw the dog staring down her daughter and reacted. “Checkers!” she called out, sending him darting in the other direction. Then, the protective mom decided to do something she never expected she’d have to.

After making sure all the kids were safely in their rooms, Gina settled the dog back down in the living room, but this time, she set up a wi-fi security camera that they used to keep an eye on the house when they went on vacation.

When she saw the footage the next morning, she grabbed the kids and left the house as fast as she could.

Gina’s mind was running wild. This would never have happened if she hadn’t seen that Facebook post; if they’d just got a puppy from the pet store rather than bring an animal they knew nothing about into her family’s home.

Leaving her kids outside where they would be safe, Gina marched back into the house to deal with Checkers.

The footage showed that Checkers had been spooked by a sparking extension plug socket overloaded by the new air purifier that had been left on overnight.

Checkers was alerting Gina and the kids to the fire hazard, and if she’d left it one more night, it could have resulted in her whole house going up in flames.

The very next day, the family took Checkers to the dog park and treated him to a fresh chicken leg to gnaw on.

“I was really worried there for a second,” admitted Gina. “I thought Checkers was going to have to go for the safety of my kids. But when I realized he was just trying to protect us, I fell in love with him even more.”

Gina hired a professional electrician to do a full inspection of the house before the kids were allowed to sleep in it again.

Are you overloading extension sockets with too many appliances? If you are, you’d better get them checked out. Not everyone can count on a hero dog to alert them of a potential fire.