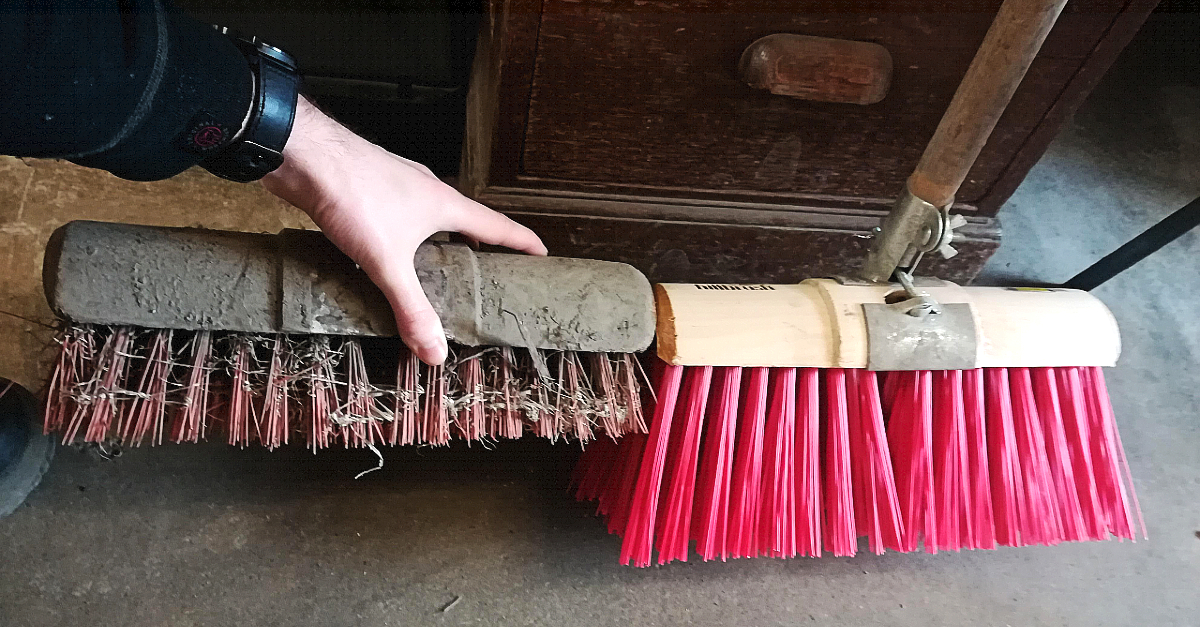 Think of the wear and tear of items doesn’t seem like anything interesting – until you see the reasons behind it.

These people have shared their before-and-after photos of identical finds in thrift stores, new purchases to replace dying objects, and some heart-warming examples of generational traditions.

Here is a stack of 500 circulated $1 bills. Next to it is the same amount of $1 uncirculated.

It’s not just the paper difference. Think of where these bills have been – and how much grim and gunk are plastered all over them. Ew. Then again, the new ones almost look fake.

This person’s father had used the same wallet (on the right) for 25 years!

He finally switched over to a fresh one during Christmas. The don’t look even a little similar! That’s a lot of hours in back pockets. Then again, it’s good to see something last so long instead of falling apart after a few months.

One user posted this photo of her dad’s new fire helmet next to the old one.

Even if the materials are meant to withstand heat, we can see how warped the old one still has become. We need to wonder how long he had to wear this before they would give him a new one.

No, this isn’t after a year of masking-wearing for the pandemic.

It’s a construction worker posting a before and after of the mask he wore during a single 8-hour shift! That’s so much dust and who know what kind of particles. So, the next time you pick up a saw or hammer, slap on that mask!

There’s always “that” pair of shoes – the ones we love to the ends of the earth and would rather cut off an arm than betray them for a new pair.

Thankfully, this guy was able to get the exact same pair of Vans – even in the same color.

No, these aren’t two different knives – they’re the exact same ones!

The one on the right is new. The one on the left was used non-stop by a butcher for more than 5 years. That’s a lot of sharpening and cutting. But it’s good to know there are things that last this long, and under extreme use.

A Tale Of Two Teddies

This user and her sister got the same bear at the same time when they were little tots.

18 years later, we can see that one of them loved her fuzzy buddy nearly to death. The other seemed to be far more careful – of maybe didn’t like it at all?

One post-man revealed the before and after of his uniform hat.

That’s 5 years of carry mail in the sun. So, if you think UV protection isn’t necessary, think again! Imagine what happens to your skin?

No, this isn’t a case of someone who brushes too much.

This picture isn’t of someone who takes oral hygiene too seriously. It’s an archologist’s detail brush after only one day of use! That’s quite amazing!

What Are The Odd?

No, this person didn’t buy two belts – one to wear and one to replace after years of use.

The top is the father’s belt and the bottom is the exact same one that the daughter suddenly found in thrift store! What are the chances!

This is a man’s backpack after two years in the Pilbara desert.

The Pilbara is a large, dry, thinly populated region in the north of Western Australia. It is known for its Aboriginal peoples; its ancient landscapes; the red earth; and its vast mineral deposits, in particular iron ore.

A Matter Of Distance

These are two, exactly the same bolts.

The one on the left is further inland. The one on the right is right beside the ocean. That’s some serious (and interesting) erosion. Mother Nature isn’t something to mess with.

In this case, we have two balls from a pinball machine – old vs. new.

What’s interesting is that we would have thought there would have been more wear and tear. But it seems these little guys don’t give up easily.

No, this isn’t a purchase to replace an old hat. It’s much more heartwarming.

The one on the left is the father’s university hat from when he was in school. The one on the right is his daughter’s hat for when she’s about to being at the same school, so many decades later. Wonderful!