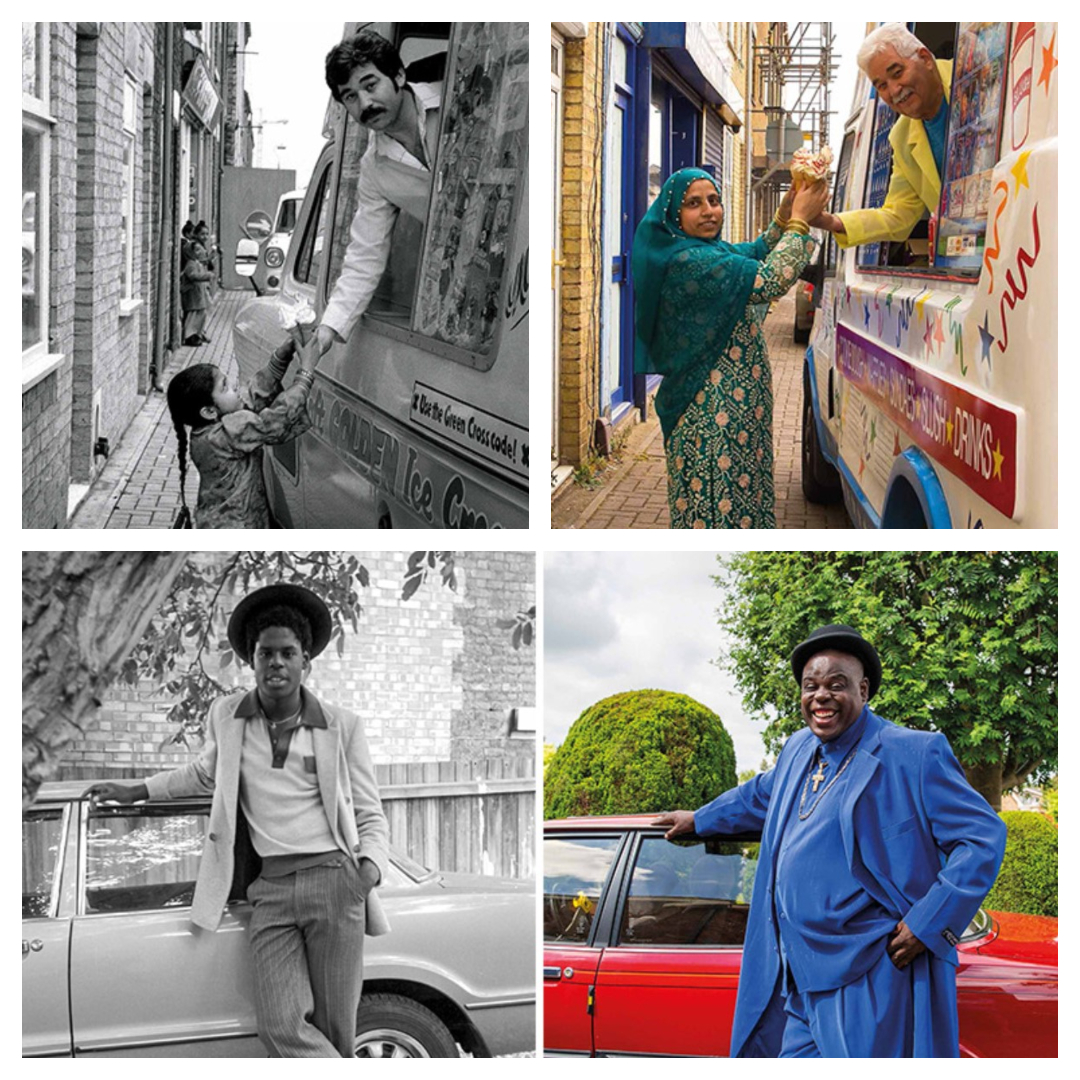 In the 1980s a dedicated paramedic named Chris Porsz spent a lot of his time pursuing a passion of his. This passion was photography. He loved walking around and taking photographs of seemingly normal people, but at the time, he had something special in mind.

His plan was to release a book called “Reunions.” Eventually, he managed to track everyone down that he had taken pictures of in the 1980s and he got to recreate those old photos. Let’s take a look at some of the most brilliant photos taken 40 years apart.

In this photo, you can see a man proudly standing next to his Ford Cortina. This man’s name is Paul Smith and he was a porter for the same hospital as our photographer, Chris Porsz.

Chris has spoken about it, “The photo was taken outside my flat and it was my neighbor’s car. I had asked Paul to dress colorfully to bring the old mono picture alive and as you can see he didn’t disappoint!”

Gino, which he liked to be called, always drove around the country in the summer heat to sell ice cream to local children.

After then, Gino and his wife started their very own Italian restaurant. They now have three children together.

Now that she is all grown up, Zahida has said, “I used to live near Cromwell Road and I’d often buy ice cream from Gino, I usually had a cone with strawberry drizzle and sometimes a chocolate flake. I think I was about seven in the photo.”

In the double stroller, you can see Nathan and Lisa Yates on a sidewalk in Peterborough. On this day, the two- and three-year-old siblings were out for a walk with their mom when they found Chris in the street.

Chris has said, “I really admired their enthusiasm to take part, especially when Lisa even sourced a Mr. T T-shirt. Since the reunion, Nathan and I are no longer strangers but friends and often stop for a chat on our travels around town.”

In this photograph, you can see policeman Jayantilal Kotecha. In this photo, he was busy writing a ticket on King’s street.

Kotecha still remembers this day, “In 1978 the winter was so severe the roads were frozen and the diesel froze so there were no buses or cars. Out of 26 traffic wardens, my friend and I were the only two to turn up for our shift after walking several miles to work. I remember the working conditions were very strict and we weren’t allowed to walk in pairs, not even to lunch.”

Chris spotted Hoard and Sharon Marshall in Cathedral Square where they were in the process of shopping for a wedding ring. They met a few years prior and got married not long after this photo was taken.

They had children while Howard worked as an engineer for Royal Mail for 40 years before retiring. Sharon became a stay-at-home mom once their first child was born.

On this day, best friends Bashir and Abdul Karim decided to walk through Gladstone Street. At the time, Abdul lived nearby while working at a local brick and paper factory in Peterborough. Later on, he became a car salesman.

He is now retired in Nottingham and he has a wife and nine children. Sadly, his health has deteriorated throughout the years.

In this photo, five friends are sitting together while getting their picture taken on Gilinstones street. From left to right, they are: Nasar Ali, Ali Shauqat, Mohammed Shanawaz,, Khalid Mahmood, and Mohammed Riza.

Chris helped the gang get back together for a reunion photo in 2021! They wanted to do it in 2010, but one of them was not available at the time.

Brothers Shujah and Zia Saklain live in Gladstone. When they were younger, they used to enjoy playing on their neighbor’s wall. Chris noticed them on the wall and decided to take a photo.

The two still live in Peterborough but they are no longer living in their childhood home. Still, they decided to come back for their reunion.

Andy Ireland may look like a chimney sweep in this photograph, but it was merely an outfit for a dress-up competition at the Gladstone Street Carnival in 1981. As he grew up he became an accomplished physiotherapist.

In fact, he studied under Sir Andy Murray. He retired some time ago and he moved to London to be a consultant for a clinic there.

This is a special photo, as it is a photograph of our photographer Chris Porsz and his wife, Lesley. The photo was taken to show their accomplishment of hitchhiking across Europe and North Africa in getting back in three weeks!

Five years after this photo, they were happily married and even had three children together. Today they are celebrating the fact that they have seven grandkids!

After 20 years of work, he retired with a pension in 2006. But these days, he loved to reenact grand medieval battles in his free time. Here he is with his newest cleaner, “Glutton.”

This photo was taking at the country and western show in 1984. Joe Wright could often be seen with his pet barn owl – Rocky. Joe recalls, “We hand-reared several rescue Barn Owls and I’d take Rocky into town on my shoulder, which made people smile.”

Joe even had something to say about the reunion, ”We’ve got dogs, guinea pigs, and goldfish now. It was lovely to have an owl on my shoulder again and brought back great memories.”

Bernard is a man with humor, evidently shown as he was more than happy to set up for a funny reunion with Chris Porsz. Bernard has been married to his wife, Irene for the last 58 years and now owns several donkeys.

Chris said, “It was one of the most surreal and funniest reunions I have ever done. All thanks to Bernard who was a great sport and up for a laugh and to Vanessa and Jerry Rice at Four Acres of Thorney, near Peterborough who kindly provided 10-year-old Jessica.”