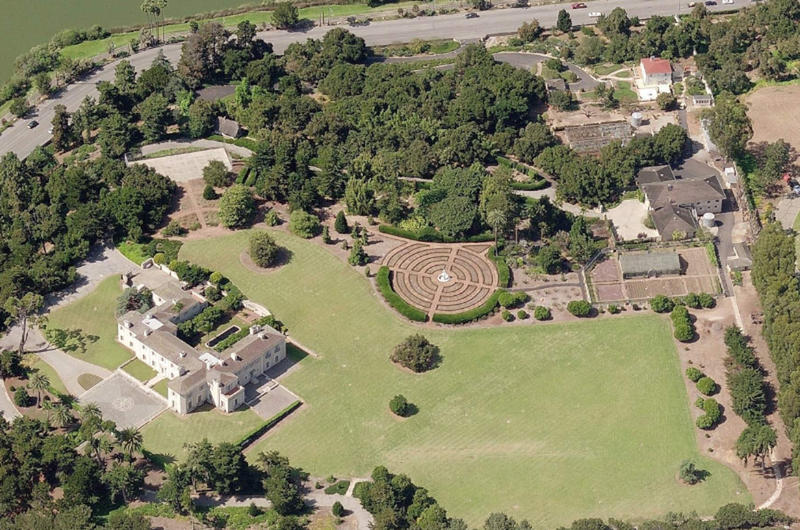 Rumors had been going on for a while now. Curious kids would sometimes walk by the Santa Barbara mansion. They all had the same question burning in the minds: “Who lives here?” But they could never see anyone nor did they have any way of finding out.

There hadn’t been anyone going in or out of the estate for a long time now and the unkempt trees shielded the mansion from prying eyes – keeping it an enigma. The staff must have been getting paid, but by who?

A man by the name of William A. Clark had owned the mansion. He was an extremely successful man who was a senator in Montana. The billionaire tycoon liked to “collect” mansions all over the country.

It doesn’t sound so far fetched as far as rich people live. But where was the Clark family now and why would they leave the estate only to keep it maintained? The gorgeous mansion was adorned with many sentimental pieces.

The family pulled down one of their houses in New York and had the elaborate wood panels and beautiful decorations shipped all the way to the Bellosgaurdo mansion. Bellosgaurdo translates to “beautiful lookout” from Italian.

This must have cost the family a fortune to do! And unfortunately, the Clark family was about to experience its first tragedy. It would happen soon after the renovations for the mansion were completed.

William sadly died in 1925 and his wife named Anna would inherit his fortune including the mansion. The widow saw to it that the mansion was filled with an amazing collection of art. She even had a few portraits of herself on show. The collection was neatly curated.

Still grieving for her husband, the family would soon have even worse luck. They’d have to abandon ship when a natural disaster came their way.

Bellosgaurdo was roughed up violently when the great Santa Barbara earthquake came knocking. This meant that the family would have to spend a fortune getting it back to its former glory.

Anna alone was the one to rebuild it. The renovations were finally finished in 1933 and you can see her handiwork today. Even after all the time and money, she put into the house she decided to leave shortly after. She left behind some confusion instruction.

The family had made the decision that Bellosgaurdo would be their vacation home. Anna left more than a hundred staff members to maintain the mansion and carry on renovating it. The house sits waiting in pristine condition.

However, the Clarks would never return to the estate. The staff still kept following their instructions even if their employment was in question. Then one day the lead staff member answered a mysterious phone call.

The staff had always worked through a chain of command that came from lawyers of the Clarks. One day they answered the phone and it wasn’t any lawyer. It was a woman’s voice and she said she was Huguette Clark.

Anna had sadly passed away and Huguette was her daughter. She was the new heiress of the estate and she had told them to keep what they had been doing up. She did however stipulate that they should work extra hard on the cottage at the back of the estate.

A Place For Memorial

The cottage was called Andree’s Cottage and was named after Anna’s oldest daughter, who had died in 1919 from meningitis. The staff could only assume that Huguette would want to come by and pay her respects at the cottage so they kept it cleaner than ever.

Even as they kept it beautifully clean, Huguette never came by. The staff was growing weary with rumors questioning what was really going on.

Everything In Its Place

The staff still kept the estate as tidy as ever for a family they’d never seen. All 27 ghostly rooms were kept spotless and maintained because of the maids, gardeners, and craftsmen that worked hard.

It cost Huguette $40,000 every month just to keep the property maintained even though she had never actually set foot in it apart from her youth. The staff was starting to wonder if they’d ever see the family. Huguette was very old by now, probably in her nineties. Was she even alive?

In her youth Huguette was eccentric. Even though she had never gone back to her childhood fortress, she had invested a substantial amount of money to keep the estate up.

She was a painter and spent most of her time in an apartment in New York that took up the entire 12th floor. After Anna passed away Huguette withdrew from society for the most part and passed the time in a very eccentric manner.

Due to being rather “skittish around strangers”, Huguette preferred the company of her doll collection to other people.

She had been spotted at top fashion shows, but was reported to quickly rush back to her hideaway with sketches to make clothes for her dolls. It was this paranoid behavior that would eventually inform the fate of Bellosguardo.

Huguette had feared that her family was out to get her money. Her lawyers had been begging her for years to make a last will (one of whom wanted to be the sole beneficiary).

It was upon her passing that a will did indeed surface – and the details upset a lot of people. The future of Bellosguardo had finally been revealed.

The vast majority of Huguette’s money was left to various charities or people in need, and Bellosguardo was given to a board of directors with a simple instruction: that the grand mansion become a foundation for the arts.

Shortly after, the doors were opened to the public, revealing a pristine time capsule of treasures.

Guests stared slackjawed as they walked the halls of Bellosguardo to admire the priceless art and antique furniture. In the music room, a pristine 1709 Stradivari violin sat on display, looking like it had been well-loved, despite having not been played in six decades.

And that was just what was inside. It was the house itself that really left them speechless.

The parquet floors were immaculate and 100-year-old furniture and fabrics looked like they had all been restored; except they hadn’t. Staff had just kept it in perfect condition for years and no one had used it.

The single-marble-slab bathtub looked to be in such good condition, guests wanted to hop in there and then for a soak. But it was the surrounding grounds that really inspired awe among visitors.

Fountains and pools brimming with clear water. Grass and hedges trimmed with precision. And, as per Huguette’s request, the little cottage dedicated to her sister was still ready to welcome guests.

Luxury cars sat in the large garage – all with their original license plates. Despite needing a few upgrades, the classic motors were valued at $85 million. It was at this point that some disgruntled family members swooped in.

Despite the will, an incredible 19 extended family members tried to claim the fortune as their own (even though Huguette had already been massively generous with them).

The board of directors were at a loss as to how to proceed with the family claims that just kept stacking up. Then, to make matters worse, the taxman came knocking.

Everything from gifts to expenses bequeathed by Huguette had to be reviewed by the IRS. Fortunately, the money she had left to the board was more than enough to cover the liability, and the lawyers quickly saw off the distant family.

But now they had to deal with running the foundation itself. Should they sell the property and use the money to keep up Huguette’s philanthropic endeavors?

The board decided to push on with plans to keep Bellosguardo open to the public. It is currently scheduled to become “a new home for art, music, history, and culture on the California coast.”

New life will soon be breathed into the locked-away mansion with art galleries, classes, and family picnics along the extensive yard. What was once hidden will now be enjoyed by anyone that wants to visit. But not all empty mansions have such a happy ending.

There are almost 1.5 million empty homes in the United States – and wealthy coastal communities like Santa Barbara tend to have similar stories to Bellosguardo – vacation homes that have been left empty for years.

If anyone does have an empty mansion and they need a house sitter for a few decades, please let us know!