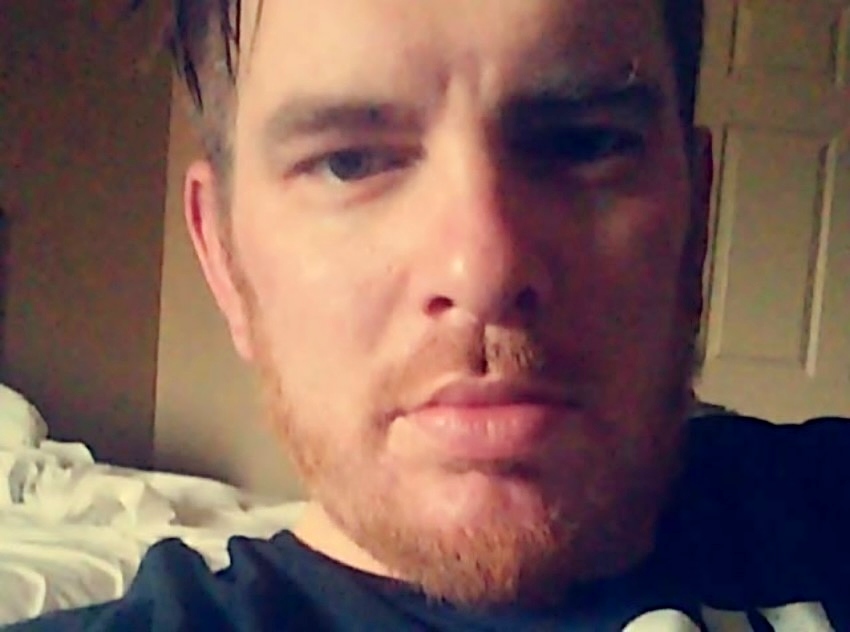 His eyes wouldn’t leave the note, reading over it again and again. He was beyond confused. He couldn’t stop thinking about it, replaying the previous day in his head. He was desperate to figure it all out.

He hadn’t done anything out of the ordinary, at least, nothing that would warrant this. All he wanted to do was to help the older woman. Why had they taken it so personally? He didn’t deserve this.

Kasey Simmon’s mom always said that Texans took hospitality seriously. As a young man, Kasey always respected those around him, he was a good man, his caring nature went far beyond family.

It started as an ordinary day in Texas. But Kasey had no idea that a friendly gesture to help a stranger would lead to this.

It all started at a Kroger supermarket. Kasey was minding his own business when he noticed the old woman with bloodshot eyes. He wanted to help, but he was careful not to make her feel uncomfortable.

He stood behind her and commented on the weather, trying his best to be as casual as possible. He told her not to look sad and that she was a beautiful lady. But his words made her even more upset.

Her frown grew more prominent, but Kasey wasn’t easily deterred. The old lady reminded him of his own grandmother and he couldn’t stand to see her so upset.

He tried desperately to crack a few jokes, he wanted to make her smile. But he never could have expected her reaction. Instead of smiling, the old woman began to cry.

Kasey was too invested to walk away. He watched as tears streamed down her face, it saddened him. He wanted to help her. Others might’ve given up and left her alone, but Kasey didn’t want to, not with tears in her eyes.

Kasey was determined to change her mood, even if it meant that he had to act a fool. After all of his antics, something finally happened.

Her face had turned pink and her grey hair was messy, tears painting her wrinkled face. It broke Kasey’s heart, she was so sad. But finally, the woman revealed a tiny smile.

The tiny smile felt like a ray of sunshine to Kasey. He made her smile and he was determined to do more for her.

Once he finally got her to smile, he offered to pay for her groceries. The embarrassment was evident on her face. He insisted until she allowed him to pay.

Kasey was on a roll, he knew that he had the power to turn her sad day around. He always believed that kindness could cure all evil, that was why he made one last offer.

He helped carry her groceries and gave her his Applebees business card, telling her to call him if she ever needed his help. Once he had greeted her, she was a lot happier than before.

But before she drove off, she decided to write him a little note. Kasey was startled when she shoved it into his hand. Before he knew it, she had driven off. When he read the note, he was left with tears in his eyes.

The lady had written, “Today is the anniversary of my husband’s passing. I’ve been finding it so hard to make it through the day. Thank you for your kindness.” The paper was stained with tears.

Kasey’s heart ached for the old lady, but he was happy that he got to help her. He walked away, thinking about her. Kasey hoped she was okay. But he had no idea what this encounter would lead to.

By the time the next afternoon rolled around, Kasey could no longer dwell on the old lady. He worked as a server at Applebees and he was in the middle of a late-night shift. The restaurant was packed, and he was rushing to clear a table for a small family.

But he could tell that something was up. The small family consisted of two parents and two young children. All they ordered were small flavored bottles of water for 37 cents each, before asking for the bill.

Being a dinner rush, any other server might have been annoyed by the family. They even asked to split the meager bill between two credit cards. But Kasey was no ordinary server.

Instead of anger, he politely did as they asked, choosing not to judge. When the family left, and he fetched the receipt, his jaw dropped as he found another note left for him.

The note was from the mom in the family. Decorated with hearts, and even though it spelled his name wrong, the note explained that the old lady Kasey had helped the day before was her mom.

She expressed the family’s gratitude and asked him to accept their gesture as a thank you for his kindness the day before. When Kasey looked at the receipt, he was left in tears again.

Kasey could not believe his eyes. It seems ordering the flavored water had just been a ruse. Kasey had to check in with his manager if this was really happening.

He felt like he didn’t deserve it. The manager confirmed it was real. For a 37 cent bill, the family had left Kasey a $500 tip.

Kasey was so amazed by what had happened that he posted about it on social media. In no time, the story went viral. Before long, even national news agencies were running the story.

The reaction to Kasey’s story has been overwhelmingly positive. Praised for his kindness, Kasey continues to look for opportunities to help others.

Kasey’s philosophy in life is to be kind at all times. His example may be difficult to follow. These days, most people would rather look out for themselves than ever try to help another person.

It is said that having a kind heart costs you nothing. For Kayla, working in a convenience store was the only way she could make ends meet.

A hard-working girl through and through, Kayla had managed to fight her way to college, snagging a lucrative scholarship that covered her tuition. But although life was good to her, not all of it treated her right.

Kayla was born in a struggling family to a mom who fought with substance addiction for years. Alongside her two younger siblings, the family of four moved across the country before settling in Colorado.

Kayla’s mom became clean right before Kayla started high school, and things were finally looking up for their tiny family. They had no idea everything was about to come crashing down.

Changes In Her Body

Kayla was in her senior year when her mom started complaining about tired joints and constant stomach aches.

As any loving daughter would, Kayla put everything aside, even taking a day off school to drive her mom to the hospital. What they’d find would leave them beyond heartbroken.

Kayla’s mom had never been one to believe in visiting hospitals. She and her children had lived on medicine from dispensaries throughout the country.

But the pain she was enduring pushed her to visit the hospital. With her daughter by her side, she could face anything in life. She had no clue that her past had finally caught up with her.

The Consequences Are Coming

“Everything has a consequence,” Kayla’s mom used to say. “An action has a reaction, no matter how small or insignificant.”

As the mother-daughter duo waited for the doctor, Kayla could see how shaken her mom was. Deep down, she knew that whatever was going on was way more severe than the lady was letting on.

The doctor walked in with the results, and the following months became the darkest in Kayla’s life. Her mom had been diagnosed with stage three liver cancer due to her history with alcohol.

Although her family would do everything to stabilize the condition, her cancer would graduate to stage four.

Kayla’s mom succumbed to cancer two years after her diagnosis. She’d fought valiantly, all while grooming Kayla to be the best version of herself.

Even on her deathbed, she begged her daughter to always have a kind heart. “It costs nothing to be a good person,” she said. Still, she didn’t fail to remind Kayla that everything has a consequence.

Now a student pursuing a law degree in one of the finest universities in Colorado, Kayla was trying her best to finish school while watching over her younger siblings.

Since her scholarship only covered her tuition, she needed a job to help her settle her housing and transport bills. That’s where the convenience store came in.

A Day In The Life

Kayla’s shift at the store was an easy enough one. She reported at 3 PM after her classes and clocked out at 10 PM.

The day that the incident took place was like any other. Kayla arrived at her usual time and sat behind the register to work. She wasn’t even fifteen minutes in when an elderly lady walked up to her.

The lady seemed to be in her seventies, with a small basket she’d filled with groceries. She said “hi” to Kayla, her smile never wavering as she talked about her day.

She seemed sweet enough, reminding Kayla of the sweetness her mom had exuded in her last months. Kayla did her best to mirror the woman’s energy, holding her gaze and chatting as she rang her up.

Kayla’s concentration was on the woman as she tallied her produce and shared the final cost. The woman presented her card, and Kayla swiped it.

But the machine declined, starting a series of events that would land Kayla more trouble than she bargained for. The older woman’s brows furrowed, a look of worry plastering over her face. “Not now,” she whispered under her breath, low enough for anyone not to hear.

But of course, the remark got to Kayla’s ear. She saw how distressed the woman was because her card wasn’t going through and knew she had to help. Kayla told the woman it was all right. She handed her the groceries and proceeded to fish out her own cash to pay.

The older woman couldn’t believe what was happening. She tried to stop Kayla, saying she’d get her son to come to pay and pick everything up, but Kayla wasn’t hearing any of it. Little did she know she’d just kicked the honest’s nest.

The woman took her groceries and left. But she wasn’t even out of the parking lot when Kayla’s manager called her to the side.

He asked what the commotion was about, saying he’d seen her have a confrontation with the woman. Kayla tried to explain himself, but the manager wouldn’t listen. What he did next showed what kind of world she was living in.

Kayla couldn’t understand what had happened. She’d only been nice to a customer and was on the verge of losing her job for it.

A Turn Of Events

But as the day turned into evening, the manager called Kayla again, telling her that the older woman was back and asking for her. Kayla hurried to the office to find a one thousand dollar tip waiting for her.

The woman confirmed whatever Kayla had told her boss, explaining that her good heart would serve her well in life. Although everything has a consequence, there is no cost to being a good person.