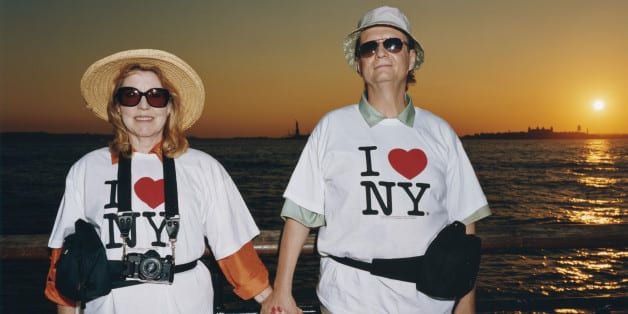 New Yorkers aren’t rude; they’re efficient. They’re always on the go, they walk with purpose and they hate tourists. Why? Because tourists slow New Yorkers down. They aren’t a part of the New York pack and they don’t understand the ways of the “New Yorkquaise” tribe. Which is why they think New Yorkers are rude. New Yorkers aren’t rude. They just don’t have time for stupid questions, aimless meandering and inefficiency. Planning a trip to the Big Apple? Be sure to memorize the below NYC don’ts if you want to avoid incurring the wrath of the locals.

5.) Don’t Be Ignorant on The Subway

The subway isn’t that complicated and there are two key NYC don’ts when it comes to riding it: don’t be slow getting on and don’t act obnoxious once on.

Rides cost $2.75 each way and you can either load your card with a dollar amount or choose the unlimited option (3-day, week or month) if you think you’ll be using it daily. When you go through the turnstile, slowly swipe your card. If it reads “please swipe again,” try again; it didn’t work.

To avoid being an obnoxious subway rider, quickly board the train once it arrives. If you’re slow, you’ll prevent people from boarding and may even cause them to be hit by the closing doors (which can hurt). If you sit, only take one seat. Don’t be a “manspreader” and take up excessive leg space. Don’t put your purse or shopping bags on the seat next to you. If you stand, hold the pole — don’t lean against it. Other people need to hold on as well and don’t want their hand beneath your leaning body.  If it’s crowded, maximize the space. Move towards the center, get close with your neighbors and enable that car to become as packed as possible.

Pushiness is okay and New Yorkers will walk all over you if you stall. During rush hour, the turnstiles act as both an entrance and an exit. Push your way through, especially if there are people waiting behind you. If not, those exiting will never politely stop to let you pass and the people behind you will swear at you for making them wait. Still confused? Let “Commuter Barbie” show you few more NYC don’ts of subway etiquette.

4.) Don’t Take a Selfie on Every Corner

New Yorkers know the city is cool — it’s why they moved there. But this is their city, their norm, and at the top of their NYC don’ts list is taking a picture of everything.

Yes, New Yorkers have seen the infamous Friends building (on the corner of Bedford St. and Grove St., should you want to check it out) as well as Carrie’s Bradshaw’s stoop from Sex and The City on Perry St. Perhaps at one time they stopped and took a photo, but now they just get annoyed by those that do. Especially if they use selfie sticks … Why? Because they block the subway and slow things down.

READ MORE: A Local’s Guide To The Best Rooftop Bars In NYC

In New York, street performers are everywhere: inside the parks, on street corners and even underground on subway platforms. New Yorkers don’t hate street performers, per say. Rather, they hate people that stop to watch them. Why? Because this NYC don’t causes delays and unnecessary congestion — tourists block the sidewalks, the metro entrances and other pedestrian areas when they stop to watch these performers.

Again, New Yorkers are efficient, and anything (or anyone) that interferes with that efficiency is frowned upon. If you want to avoid pissing off the locals, please do not stop to watch street performers. Especially if they’re inside the subways.

READ MORE: A Local’s Guide to The Best Pizza in NYC

2.) Don’t Be Inconsiderate on The Sidewalks

If you live in the suburbs, feel free to slowly walk your streets in rows of four, stop to talk to whomever you desire, or even stop to take a selfie. Just be aware when you’re in the city that the aforementioned are all major NYC don’ts.

As NYC is a walking city, the sidewalks are constantly crowded with people rushing to get to and from somewhere. Slowness is not looked kindly upon because, again, New Yorkers are efficient and don’t want to be made late because of someone else’s inefficiency. If you want to avoid pissing off New Yorkers, there are three simple sidewalk rules to learn:

If you want to know where the Empire State Building is, Google it or pull up Apple maps. Use your own resources. Nowadays pretty much everyone has a smart phone, so rather than take up someone else’s time with something you can find the answer to yourself, be resourceful and see if you can do it on your own.

New Yorkers aren’t rude, but their time is precious and they don’t want to waste it on unnecessary things.

Any other tips for navigating your next NYC visit like a pro? Let us know in the comments!