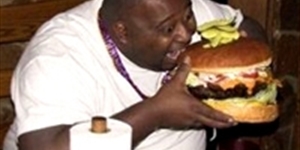 KFC mash bowls, three-beef patty burgers, chili cheese fries, Doritos tacos, and XXL burritos. For the brave souls who want to slather on even more calories, this sort of stuff just isn’t enough. The Double Down is a mere snack compared to what we’re about to show you on our top 5 picks for insane fast food menu items. 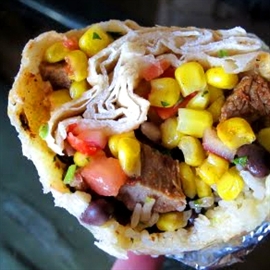 The burrito shells at Chipotle could swaddle an infant. They stuff those things with so much filling it oozes out the sides and can’t be properly eaten by 75 percent of the U.S. population. So of course their secret menu item is going to be amazing. See, if that jumbo burrito shell isn’t enough for you, you can have your burrito made out of a quesadilla. It doesn’t sound too insane now, but do me a favor: Go to Chipotle, order this thing, eat it in its entirety, and let me know how you feel afterwards. Personally, I felt great. Then gassy. Then I fell asleep and woke up the next day wondering what I did last night. 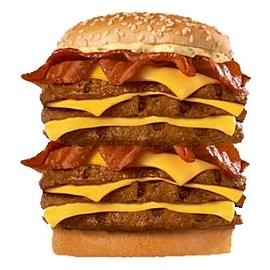 If you can’t take a trip to the Heart Attack Grill in Arizona (known for serving up pornographically big burgers), then head to your local Burger King and order one of these sopping grease sandwiches. Four beef patties? Check. Four slices of cheese? Yep. Throw some bacon and special sauce in there and you’ve got caloric heaven between two buns. 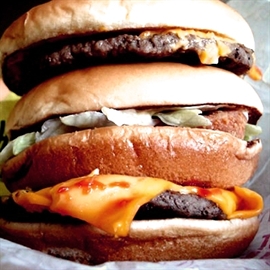 Don’t get any ideas; the McGangBang is nothing but an innocent sandwich. Innocent meaning that it will probably send you to the hospital for a quadruple bypass. Ready for a McGangBang? Then get ready for a double cheeseburger with a full-on McChicken sandwich stuffed between it. God bless you America, God bless you. 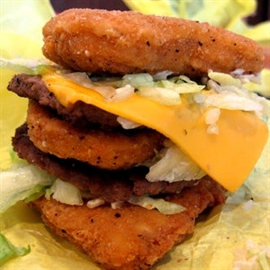 You know what? My double Big Mac isn’t … heavy enough. Screw bread – buns get in the way of meat. You know what I’m going to do? I’m going to use chicken patties instead of buns. Okay, sure, you might be thinking that sounds sort of like a Double Down. Yeah, except that you have to remember the double Big Mac has three buns which equals three McChicken patties with two beef patties plus cheese stuffed between them. Eff yes. 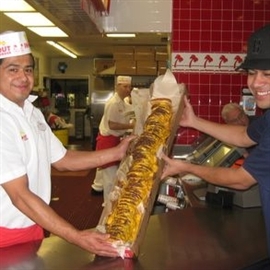 Ah, In-N-Out. Infamous for its secret menu items: animal fries, protein style, grilled cheese, mustard grilled burgers, yadda, yadda, yadda. If you think you’re elite knowing about those items, think again. Every stoner within a 100-mile radius of an In-N-Out knows about them. Forget about the super secret menu, let me tell you about one item in particular: the 100×100 burger. What is it? Easy. A 100-patty burger. Need I say more? It’s 100 patties on a burger. While $100 burgers may be on the menu in NY and LA, this In-N-Out stack o’ meat dominates all other burgers in pure beef power.