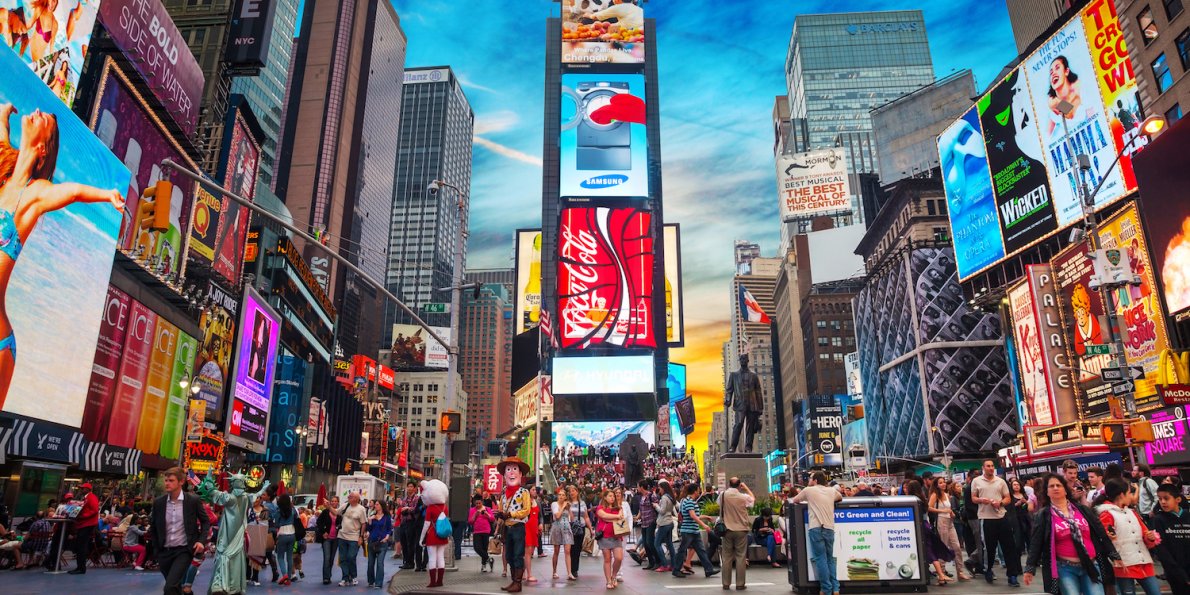 Have you ever seen countless photos of a city on Instagram and Pinterest and you make it your life goal to visit? Then, you get there and you find it overwhelmingly disappointing. Well to be fair, New York actually does live up to the hype but these 5 main attractions in NYC are overrated.

You still might have a good time at these places, but you’ll probably have more fun elsewhere… and you just might walk away thinking you’ve wasted your time and hard-earned tourist dollars. So here’s the inside scoop on the 5 main attractions in NYC you can just skip.

Junior’s is another prime example of how hype can really get totally out of control. Here’s a secret: you’ll be hard pressed to find New Yorkers who eat here. The ones who do may possibly have been dragged along by eager out of town friends. It’s a cute place. The food is fair. Most people go to Junior’s for the cheesecake, though, so let’s talk about that.

You will find reviews where people definitively declare that Junior’s serves real New York cheesecake. Well, yes, I would expect that it would. It isn’t bad. However, is it nirvana inducing? No. Is it so extraordinarily special that you need to go out of your way for it? Not really. Can you find cheesecake that is just as good somewhere else? Sorry to say, but yes, you can.

Here’s another secret: just about every little diner and restaurant in New York that has cheesecake on their menu will also be serving the real New York version, and ten to one, you might like it more than Junior’s.

At one time, the Village meant quirky shops, vibrant cafes filled with intelligent, interesting people, music venues that showcased up and coming talent and quaint tree-lined streets. That was before a private university took over a huge chunk of the area and demolished some historic buildings, the small businesses were priced out and replaced with generic stores you could find in Peoria, and the starving artists, writers and actors couldn’t afford the rent and moved away.

It’s visually beautiful, but it’s no longer the center of creativity and counterculture that it once was. Pockets of brilliance do exist – the Village Halloween Parade, for instance, is sheer magic – but it’s waning, and what is left is struggling to survive. Sadly, obnoxious college students and bank branches outnumber the Edward Hoppers and Love Saves the Day shops by a considerable margin. There’s a 7-11 on St. Mark’s Place now, for crying out loud.

The exterior of the Guggenheim Museum, designed by Frank Lloyd Wright, is well worth seeing. The design is unique and is a piece of artwork as well, making it one of New York City’s most recognizable buildings. The interior? Well, that depends.

The Guggenheim has a small permanent collection, but the exhibits in the main building change. This means you might be in for something completely sublime or totally gawdawful. Unless you’re actively interested in whatever is currently showing in the rotunda, it’s really not worth $18. However, it may be worth visiting just for the photo opportunities.

Dylan’s Candy Bar is bright, colorful and one of the largest candy stores, packed with more than 7,000 types of candy from all around the world. It was the childhood dream of CEO and founder Dylan Lauren, the daughter of fashion designer, Ralph Lauren. One of her sources of inspiration was of course, ‘Willy Wonka and the Chocolate Factory.

Since 2001, Dylan’s Candy Bar has become a lifestyle brand with a café, bar, private party rooms, nostalgia shop and apparel section. For the adults, there is also a cocktail bar where you can order creative creations like the Strawberry Nerd Mojito, Chocolate Martini or Jolly Rancher Cosmo.

It’s hard not to like a candy store, but there’s no reason to trek across town for this one. It’s overpriced, it’s glutted with tourists, and you can find the same exact products elsewhere. A good alternative is the candy shop in Toys R’ Us in Times Square, which is done up to resemble the board from the children’s game Candyland; another is FAO Schweetz at the FAO Schwarz toy store.

Here’s how your visit to the ESB works: you go through a long, miserable queue, during which time you’re forced to listen to relentless sales pitches for audio tours and other add-ons. You’re forced to pose for a photo you really don’t want to take. Then you’re shoved onto a small elevator and discharged at the observation deck area. Said observation area resembles a cage.

It’s really not all that fun, and it’s a far cry from that scene in Sleepless in Seattle. The views are spectacular, let’s be fair. However, anyone in the know will tell you that if you go to Top of the Rock – just about 15 blocks north of the Empire State Building – you will have views that are just as nice. You’ll also have a really, really good photo op of the Empire State Building itself, in a much classier, more amiable environment.

New York, the city that never sleeps, has so much going for it. The good certainly outweighs the bad. But there is bad and these 5 main attractions in NYC can be taken off your itinerary without later regrets.

There are lots to see and do in New York — if you have limited time and money, save it for the good stuff. But what do you think about these attractions? Do you think they’re overrated? Are there other overrated main attractions in NYC?

We’ve got plenty of articles to guarantee you the best time in New York City: A Local’s Guide To The Best Rooftop Bars In NYC, How to Do NYC on The Cheap: 10 Things That Are Actually Cheaper in NYC and The 10 Coolest Things To Do In Brooklyn – An Insider Guide.