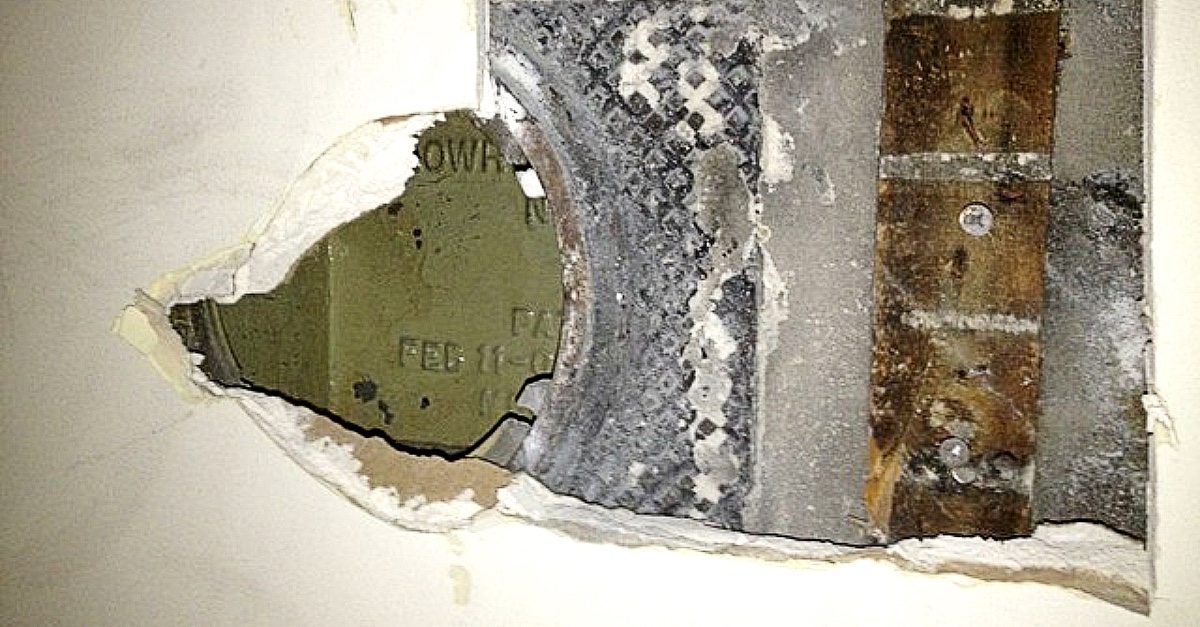 After nights of restless sleep, he finally identified the culprit. He followed the strange wire to the hollow wall. Without a thought, he grabbed a hammer and made a fist-sized hole.

He grabbed a flashlight and peered inside but what he saw was the stuff of nightmares. He jumped back in fright, desperate to get away but there was no running from the horrors his new house was hiding.

32-year-old, Jonathan Lewis was more than excited when he received the keys to his new home in Walton, Liverpool.

As an elementary school teacher, saving for his first home was no easy feat. He had worked day-in and day-out for over a decade to earn as much as he could. But it was only when he ran into some inheritance that he finally reached his goal – or so he thought!

Like many of us, having a house of his own was one of Lewis’ biggest life goals so when he finally realized his ambition, he was overwhelmed with emotion.

Lewis walked through the front doors as if they were made for him. He loved almost everything about his new home. But he had no idea what secrets his new house was hiding.

Too Good To Be True

For Lewis, one of the best things about the house was that he didn’t need to renovate anything. It seemed too good to be true – and it was!

“There was a wire coming out where the previous owners had the fridge but I didn’t know where the wire was plugged in so I knocked through a bit of the plasterboard to see what was there”, Lewis recalled.

Lewis took time off work to unload boxes and settle into his new home. The move into his new house went as smoothly as it could have gone so Lewis didn’t understand why he suddenly felt so exhausted.

Every morning, he’d wake up feeling like he didn’t get any sleep at all. Little did he know, something was keeping him up at night.

Lewis wondered what it was that could have been keeping him tossing and turning every night. He was a light sleeper so when he identified the constant loud hum coming from the fridge, he just knew it had to go.

Wasting no time, he immediately decided to replace it and got to work removing it. But there was a problem.

There was a suspicious wire that ran from the fridge into the sidewall. He had no idea where it was leading to so without much thought, he grabbed a hammer and made a fist-sized hole in the wall.

He peered inside to assess the situation and jumped back in horror!

A Pair Of Eyes

Peering into the darkness with a flashlight in hand, Lewis saw eyes looking back at him. His heart stopped as he jumped back in fright. He steadied his breath before peering inside the creepy wall again.

“I knocked through a hole about the size of a fist, shone a light in and there was a doll just sitting there”. But that wasn’t all, it was a small boarded-up room.

Lewis got so freaked out by the hidden creepy doll that he stopped what he was doing and called his friend to tell him about it.

Lewis wasn’t a very superstitious guy but he had to admit, being alone in a new house and finding something as creepy as this, gave him goosebumps. Little did he know, the worst part wasn’t over yet.

Lewis’ friend told him to calm down and that he’d be over there in 20 minutes but Lewis couldn’t wait that long. As spooked as he was, he wanted someone else there to investigate this empty room with him but his imagination was running wild.

Waiting was making it was so he did something he probably shouldn’t have.

Not being able to take the suspense, Lewis held his breathe and investigated the creepy scene himself. It wasn’t long before he found something sinister.

Lewis’ blood ran cold as he picked up the mysterious note that was placed on the lap of the rag doll. His hands started to shake as he unfolded the note. It looked decades old.

It read: “Dear reader/ new homeowner, thank you for freeing me! My name is Emily. My original owners lived in this house in 1961. I didn’t like them so they had to go. All they did was sing and be merry. It was sickening.”

“Stabbing was my choice of death for them so I hope you have knives. Hope you sleep well”. Goosebumps rose on Lewis’ arm but something wasn’t right…

As Lewis looked around at the empty room, he begun to understand what was happening and a smile formed on his face.

“Some of my friends have told me to put my house back on the market and move out but I think it’s just a laugh. I’ll be honest, I found the whole thing hilarious. I’d probably do the exact same thing”, Lewis said. But was it really a joke?

“The letter says 1961 but the estate agent said when she was showing me around that the kitchen was only done four or five years ago. I think it must have been put there then because the paper doesn’t look very old and looks relatively recent”, he said.

The paper looked like any other notepad in the current day. But could he really rule out the possibility that his new house was haunted?

Lewis wondered if this creepy find had anything to do with his lack of sleep. He briefly entertained the idea of a haunted house but the more he thought about it, the more his logic stepped in.

Luckily for Lewis, this was all just one elaborate joke that was harmless but would he put the doll back and let the next homeowner find it in decades to come?