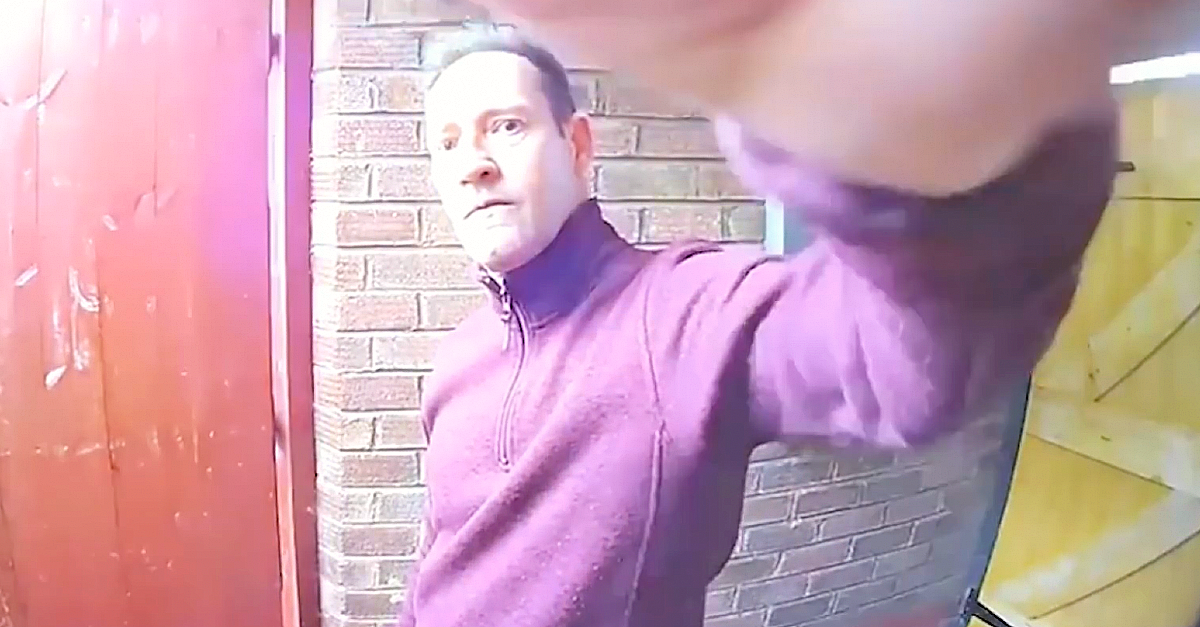 The floodlights were on 24/7. They shone through their bedroom window preventing them from getting sleep. He waited two weeks for things to change but now, he had enough. Now, it was blatant disrespect.

His new neighbor stood in front of him, holding a pair of pliers in his hand. He looked angry. It was exactly what Jack wanted.

Jack and Holly had three young children and lived in a nice neighborhood. Holly worked as a teacher and Jack worked as a cop.

They kept a busy routine and cherished their rest and downtime. So when new neighbors moved in and threatened their routined life, Jack wasn’t going to go down without a fight.

Their new neighbors were a quiet middle-aged couple with no kids. When they first moved in, they seemed like lovely, genuine people.

But soon, their nonsense shenanigans would leave Jack no choice. He would have to mix business with pleasure and teach his unassuming neighbors why you shouldn’t mess with a cop.

Jack and Holly suffered through two weeks of their new neighbor’s floodlights being on 24/7. They hoped they’d remember to turn them off but now, they had to say something.

The floodlights were positioned just outside their bedroom window and their curtains failed to block them out. They couldn’t sleep. But when Jack finally asked them to turn them off, he was shocked by their response.

They refused to accommodate them. Jack learned that the man’s wife seemed to be afraid of just about everything.

She left the floodlights on over their garage door to combat her fear of the dark. But Jack knew that the floodlights couldn’t be seen from inside their house. He wouldn’t take no for an answer.

Another week passed before Jack tried again. This time he even offered to pay for a timer so that it would turn on and off at a more agreeable hour and they wouldn’t have to do anything.

When that failed, Jack took matters into his own hands. He was done with tiptoeing around these irrational people. What he did next took guts.

Jack waited until they were both gone. Being mindful to avoid suspicion, he moved the security cameras around their house and waited until nightfall.

As a cop, he knew what to look for and how to cover his tracks. The last thing he needed was for them to discover that he was the one behind this elaborate scheme.

Jack grabbed a ladder and loosened the lights just enough so as they wouldn’t turn on. Six months passed before the neighbors even realized they weren’t working.

Jack watched as his neighbor fixed the lights again. Then he waited two more weeks before he did the exact same thing. But this time, it would end differently.

Another 3 months passed before the neighbors noticed the lights weren’t working again. Jack watched as his neighbor grabbed a ladder and tightened them once more. But this time, he could sense something was off.

Suddenly, Jack heard someone banging on his front door.

It was him. He still had a pair of pliers in his hands. He asked Jack if he ever had any problems with his outdoor lights.

Thinking quickly, Jack responded, “Yes, as a matter of fact, I do. They loosen up occasionally and I have to retighten them. I blame it on the vibration from the traffic on our street”. But he wasn’t buying it.

The neighbor’s eyes narrowed. “Really? Vibration from the street? Do you really expect me to believe that?”. He became visibly angry.

“It’s funny how all this has unfolded. You really wanted those lights to go and now, I find out that there’s actually a problem with all outdoor lights?”. Things were reaching a boiling point.

“Listen man”, Jack said. He took his belt and handcuffs that hung on the coat rack beside him. “I’m a cop. If you’re accusing me of something here, I’ll be happy to take you down to the precinct and we can talk this out”.

The man hesitated. He had no idea Jack was a cop. Suddenly, his demeanor changed.

He switched from angry and confrontational to calm and understanding in the blink of an eye. He told Jack that he wasn’t accusing him at all and it was just a misunderstanding.

Jack continued “I eventually stopped tightening my lights and just left them off. They became a real nuisance”. Jack smiled and waved the man off. But was the ordeal finally over?

Eventually, the man did the exact same thing and left the lights off. Jack wondered how heated the situation would have gotten if he didn’t play his cop card.

Overall, he was happy with how the situation played out and had quite the story to tell to his family and friends at dinner parties.

They managed to avoid disrupting the peace in the neighborhood and learned to live with each other thereafter in peace.

The new neighbors never bothered them again but remained civil and would say hi and wave any time they passed each other. Thankfully, no one needed to get the cops involved because Jack already was one!