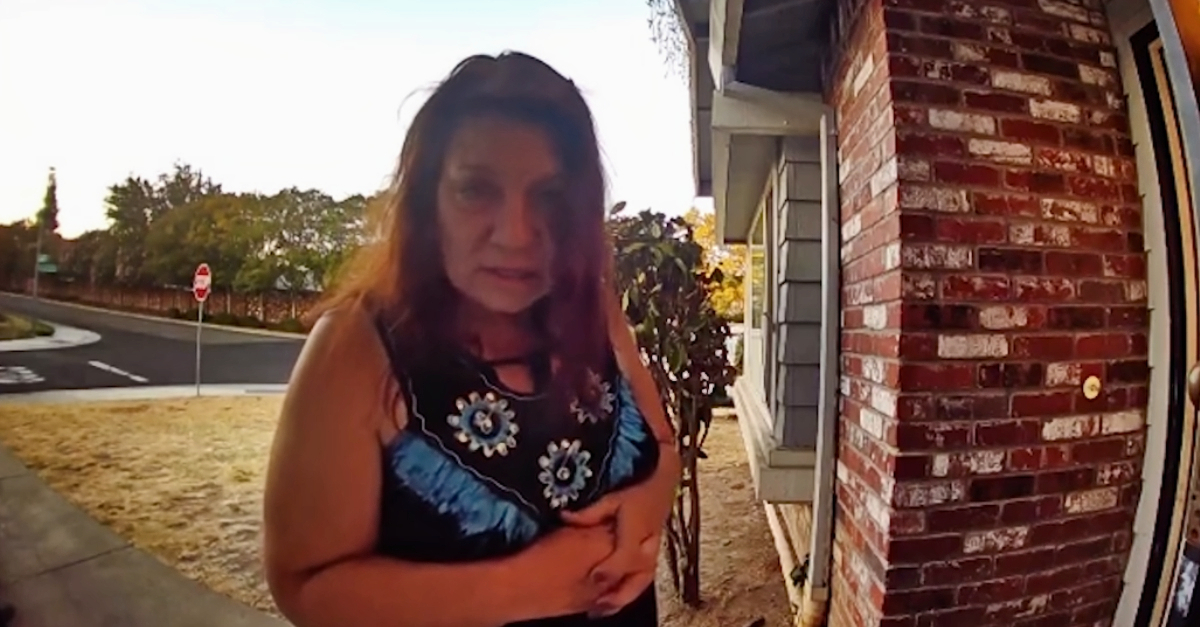 When she first spotted the woman looking in through her window, she presumed she was just making sure someone was home before ringing the doorbell. But when she left without a sound, Talia knew something wasn’t right.

She set up the camera hoping to catch her in the act. Instead, she was completely caught off guard.

Talia Kepler had two daughters; nine-year-old, Simone and one-year-old, Justine. And as a single mom, raising them wasn’t easy.

Talia worked two jobs to ensure her kids could live comfortably, but it came at a cost. Working as a saleswoman during the day and a telecommunicator in the evenings, she was running on fumes.

They lived in a comfortable house in a friendly and peaceful neighborhood. Everyone seemed to be polite and kept to themselves, except for one lady who would soon put Talia’s patience to the test.

It was hard for Talia to get a moment to herself so when someone threatened to take that away from her, all hell broke loose.

When Talia first noticed the woman lurking around her house and peeking through the windows, she presumed that she wanted to talk to her.

Talia waited for a doorbell but it never came. She got up from her desk and opened the door to speak to the woman, but when she looked around, no one was there.

When the woman came back again the next day and did the very same thing, Talia began to feel uncomfortable. Was she just trying to spy on them?

Talia clocked out of her telecommunications job at her work desk at home and once again, waited for the woman to ring the bell. But instead, she heard rustling at her doorway.

Talia walked to her front door and opened it. In the distance, she saw the back of the woman, walking away. She yelled at her but it seemed like the woman didn’t hear her.

Talia looked around her doorway, wondering if she left something for her. But nothing was there. Suddenly, Talia heard a voice call out to her.

It was her next-door neighbor. He greeted her over the fence and asked her how she was keeping but Talia had a more pressing matter on her mind.

“Did you see that woman at my door? Do you know who she is?”, she asked. It was then that the man said something that rendered Talia speechless.

Apparently, he saw that woman returning to her house almost every day for a week, peeking inside and standing in her doorway.

There was no way this woman wasn’t looking to cause trouble. But before Talia could confront her, she wanted to know what on earth she had been doing around her property. So, she set up a security camera.

The next day, the security camera company called over and installed her front door camera. Talia also updated her security alarm system, feeling unnerved by the strange woman.

Talia waited for a couple of days before she watched the tape. She wanted to know exactly what this woman was doing trespassing on her property every day. But she could have never guessed what was coming.

Talia put the girls to bed and went back to her laptop. She should have been exhausted, just like every other night but this night, she felt a rush of fear and nervousness wash through her.

She opened her security camera file and hit play.

Talia sat on the edge of her couch as she saw the woman appear on screen, walking up from the street. She was older than she thought she was.

Talia watched confused as she approached the door, then hesitated and continued to look through the windows. Then she reappeared at the door, looked at the camera, and started talking.

Talia laughed in relief at the woman. Who was she?

Talia didn’t recognize the woman at first but the longer she looked at her, the more she remembered she had met her before at the convenience store nearby.

They chatted after discovering they were neighbors. Talia remembered talking to the woman for a while. It was a stressful day that day and she told her more about her life than she usually would.

The woman named Christina had pressed the doorbell a few times but it never rang. She knew Talia was a single mother who kept a seriously busy schedule.

When she received no answer, she simply thought to come again the next day. She wanted to invite her and the kids to taco night and today was her last chance.

Talia sighed a breath of relief at finally understanding the situation that had become such a cause of concern. Every time Christina reappeared, Talia would get more and more creeped out by her actions.

Little did she know, she was just a thoughtful, friendly neighbor who wanted to invite Talia and the girls to a home-cooked meal!