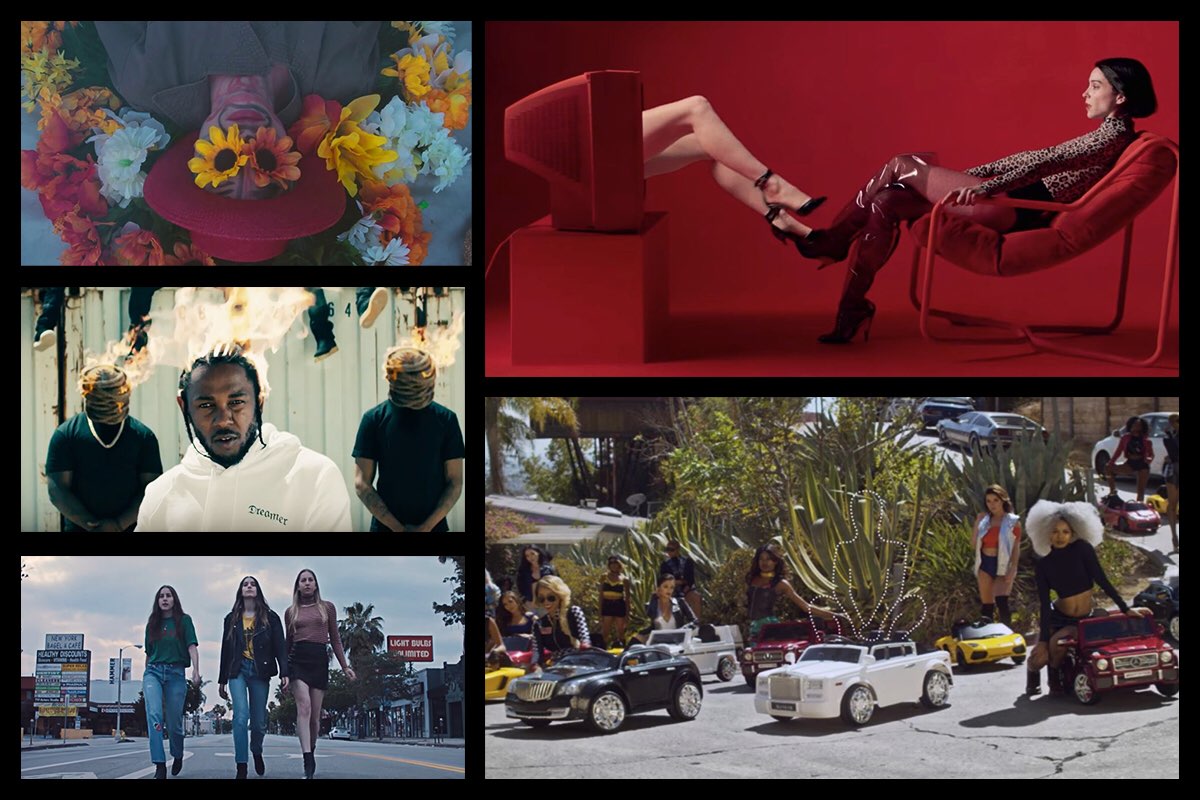 As 2017 wraps to a close, has video killed the streaming star? With services like Spotify and TIDAL putting increasing emphasis on videos, and Instagram clips more likely to sell records than a radio single, artists are putting increasing attention on visuals.

At the same time, you can now shoot exceptional quality videos on inexpensive gear, with cheap software and apps like FiLMiC Pro, so even independent artists can produce something extraordinary. And boy were there some extraordinary videos this year! Without further ado, here are the Top 5 Music Videos That Blew the Roof Off 2017.

Proof that a big video doesn’t require a big concept, Haim simply walks down the street in their stunning video for “Want You Back.” It’s a great touch for a group that shows so much personality through simple dance moves and timing. HAIM is a fun band to watch live for their expressions alone (google Este’s “bass face”), since they always look like they’re having fun even when they’re deadly serious, and this video gives you the same feeling through superb camerawork.

4.) Send Medicine – “She Believes in the Devil”

Actress Nouel Riel stars in this beautifully shot video from independent psychedelic rock band, Send Medicine. The video starts innocently enough, with Riel emerging from a bag in the middle of the desert, but throughout its runtime the clip begins taking subtle turns towards the occult.

By the time the song hits its outro, all bets are off. The members of Send Medicine (who co-directed this themselves) are seen so briefly, you may miss them. Most videos that look this good come with big label money (see #2 on this list), but “She Believes in the Devil” stands out for being this good on a budget. Watch it in 4K.

Let’s be clear about one thing: St. Vincent has her aesthetic down. Continuing the Apple commercial color palette seen on previous videos like “New York,” the Red Bull-sponsored “Los Ageless” is as minimal as it is extravagant.

St. Vincent looks confident and effortlessly cool even as she eats slugs and gets her face pulled. While her album MASSEDUCATION leans more heavily on synths and drum loops than guitar riffs, she still makes it a point to feature her Ernie Ball signature guitar, which looks gorgeous in white.

As somebody used to working with diva rappers, I can sympathize with the tone of Ryan Staake’s genius video for “Wyclef Jean.” As told throughout the video in simple text, the director of the film never actually met Young Thug, who didn’t arrive in time for his $100,000 video shoot. The video instead features a hilariously on-brand recording of Young Thug explaining the concept of the music video (“I wanted to do kiddie cars, like what you buy kids”) while the crew tries to salvage what they can in B-roll and other footage.

It’s clear that despite Young Thug’s absence, everybody involved made the most of the situation. The extras destroy a cop car, some kid from Mississippi had the best day of his life, and it’s the most clever use of the word “Juxtaposition” I’ve ever seen. In an age where most labels are trying to do more with less, kudos to 300 Entertainment for just releasing this instead of burning another $100,000 on a reshoot.

When you’re the biggest rapper in the world, you should make the biggest video, too. Played in every sports stadium and frat party throughout 2017, Kendrick Lamar’s “Humble” music video pulls no punches. You’ve got Pope Kendrick, Walter White Money Pile Kendrick, Fisheye Kendrick, The Last Supper Kendrick and even Kendrick with his hair on fire to complete a series of GIF-worthy spots that could be a master class in viral marketing for the age of memes. When he references the original Grey Poupon commercial, he’s just showing off.

Kendrick is at the height of his powers right now, as important to culture in 2017 as Eminem was in 2000, and just as likely to offend. But with nearly 400 million views, he’s clearly hitting all the right notes.

What were your favorite music videos in 2017? Let us know in the comments below!