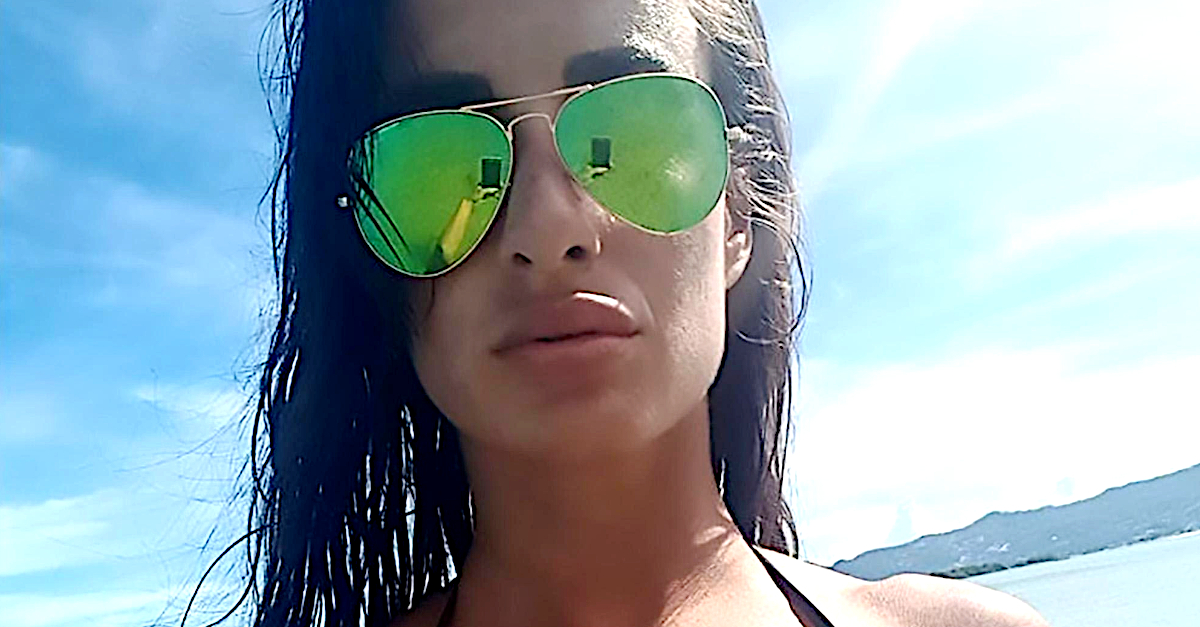 She tried to swallow her tears and her voice grew hoarse, “I don’t…understand?” The young lifeguard sneered at her, pointedly looking her up and down with disgust before commanding her to get out of the water, now.

Madelyn didn’t understand what she’d done wrong. She self-consciously covered herself up with a towel and started to gather her kids. But then, she decided against it. She’d been bullied her whole life, and she wasn’t going to stand for it today.  “And what if I don’t?” she shot back, defiantly. Then, the police arrived.

Madelyn Scheaffer from Odessa, Missouri, was a dedicated mother who did everything she could to make sure her family was taken care of. But, when she reached her mid-30s, something happened that paved the way to a realization that had shattered her world.

And now, seven years later, these nasty teenagers at the waterpark were trying to undo all her hard work.

Forced To Make A Decision

In 2005, Madelyn made a startling discovery about herself that forced her to re-evaluate her life. She was suffering from a slipped disc when she leaned over to run herself a bath, but she slipped and fell into the tub.

Her body had been taking a huge toll due to her lifestyle. Until, one day, it just couldn’t anymore.

Emergency workers rushed to the scene, but Madelyn was in too much pain to be moved and sent them away. She lay in the tub for three days. But, as she lay there, a quiet calmness washed over her.

“That should have been the first sign for me that I needed to lose weight, but it took me another year before I made the decision to do something,” Madelyn said.

But now, at 43 years old, Madelyn was back in that awful place. Shattered and mortified, she logged into Facebook with tears of indignation still rolling down her cheeks. How dare they?!

It had all begun on one particularly hot day. Madelyn had decided to do something she would never have dreamed of doing before. She took the long-forgotten swimming costume out from its box and tried it on. She smiled at her reflection in the mirror — it fits perfectly!

But she never expected the day to end with shame and an epic battle for her rights. They had all underestimated her.

Now, Madelyn was a tall and curvy woman, but she didn’t see anything wrong with her bikini as she tied it up and pulled her dress down over it. She gathered her family up for a surprise outing to Adventure Oasis Water Park to cool off.

But when she walked to the pool and pulled her dress over her head, she became aware of the park employees’ eyes burning a hole into her back.

Was She Hearing Correctly?

Feeling a bit self-conscious, Madelyn sat down again and covered herself with a towel. She looked around and made a note of all the scantily-clad bodies — young and old — all around her.

Out of her comfort zone but determined to enjoy herself, she cracked her warmest smile at the two teenage employees who were giving her the side-eye. When they smirked back at her, she couldn’t have guessed what they were about to do out of pure spite.

Madelyn mentally prepared herself and dropped her towel again. Looking around, she sat down and slid into the cool water. She closed her eyes and focused on the sensation of the cool water swirling around her and began to relax.

But, not five minutes after she had gotten into the pool, the two female staff members approached her.

What had these girls just said to her? Madelyn’s face flushed. She was so taken aback that she couldn’t quite process the words. Were they telling her to leave? What had she done?

Squinting up at them through the glaring sunlight, she asked them to repeat themselves, just to be sure she was hearing correctly. And what did they have to say about her bikini?

Not satisfied with the water park employee’s answer, Madelyn insisted that they tell her the real reason why she was being singled out. She had a suspicion, but in this day and age, she didn’t really think that it couldn’t possibly be true.

Even though she had mentally prepared for this, she was still furious when they came right out and said it.

One of the girls, sighing, rolled her eyes as she repeated herself. Towering over the mom in the pool in a display of power, she facetiously informed Madelyn that her bikini bottoms were “too small” and that they were “inappropriate.”

She smirked knowingly at Madelyn. “This is a family park,” she sneered. But that couldn’t be right?

Madelyn felt mortified, but then she stopped herself. She knew that she was wearing “full” bikini bottoms, how dare they say otherwise! She looked around in confusion at all the other girls at the water park.

Her blood began to boil when she saw that most of them were showing a lot more skin than she was. There was something very wrong with this picture. She wasn’t buying it.

Madelyn’s emotions ran wild, fighting each other on her face. She felt a profound sense of shame and embarrassment that the young employees were commenting on her body. She felt totally violated. But then, she stopped herself. Now, she was angry. She knew exactly why they were picking on her.

“I was embarrassed for a second, and then it was no, no way,” she said. It was time to fight.

At 43 years old and weighing 170 pounds, Madelyn was looking fitter and feeling more confident than ever. She had shed over 100 pounds and had kept it off. Sure, her body wasn’t perfect.

But these nasty girls were trying to kick her out of the water park because they were jealous! That was the only logical explanation.

“My body is different than the young girls that were walking around in their bikinis, but why should I be made ashamed of my body?” Madelyn said. “I am comfortable in my bikini. I am happy with who I am. My first reaction was why are you singling me out? They said that my bottoms were inappropriate. That was funny to me because they are full-size bottoms.”

But what was she going to do about it?

Madelyn turned to face the staff members who were still looking her up and down, accusingly. If the incident at the water park had happened years before, she said, the normally shy woman may not have had the courage to stick up for herself.

But she knew she had to take a stand. She was clearly being singled out.

But the women wouldn’t let it go. They said that Madelyn had two options. She could cover herself up with a pair of shorts, or she could leave the waterpark. Madelyn, now incensed, asked to speak to the supervisor on duty.

“Well I am not covering up, Madelyn said, enraged. “And if you expect me to leave, you had better call the police and have them escort me out.”

The officers arrived, and to Madelyn’s dismay, booted her from the waterpark! “Fifteen minutes later the police did arrive and said that while they did not agree, they had to do their job. “We can’t actually say anything,” they said as we walked outside… but I hope from the expressions on our face you can tell how we feel,” Madelyn wrote on her now-viral Facebook post.

“They were compassionate. They, too, thought it was ridiculous.”

“I am a 43-year-old woman who did not have the confidence or the body, to put on a bikini until [I was] 40 years old,” Madelyn continued on her post. “I will not be discriminated against because I look too good in one.”

She continued: “This was not a thong. It was a standard, summertime, two-piece, string bikini… the same as everyone else, who felt confident enough in their body to wear one.”

“I felt like it was both age and body discrimination and I felt like I could look around me and I could see a handful of other girls half my age, wearing the same size swimming suit and not being singled out and told to put on clothes or leave,” Madelyn said angrily.

But what could she do about it?

Since Madelyn wrote the Facebook post documenting how she was discriminated against at the waterpark, it has been seen by people all over the globe. And people were appalled by the staff’s behavior at the Adventure Oasis Water Park.

But, Madelyn knew that online naming and shaming wasn’t going to be enough to make them see the error of their ways.

“Long story short, I called the media, and will be on tonight’s local 41 news. Several people walked out while I waited outside for the newsman, and told me how ridiculous this all was, and complimented me on my swimsuit,” Madelyn wrote.

Meanwhile, her post gained more support than she could ever have imagined!

A Lot Of Attention

Madelyn took to Facebook to show her surprise and gratitude.

“In addition to other countries already mentioned, I have now heard from Greece, China, Hong Kong…and received over 500 beautiful letters from Brazil. I have been wanting to see the world, and now the world is coming to me, and sending much Love,” she wrote.

All Shapes And Sizes

“One thing I have learned so far is that there is a much greater viewpoint and perspective of the human body than what is to be found in Independence, Missouri worldwide… and I thank and appreciate you for that!” She continued: “Much Love to those who express pride over shame for all shapes, sizes, in addition to various ages and stages, of this beautiful human body we inhabit our time on earth.”

But what does Madelyn hope to achieve by highlighting the waterpark’s unfair policies?

“While I stand by my grievance that I was discriminated against at Adventure Oasis Water Park,” and I do not believe it should happen again,” Madelyn wrote.

“It is not money that is going to correct the issue, but a change in the swimming park’s “appropriate swimming attire” policy, and also an improvement involving better education and orientation of their park management.”