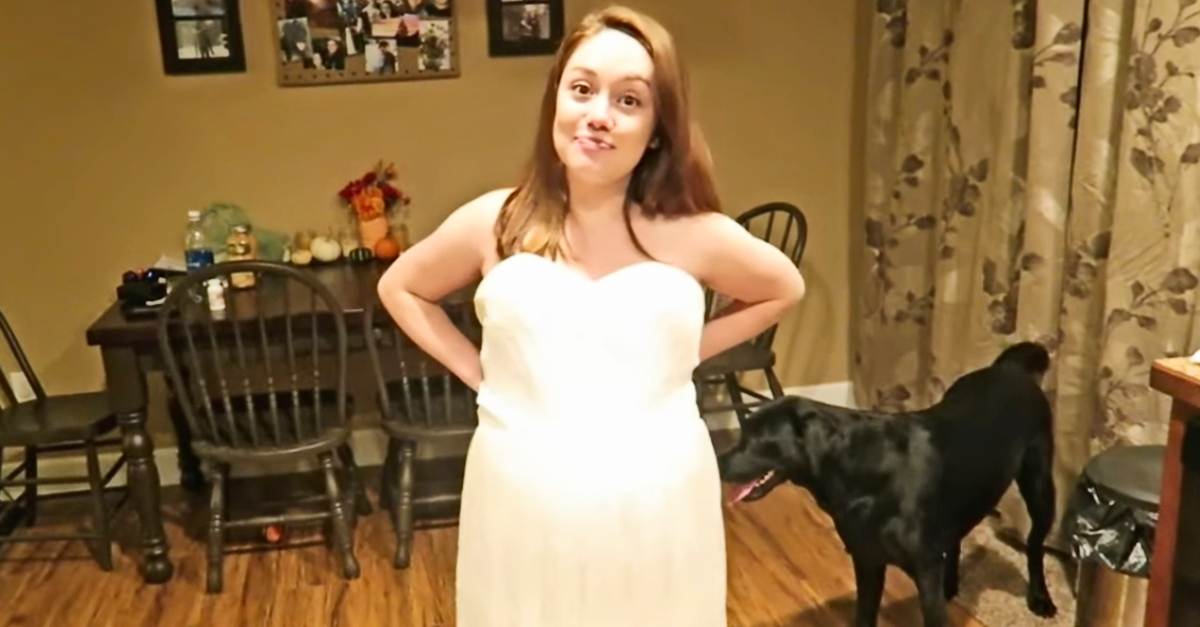 Kelly was frowning down at her phone as she read her mother-in-law’s text. She told her that she had to pick a different wedding dress, or her entire family would not attend the wedding.

Feeling defeated, Kelly agreed to find a different dress, only to see her mother-in-law show up in the exact same dress she told Kelly not to wear. Kelly could not contain her anger. She was going to make her mother-in-law pay for what she had done.

When Kelly Barker met Colin Lewis, she knew she had met the man she was going to marry. He was kind and considerate, honest and hard-working. It was hard not to fall in love with him.

She remembered thinking that he must have been raised right. So, imagine her surprise when she found out that his family were nothing like him.

Kelly Barker was a well-liked woman with plenty of friends. She got along well with most people. Unfortunately, her fiance’s mom and soon-to-be mother-in-law was not one of them.

Kelly and Colin were in their early thirties and dated for two years before Colin popped the question. Kelly lovingly said yes, completely unaware of what she was marrying into.

Kelly had met her future mother-in-law a few times throughout the years. She always got the feeling that she didn’t like her.

Because of this, Kelly didn’t invite her wedding dress shopping. Instead, she sent her a picture of her chosen dress to make her feel included. It was a decision she’d later regret.

The dress Kelly sent her future mother-in-law was a beautiful flowy beachy-looking dress that had an embroidered corset detail on the waist.

She bought it from a local small boutique that both she and Colin loved. After sending the photo to her mother-in-law, Kelly expected to receive a nice text back. Instead, all hell broke loose.

She immediately wrote back and demanded she find another dress. Kelly thought she was joking until she followed up with a stream of hysterical texts.

Kelly flicked through the aggressive texts in disbelief. She made it obvious that she didn’t approve. Kelly wrote back utterly confused and asked her why but her response left her reeling.

When Kelly asked her why, she replied: “I don’t need to give you a reason. You should do what I say without questioning me. That dress is inappropriate“. But there was a secret reason – and it was wild!

Kelly’s mother-in-law was a very judgemental woman who cared deeply about keeping up appearances. She grew up surrounded by wealth and seemed to always get everything she wanted.

Kelly’s defiance felt a hard slap to her face. One that would send her spiraling out of control and into the arms of security.

Kelly got a call later that day. It was from her father-in-law. If she didn’t change the dress, the whole family would withdraw from attending their wedding.

Their wedding was a small group of 40 people. 15 of those people were Colin’s family who were acting completely unreasonable. Tensions rose between the engaged couple.

Colin begged his wife to be accommodating. His reaction brought her to boiling point. How could he side with his family? They were acting utterly out of line.

But her whole wedding was at stake. She didn’t want her future husband to have a wedding without his family there, but she also felt like she needed to stand her ground. Eventually, she made a decision that would come back to haunt her.

Kelly surrendered and picked a different wedding dress. The in-laws came to her wedding and everyone was playing nice – until Kelly saw what her mother-in-law was wearing.

The reason why her mother-in-law forbade her from wearing her previous wedding dress became abundantly clear. She had bought the dress herself but in a different colour.

According to her, if she wore the same dress as her, “everyone would think she’s pathetic and copying her son’s wife on her wedding day”. She couldn’t have that.

Kelly marched up to her mother-in-law with a rage so consuming she felt like she could spew hot lava from her pores.

“How dare you! This is why you didn’t want me to have my dream wedding dress? Because YOU wanted to wear it to my big day?!”, Kelly spat. A crowd began to form.

Kelly’s husband now had no choice but to acknowledge the disrespect his own mother showed to his wife. Even he could no longer excuse her childish behavior.

Kelly stepped away and tried to ignore her for the rest of the day, but she couldn’t deny it – she was ruining her wedding day. She had to do something.

Kelly should be surrounded by people who loved her and Colin equally and who wanted to celebrate their union in a joyous and unselfish manner. But her mom-in-law was making her feel small.

After dinner, she pulled Colin aside and confided in him. What they did next astonished everyone.

Colin understood where Kelly was coming from and couldn’t help but agree with her on her point of view and how his mom was acting.

They agreed to approach his mom and ask her to leave now that the meal was over. However, she didn’t go quietly and made quite the scene!

When she eventually left, she brought most of Colin’s family with her. Although Colin was devastated to have to ask his family to leave, he couldn’t condone their behavior any longer.

She explained the story online and asked Reddit users if she was wrong for doing that. After all, if she was small-minded about the whole situation, she wanted to be able to address her wrongdoing and apologize. These people were now her family.

There was no getting away from them now. But here’s what Reddit users said.

One comment said: “You can wear whatever you want. But at some point, you might need to think if this dress is more important than your wedding and your relationship with your in-laws.”

Another concurred, saying “I agree with this, but mom-in-law and her family are ridiculously overreacting.”

However, another user had words of warning to say to Kelly. “With how crazy all these people are, she should rethink even marrying into this family. These people are nuts and will make her life a living hell”.

This last piece of advice would end up resonating a mere 6 months later – when the dreaded mother-in-law would strike again in a way no one would ever imagine.

Despite the warning to run away from the crazy family, Kelly and Colin were determined to let love win.

And since they lived miles away, they managed to settle into their new life without having to see much of the crazy mother. That is until Kelly’s parents had a big celebration to announce.

It was their 40th anniversary.

The idea was to have lots of family, food, and dancing. Verbal and digital invitations were sent out and Kelly was already forming a few amazing plans in her head – one of which involved a short video tribute. Suddenly, Colin came into the kitchen looking troubled.

His mom had called him. He had tried to tell her he wouldn’t be able to visit because of the anniversary.

The conversation turned sour quickly, with his mom saying it was rude that she hadn’t been invited – they were all family after all. Kelly’s eyes turned wide. Was she serious? She could already predict what horrible drama could unfold.

After many long conversations, a deal was struck – Colin’s mom could come, but that was it. There was just no room for anyone else from that side of the family.

Kelly’s parent also told Colin that they wouldn’t stand for any nonsense. The big day rolled around, and people filtered into the recreation center that had been decorated in a vibrant, fun Hawaii theme. When Colin’s mom came in, Kelly’s blood boiled.

Overdressed, And Then Some

There she stood, wearing the same dress she had worn to the wedding. And that wasn’t all.

Despite the call for a casual dress code there she stood as if she was waiting to walk down the red carpet – a full, elaborate updo, evening makeup, and extravagant jewelry. The woman stood out like a sore thumb, but the smirk she wore was even more apparent.

Colin flashed an apologetic glance at Kelly. Kelly’s parents shook their heads and went back to greeting other family members.

The mother-in-law went straight for the front table and took a seat right where Kelly had been placed. The look of indignance was at nuclear levels when she was asked to relocate – to another place. But the horrible actions kept rolling in.

There were games, speeches, and heartfelt gifts. Kelly’s tribute video had taken days, and she was so proud of it. It brought streams of tears from everyone in the family.

But through it all, Colin’s mom sneered and rolled her eyes. She would also lean over and whisper things to those seated near her.

Apparently, she was boasting about her own anniversary parties and how tacky it was to have a beach theme. And those were just a few of the insults she was tossing out.

It didn’t take long for the entire clan to look like they wanted to strangle her. Finally, Kelly’s dad stood up and took went straight to her.

“If all you came here to do was be rude, you can leave. My daughter might have had no choice in tolerating your behavior during her wedding, but we don’t have to put up with it.”

Colin’s mom stood up, her face red with rage. She opened her mouth, but Colin interrupted. “Mom, just go. You’re not wanted here.” The rest of the family’s response was unbelievable.

While a few others shouted similar sentiments, the entire family applauded at the mother-in-law’s departure with huge applause.

Colin switched off his phone as furious texts poured in. “At least I have one set of great parents,” he said to Kelly’s mom and dad. They gathered for a huge group hug. The rest of the celebration was amazing. And they were all in agreement, that woman would never be invited to anything ever again.