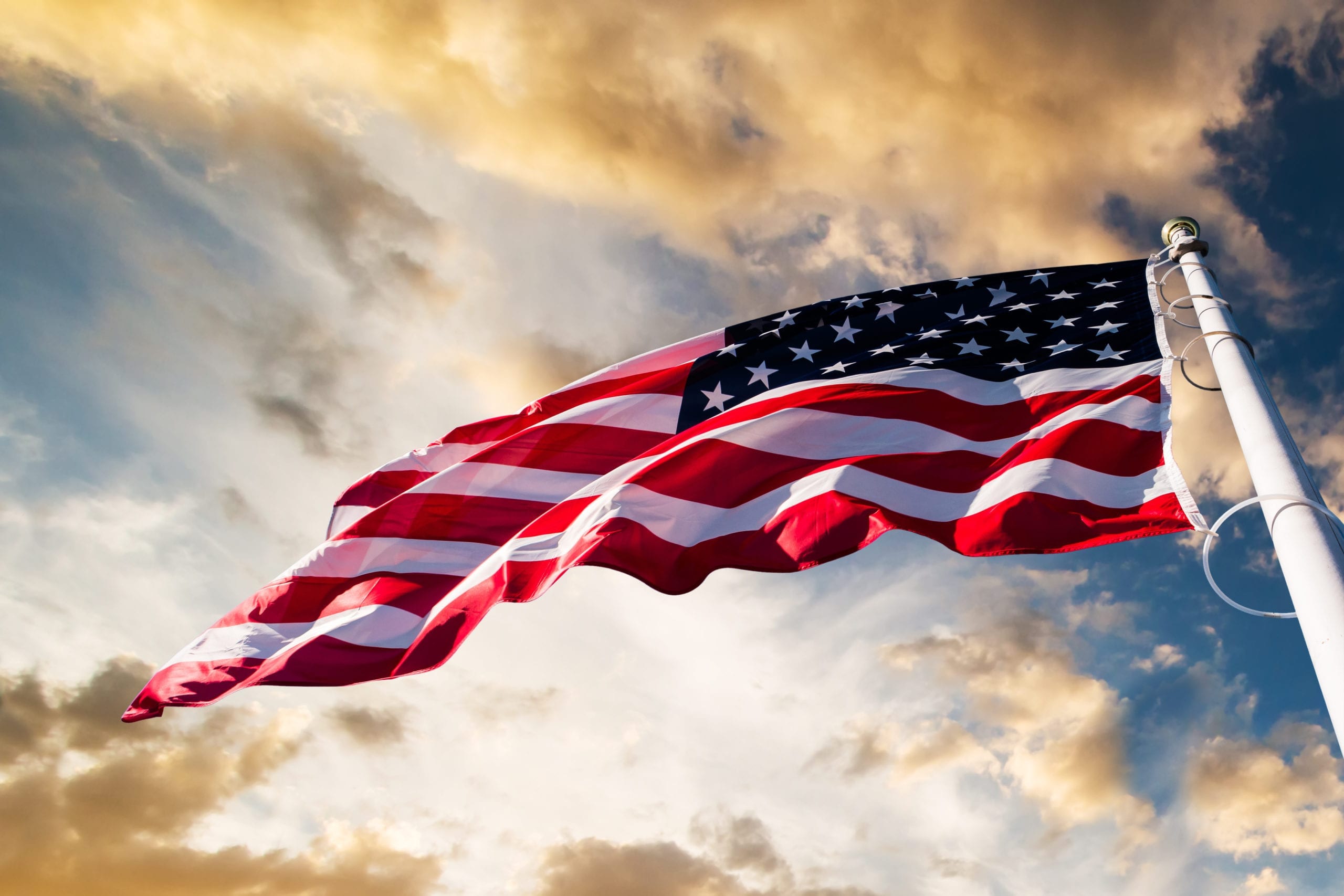 Famous flags belong to famous countries. There are many of them with beautiful designs. However, some flags are more famous than others. In the world of about 7.2 billion people, it is tasking to come up with the most popular flags, but we did it for you! Let us take a look at 10 most popular flags of world.

Flag of the United States of America has 13 red and white stripes that are horizontal. In addition, a blue rectangle on the left corner that carries 50 stars. Each star represents the 50 states that form the United States of America. It should be noted that the 13 red and white stripes are symbolic. They represent the 13 colonies of Britain that proclaimed independence from the kingdom. In fact, those 13 colonies became the first US states. The US flag has been officially altered 26 times from the time of its first use in 1777. Finally, the current 50-star flag was endorsed in 1960 and it is the long time-used version.  The United States in the 3rd most populated country but has by far the most popular flag in the world.

Next, is the Betsy Ross flag. It is an early design of the flag of the United States. In fact, it was named after an early American upholsterer and flag maker, Betsy Ross. The pattern of the Betsy Ross flag is 13 alternating red and white stripes with stars in a field of blue in the upper left corner.

Another version of the American flag, the Bennington flag. It is associated with the American Revolution Battle of Bennington, from which it derives its name. Importantly, its distinguishing feature is the inclusion of a large ’76’ in the canton, a reference to the year 1776 when the Declaration of Independence was signed.

The Gadsden flag is a historical American flag with a yellow field depicting a timber rattlesnake coiled and ready to strike. Positioned below the rattlesnake are the words, “DONT TREAD ON ME.”  Whereas this version is with the 50 States US Flag.

The First Navy Jack was the naval jack of the United States from 1975 to 1976 and again from 2002 to 2019. It was authorized by the U.S. Navy and was flown from the jackstaff of commissioned vessels while moored pierside or at anchor. Now, it is only used as a naval jack by the oldest active warship in the U.S. Navy. The design is traditionally regarded as that of the first U.S. naval jack flown in the earliest years of the United States’ existence. Although, this is disputed by the historical record.

Buy Flag of the United Kingdom

The Royal Navy is the United Kingdom’s naval warfare force. Warships were used by the English kings from the early medieval period. The first major maritime engagements were fought in the Hundred Years’ War against the Kingdom of France. The White Ensign, at one time called the St George’s Ensign due to the simultaneous existence of a cross-less version of the flag, is an ensign flown on British Royal Navy ships and shore establishments. It consists of a red St George’s Cross on a white field with the Union Flag in the upper canton.

Next, is the St. George’s flag. It has a white background included with a red cross on it. It was adopted by England and the City of London in 1190 for ships entering the Mediterranean to benefit from the protection of the Genoese fleet. As a result, the English Monarch paid an annual tribute to the Doge of Genoa for this privilege.

One of the most inspiring flags in the world is the French flag. It has three upright bands with blue, white as well as red colors. Many countries have copied this three-color scheme. This is why the French flag is one of the most popular flags in the world.  It is believed that the majority of three strip flags have taken a cue from France. According to the website of the country, the white color represents the king while the red and blue are the traditional colors of Paris, its capital. These colors (white, red and blue) are also associated with the slogan of the revolution – blue for freedom, white for equality and red for brotherhood.

The Russian flag is one of the most famous flags in the world. It is similar to the French flag, as its design is white, blue and red. However, the three colors are arranged horizontally with the white on top, followed by blue in the center and red at the bottom. It was initially used as an insignia for merchant ships. In 1696, it became the official flag of Tsardom of Russia. It remained until 1917 when USSR was formed. During this period, the flag was a red field with a gold hammer crossed with a gold sickle beneath a gold-bordered red star. Athough, when USSR was dissolved, the previous tri-color was introduced in 1991 with its full adoption in 1993.

The Mexican flag is one of the most famous flags in the world. It is also tricolor with three vertical colors of green, white and red. The coat of arms of the North American nation sits at the center on the white color. The first flag was produced in 1821. In 1968, the design was reviewed to create a version that has been used since then up until now. The colors were endorsed after the independence from Spain. The meaning of the colors have been altered over time and many alterations have been made to the flag. In 1968, when Mexico city was hosting the Olympic games, the current version was adopted so that it wouldn’t look like the flag of Italy.  The Mexican flag is one of the most popular flags in the world.

The flag of the people of Japan is a white rectangle with a red circle at the center. It is known as Nisshõki, officially meaning sun-mark flag. While commoners call it Hi no maru, which means, the circle of the sun. The sun is an integral part of the Japanese tradition. They believe that the Emperor is the direct descendant of Amaterasu, the goddess of the sun. As a result of this, the flags design shows the great significance of the sun. However, this creed is no longer officially state-sponsored.  The flag is simple and distinct and is one of the most popular flags in the world.

Following, is the second most populous country in the world. That being said, it wouldn’t be right to leave out the flag of India. It is one of the most famous flags in the world. There are three horizontal colors of saffron, white and green. In addition, the center of the flag is a wheel of 24 spokes. The current version was adopted on July 22nd, 1947 while on August 15th, 1947, it emerged as the official flag.

The Turkish flag is gorgeously designed. It stands out with a red background and a white star and crescent. It is generally referred to as, Al Bayrak, which means the red flag. In the national anthem, it is called, Al Sancak, which means, the red banner. The present design was an adaptation of the late Ottoman flag. It was used in the late eighteenth century and finally recreated in 1844.  Turkey is the tird most populated country in the middle east but is the most popular flag of the region and one of the most popular flags in the world.

The Brazilian flag is known as, A Auriverde. In Portuguese, this means, ‘The Yellow-and-green One’. The flag contains a green background that is overlapped by a yellow rhombus. Additionally, there is a blue disc overlapping the yellow rhombus at the center. The flag was officially adopted on 19th November 1889, four days succeeding the declaration of republic. It was designed by, Raimundo Teixeira Mendes and assisted by Miguel Lemos, Décio Villares, and Manuel Pereira Reis.

Lastly, the flag of Canada is one of the most famous flags in the world. In fact, it is informally called the Maple Leaf. Designed by George F. G. Stanley, it has a red background with a white square overlapping it. Along with a red maple leaf sits at the center on top of the white square. On the 15th day of February, 1965, the flag was officially unveiled. Certainly, that date was set aside as their annual National Flag Day.  Three North American countries made the top 10.  Canada rounds out the most popular flags in the world top 10.

Also Read:  Things to Do As We Begin to Ease the Lockdown

The Meaning of Flags

A recent chart from Just the Flight looks at some the world’s most iconic flags. Thus, the intricate stories and ideals that can be found in their designs are very interesting.