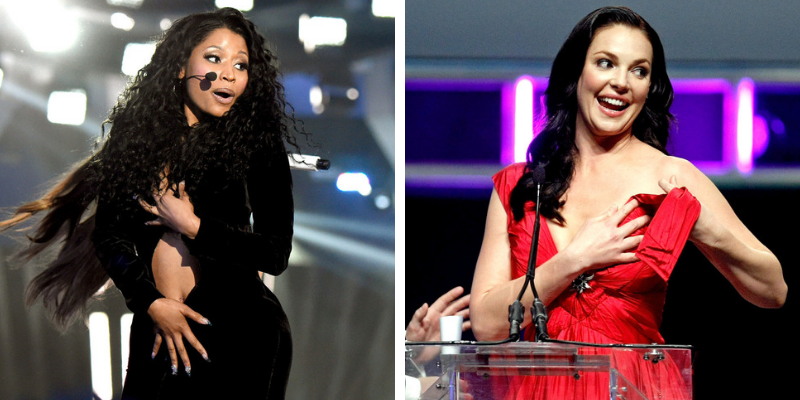 Celebrities have to be creative to get attention. While the camera’s eye is trained on them every time they step outside, it’s only the most daring designer fashions that get clicked. Sometimes the camera catches beauty and grace, but the photos that really make headlines are those that capture wardrobe snafus.

These wardrobe malfunctions are still a reminder that celebrities are just like us though. We all have our good and bad days, no matter how famous we might be.

Keep on reading to discover the wardrobe malfunctions those celebrities suffered from—and how some of them gloriously saved themselves from them.

Bond girl Sophie Marceau is classy, elegant and usually pretty unflappable. But in 2005, her dress made any attempt at calm sophistication impossible.

She strolled the red carpet at the premiere of “Where the Truth Lies” during the Cannes International Film Festival, and down came the strap of her dress, exposing way more than she had planned. Upon reflection, it’s staggering how many celebrity dresses seem to fall apart in public. A conspiracy by designers to get their dresses photographed? Scandalous.

Nicki Minaj isn’t known for being shy, but when she exposed her nipple on the stage while performing on “Good Morning America” in 2011, everyone choked on their morning coffee.

There were rumors that the wardrobe malfunction was staged, but Minaj denies these claims. She would “never, ever” do such a thing on purpose. Maybe she’s telling the truth, maybe not. If she is, she should consider wearing clothing that isn’t four sizes too small, so the odds of a nip-slip are reduced to almost nothing.

It was quite swanky—until Reid showed up and flashed a boob to everyone. As she stood posing for pictures, the dress just opened up, the strap slid off her shoulder, and there it was. Reid later commented that the public unfairly reacted as if she’d committed a crime. Well, public nudity is illegal in some states. Just saying.

Who can forget the nipple that was seen around the world—again and again and again. Intentional or not, Janet Jackson can’t live down this wardrobe malfunction.

At the infamous Super Bowl XXXVIII Halftime Show in 2004, Jackson gave the live audience more show than they bargained for when part of her costume fell off in Justin Timberlake’s hand, exposing her right breast. What’s a little boob, you ask? Well the Federal Communications Commission took CBS to court over the malfunction, seeking nearly $600,000 in fines. The fines were appealed and ultimately dropped.

It’s pretty tough to top having the entire world see your lady bits, and that’s why Britney Spears tops the list of most embarrassing wardrobe malfunctions.

In November 2006, Spears went through a club-hopping phase, and apparently an anti-pantie phase as well. One night, while out with veteran flashers Paris Hilton and Lindsay Lohan, Spears exited a car and showed far more than the world ever needed to see. Perhaps if she’d worn underwear, she might have avoided such an intense level of embarrassment.

We know a gentleman when we see one, and Alexander Skarsgård definitely fits the bill.

When Robbie was struggling with her unraveling dress at the European premiere of The Legend of Tarzan, he quickly came at her rescue.

Jennifer Lopez was putting a lot of emphasis on the shoes she was wearing on that day, but something else caught the attention of the media.

This was during the event showcasing, amongst other things,  her shoe collaboration with Giuseppe Zanotti in Beverly Hills.

We’d welcome a warm and tight hug any day of the week, except if we are on the podium of a major show in front of millions of people.

When Dakota Johnson wanted to receive her People’s award from Alison Brie and Leslie Mann, the latter hugged her so tight that it undid her sparkly crop top.

It is true that Britney Spears suffered many major wardrobe malfunctions over the years.

But seeing how long she has been performing live in front of audiences and how much movement goes into her choreographies, those incidents were bound to happen.

This one happened while she was performing in Vegas. We’re glad her backup dancers had her back (literally)!

Let us not be too harsh on Brtiney.

She’s giving her all on stage and it shows, even if it’s a bit too much.

Kim Kardashian never hid how fond she is of control underwear—she even has her own line of body shapers now.

Photographers caught a glimpse of one of her beige Spanx one day while she was walking around in Miami with her husband.

Bella Hadid was struggling with her red (gorgeous dress) at the premiere of the Unknown Girl (La Fille Inconnue) at Cannes in 2017.

She managed to stay classy during the whole ordeal though, and we salute her for that.

Anne Hathaway couldn’t escape the lenses of the cameras when she was wearing her Tom Ford gown.

It is always better to wear underwear.

When Heigl’s dress strap snapped during her acceptance speech at the ShoWest Award for Female Star of the Year in Las Vegas, the winner didn’t even have time to finish her thanks.

Quick on her feet, the female star of Fantastic Four quickly fixed her black dress’ strap going loose in the Us Weekly’s Hot Hollywood party in L.A. in 2006.

Other than this incident, the star’s dress fit her like a glove!

Women are not the only ones suffering from occasional wardrobe malfunctions.

While coming to the Suicide Squad premiere after-party in 2016, his belt wasn’t buckled to his pants’ loops correctly, which gave him a disheveled allure.

After we saw her appearing on Jimmy Kimmel’s show with a towel and a pair of jeans only, we were all taken aback.

It seems that the zipper of the dress she was planning on wearing snapped, leaving her with no choice than to improvise her outfit of the day.

She said, “You know, I’m a Missouri girl, and the show must go on.” We love the attitude!

We love it when a celebrity helps another one! When Aly Raisman spotted a wardrobe malfunction on Danielle Harrington at the red carpet at the Sports Illustrated Swimsuit Island event in Miami, she jumped to save her.

We love the big smiles both of them couldn’t contain.

While she looks stunning with her shiny short dress, Kylie still struggled to get out of her car without flashing anyone.

She was celebrating her sister’s 33rd birthday on that day.

Never trust a top with an open cut to behave.

While Halle Berry was strolling the red carpet for the premiere of ‘Kidnap,’ her new movie, her white shirt flew wide open, exposing her bra.