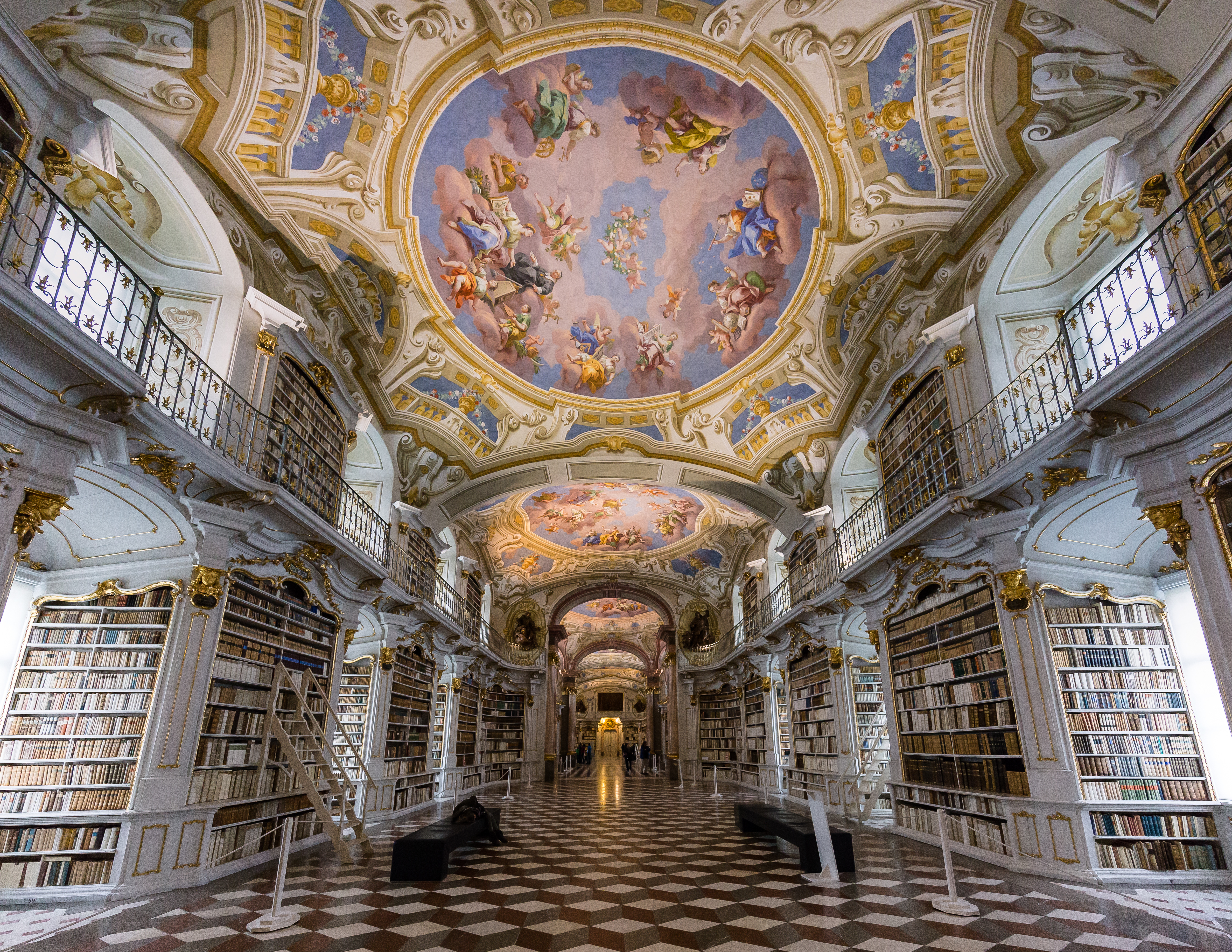 Book nerds, rejoice! We searched near and far for the most beautiful libraries in Europe and found them. If these charmers weren’t already on your bucket list, add them. We should warn you, though, don’t expect to get much reading done, as there’s far too much to explore and see in these halls (don’t forget to look up!). From the baroque to the classic, here’s our roundup of the top 5 most beautiful libraries in Europe:

This behemoth of classical architecture contains every book published in the UK over the past 400 years: a shocking more than 12 million books in total! The library isn’t just one building, but actually a series of buildings and underground passages including “Duke Humfrey’s Medieval Library” and the 15th century Divinity School, which was featured in the first Harry Potter movie. Notable pieces include Shakespeare’s First Folio, The Magna Carta, and an original Gutenberg Bible.

Admission is free for some rooms, and tours are available for purchase should you wish to see more. We recommend the extended tour of the reading rooms, which costs about $10.00 and covers The Divinity School, Convocation House, Chancellor’s Court, Duke Humfrey’s medieval library, Upper Reading Room and Radcliffe Camera.

Prague’s Czech National Library, also known as the Clementinum Library, was founded in 1722 as part of a Jesuit complex. An extraordinary example of baroque architecture, it’s clear to see why it ranks as one of the most beautiful libraries Europe.

The library is home to the most important works of Czech literature, as well as theological works in multiple languages. In addition to its collection of 20,000 books, antique globes and clocks adorn the main room. Trompe l’oeil frescoes highlight the ceiling and give it a domed appearance, and additional frescoes depicting The Science and The Art, The Temple of Wisdom, as well as important people of the Jesuit College also adorn the ceiling. There are two rooms, both equal in their beauty. The first is two stories. It features marble floors, and carved wooden Corinthian columns stand tall between bookshelves. A scalloped balcony with gilded rails align looms above from the far end of the hall. The second hall is just as majestic. It features wide-planked wooden floors and domed and frescoed ceilings. Similar to the first room, globes line the hall.

Admission is approximately $12.00. Guests are welcome to enter on their own, or join a guided tour.

Located in Coimbra, Portugal, halfway between Lisbon and Porto, The Biblioteca Joanina is one of Portugal’s national treasures and an obvious choice for our list of most beautiful libraries in Europe. This baroque gem was built in the 18th Century under the reign of King João V as part of his efforts to promote artistic, cultural and scientific endeavors across Portugal. In fact, when the rector of the University asked the King for help in funding the library, the King shocked him by telling him his request was far too modest and he should be asking for more money! The rector acquiesced, and the library was financed with gold reserves that had recently been discovered in Brazil.

Peter Lyden of the Institute of Classical Architecture & Art counts it among his favorite University Libraries.

Architect Gaspar Ferreira designed the library in the Baroque style in the 18th century during the reign of King João V. Its interior is comprised of three great rooms divided by decorated arches that are unforgettable; I was fortunate to spend time at the library as a visiting student in my youth. #favoriteuniversitylibraries #joaninalibrary #bibliotecajoanina #coimbra #portugal #portuguesearchitecture #traditionalarchitecture

The library is spread across three large salons with beautiful wooden gilt Chinoiserie bookshelves, tromp l’oeil frescoed ceilings, and arches decorated with the national coat of arms. The library is home to a collection of 250,000+ books (both handwritten and printed) on law, theology, and philosophy, among other topics; books date back to the 12th Century. What’s interesting to note about The Biblioteca Joanina is its book preservation system: colonies of bats live in the library, with the purpose of eating bugs that would otherwise destroy centuries of books.

The Admont Abbey is a Benedictine monastery in Admont, Austria. It is the oldest remaining monastery in Austria’s Styria region, and home to one of the largest monastic libraries in Europe. While the abbey was completed in 1074, the library was not completed until 1776. The library is an explosion of baroque color and features cavernous ceilings and expansive windows, causing it to be filled with light. Frescoes adorn the ceilings and depict the ideals of the Enlightenment. Marble sculptures stand erect in the hall; the most famous of these sculptures is a series called The Four Last Things which represent Death, the Last Judgement, Heaven and Hell. It holds more than 200,000 books, including manuscripts from the 8th century, with gilded bookshelves can be found throughout.

Entrance costs approximately $12.00, and visitors are welcome to explore on their own or join a guided tour.

Vienna’s Austrian National Library is the largest library in Austria and a stunning juxtaposition of baroque flair and traditional design. With its curvaceous walls, marble floors, ionic columns, imposing marble sculptures, and frescoed ceilings, it’s easy to see why this monument is one of the most beautiful libraries in Europe. At one end looms the statue of Holy Roman Emperor Charles VI, ruler of the Habsburg monarchy between 1711 – 1740. Built as a royal library in 1723, it is housed in the Hofburg Palace, the winter home of the Habsburg dynasty that ruled the Austro-Hungarian empire.

Travel and lifestyle blogger Marion Vicenta Payr of The Travel Blog counts it among her favorites, saying “The National Library of Vienna is a treasury often overlooked. Visitors and locals alike pass by on their way to the city center, but there’s so much to be discovered inside! From the over 7 million books in the collection to the grandeur of its architecture, the library a must-visit when in Vienna!”

#AustrianNationalLibrary The National Library in Vienna was founded more than 600 years ago and houses over 3,7 million books. This is just one of the many parts of the building, but probably the most famous one. The so called "Prunksaal" (could be translated as glorious hall) has been built nearly 300 years ago and houses 200.000 books today that are often older than the building itself. I was very impressed with the "holy halls" and can't wait to return there for a project that I'm currently preparing. #igersvienna

Included in these 7 million pieces are printed books, ancient works written on papyrus, maps, paintings, and so much more. The library is also residence of the Globe Museum, home to a vast array of globes and pieces relating to the study of celestial bodies, The Museum of Papyrus, with items from as far back as 2,000 BC, and The Esperanto Museum, a museum for Esperanto (a “made up” language, created in 1887 with the purpose of being a common language allowing people who spoke different native languages to communicate) and other constructed languages, among them Star Trek’s Klingon.

Entrance costs approximately $3.00, and visitors are welcome to join a guided tour for just $5.00 more.