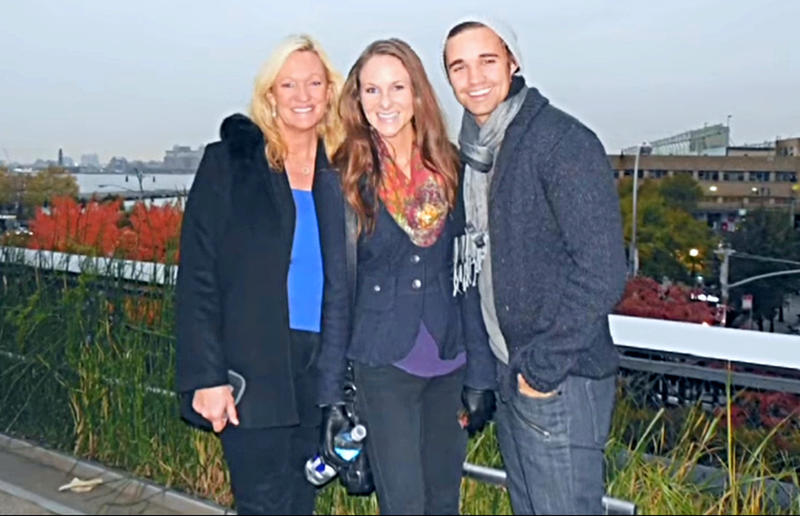 Karen wasn’t having the best day, emotionally, she really needed her family. A stroll through the city was helping her work through her emotional problems. She was relieved, so much so that she wanted to take a photo with her daughter and son-in-law to remember this moment forever.

That’s when she recognized the man that took their photo. It couldn’t really be him, could it?

Karen Kingsbury missed her father. It had been a years since he left, and she knew by now that the best she could do when she felt like this, was to reach out for family. They were always willing to help.

Kelsey, her daughter, knew how much her mother struggled without him. So, as soon as her mother called, Kelsey suggested a walk through Karen’s favorites parts of New York. They had no way of knowing that they would bump into a certain someone that would bring all of those feelings back to Karen

Kelsey and Kyle, her husband, dropped what they were doing and instantly made their way over to Karen’s New York home. It was just another Saturday morning, there was nothing special about it.

As soon as they got there the tree of the hopped in a cab and made their way to High Line in Manhattan. It was an elevated nature walkway far enough from the business of the city. Although she was in a calm and quiet place with her family, Karen still had the same thought spinning around in her head.

Whenever she would miss her father, she would hear his favorite song playing in her head. She couldn’t think of anything other than that.

His favorite song was ‘Have I Told You Lately?’ by Rod Stewart. The song meant so much to her father that Karen even had it engraved into the flowerpot by his grave. When Kelsey noticed her mother quietly humming the tune to herself, she knew she had to spice things up a bit.

“Let’s take a photo!” Kelsey tried to distract her mother from her emotions.  She knew Karen would never refuse the opportunity to add to her photo collection.

Karen’s face lit up for a second and Kelsey was relieved that her mother mind wasn’t being burden by her father’s passing, even if it was just for a few moments. There was one problem on the High Line, however.

With the invention of selfie sticks, it was hard to get a stranger to take your photo for you these days.

But in New York, it was almost impossible to get a stranger to do anything for you. As they were about to give up and take a selfie, a stranger in sunglasses stepped in to help.

He noticed them struggling to find someone to take their photo, so he offered to help.

The three of them posed together while the stranger took multiple photos of them, making sure that they would at least have one photo that they would be pleased with. When the man handed them the camera and started walking away, Kelsey realized that she recognized him.

Karen spoke to Kelsey with a smile, “The man took the picture, looked at it, and said, ‘Wow, that’s lovely.’” Karen said, but she could tell Kelsey was fixated on the stranger and hadn’t heard a thing she said.

“Mom, do you know who that is?” Kelsey asked with a frown. Karen focused her eyes on him as he turned to walk away. Could that really be him?

Kelsey had to confirm her suspicions so she quickly called for the man. He instantly turned around and removed his sunglasses from his face.

Karen’s jaw dropped open as she stared at the man. She knew exactly who he was and she was speechless. Kelsey asked him who he was, but she was not prepared for his answer.

“Are you Rod Stewart?” Kelsey asked. She couldn’t believe the coincidence. Her mom had been humming along to his song all morning and here he was.

“Yes, yes I am.” He answered casually. They were all stunned. Karen was not about to let him just walk away.

Karen explained to Rod everything she had been going through that day and how special that song was to her and the family.

The ‘Stay With Me’ singer listened to Karen’s story and started to well up. “You’ve made my day,” the star explained, before wishing the family well and continuing his walk. But that wasn’t the last time they would hear from Rod.

What Are The Odds?

“We seemed to always hear the song at times when Dad would’ve been so proud of us, wishing he were there,” Karen explained, still reeling over Rod Stewart himself turning up right at that moment.

“And I don’t doubt for a second that Dad had something to do with it,” she added. Perhaps she was onto something because the odds he would enter their lives again were astronomical.

Karen shared her lucky celebrity encounter on social media and before she knew it, she was approached by a producer from the ‘Today’ show to tell her story to a wider audience.

After recounting her tale, Karen was told that they had a special surprise for her. And that’s when the story took an even more surprising turn.

To her great surprise, Rod Stewart had recorded a special message for Karen. “It must’ve been divine intervention that brought us together that afternoon, and I’m glad it did,” said the rocker.

But even more surprisingly, Rod didn’t want to leave it at that. In front of a studio audience – and the whole of the United States – Rod revealed that he wanted to see Karen again.

Rod offered Karen and her family tickets to see one of his shows on tour, which was already incredibly generous.

“And I’ll dedicate a song to your late father, ‘Have I Told You Lately,’” Stewart added, which Karen simply couldn’t believe. She couldn’t have imagined a more perfect pick-me-up after what started out as a very sad day.